She just wanted her Sherman Oaks pub to survive. Then her video became a political talking point. 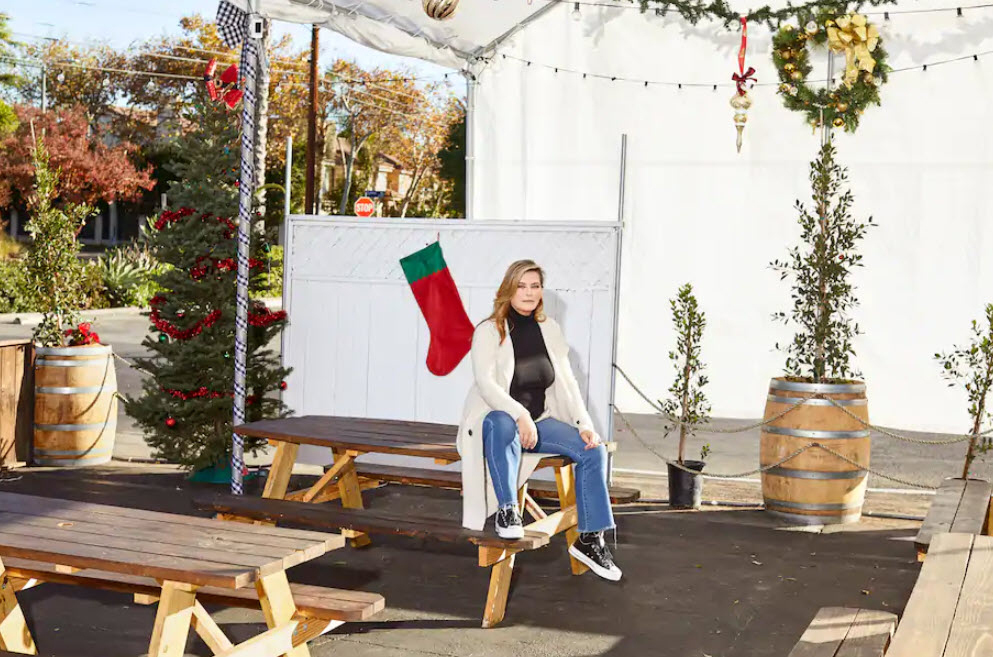 She moved to Los Angeles to become — what else?— an actor. Then dabbled in real estate. Studied to become a dental tech. But Angela Marsden has spent her life in restaurants since she was a teenager in Fort Wayne, Ind., serving coffee at Bob’s Big Boy and working the drive-through at Dairy Queen.

“I kept chasing the dreams for this and that, when I was happiest working restaurants,” says Marsden, 48.

This and that fell by the wayside. Working restaurants became her everything.

Ten years ago, she purchased Pineapple Hill Saloon & Grill in a Sherman Oaks strip mall with a silent partner. It has been there on Van Nuys Boulevard since 1978, an epoch for a restaurant. The joint is known for its wings, Reubens, bottomless mimosas and 26 beers on tap — lots of craft brews, but the top sellers are Coors Light and Bud Light.

“It feels like a bar from the Midwest. There are not that many left in L.A.,” Marsden says on the phone from the place she refers to as “the pub.” It’s a major Valley hangout for Vikings fans to cheer games.

Now, in a matter of days, Marsden has become an accidental spokeswoman for her pandemic-ravaged industry, after she railed in a searing video about the inequity and arbitrariness of civic ordinances costing restaurants thousands of dollars when they can’t pay their bills. The video, a little more than two minutes long, went viral Dec. 4.

Just as swiftly, Marsden became a symbol and a talking point for conservative, small-government Republicans who are incensed by pandemic restrictions imposed by Democrats. She has become a darling of Fox News, while some people have wished she would die and that her staff would get COVID-19.

The small-restaurant owner simply wants the pandemic and its economic ramifications to rise above partisanship.

“I’m losing everything,” a masked Marsden says in the video, near tears. “We cannot survive. My staff cannot survive.” After coronavirus cases spiked in Los Angeles, restaurant owners like Marsden were ordered to shut down outdoor seating before Thanksgiving, yet catering services for the production of the NBC series “Good Girls” were permitted a few feet away in the same parking lot. They look virtually the same, except the production’s dining area is substantially larger.

“Tell me that this is dangerous,” she says incredulously, gesturing to the two spaces. “But right next to me, as a slap in my face, that’s safe.”

She calls out two Democrats, Los Angeles Mayor Eric Garcetti and California Gov. Gavin Newsom, whose state is the latest coronavirus epicenter. Garcetti ruled that movie and television productions are essential businesses and are exempt from the latest stay-at-home order. Marsden also helped organize a protest outside of the home of Los Angeles County Supervisor Sheila Kuehl, another Democrat. This is California, after all, where Democrats control pretty much everything.

“My heart goes out to Ms. Marsden and the workers at the Pineapple Hill Saloon who have to comply with state and county public health restrictions that close outdoor dining,” Garcetti said in a public statement. A few days before Marsden’s video, he ordered $800 one-time payments for 4,000 out-of-work restaurant workers.

The governor’s press office states via email that catering on a production is “for the closed universe of people working on the set. . . . It is not open to the general public — so these supportive services for film crews are not encouraging mixing of households that are not already interacting.”

But politics has infected almost everything. The entertainment industry is viewed as powerful and notoriously liberal by conservatives. Here was a story of a Valley David, a bar owner, indirectly calling out a Goliath, NBC, which includes left-listing MSNBC.

Donald Trump Jr. was among the first people to retweet the video. (He happens to date Newsom’s ex-wife, Kimberly Guilfoyle.) In a speech on the House floor, railing against Democratic Speaker Nancy Pelosi, Rep. Dan Crenshaw (R-Tex.) invoked Marsden’s name. “Everyone should have to watch that video,” he says, noting that “she represents millions of Americans suffering.”

Video of Crenshaw’s speech was posted by Dinesh D’Souza and viewed almost 1 million times. The Wall Street Journal’s Daniel Henninger cited Marsden as representative of “the new covid resistance” against Democrats. She has been embraced by conservative talk-show host Howie Carr and podcaster Dave Rubin, the latter appearing at her protest outside of Kuehl’s home. All in a matter of days.

The same day her video went viral, Marsden launched a GoFundMe page, which has raised more than $200,000 from more than 4,000 individuals. Many donations are noted with emphatic political messaging. “I hate tyranny and the elite leftist,” wrote one donor. “It’s clear that CA Democratic politicians are beholden to lobbyists not the working man or woman. It’s shameful! It’s time to remove them from office,” noted another.

Marsden has appeared multiple times on Fox News, with Lou Dobbs, Neil Cavuto, “Fox & Friends Weekend” and Sean Hannity, who has promoted her GoFundMe plea. Fox also did a report calling out NBC for not mentioning that the catering tents in her video were for the network’s “Good Girls.”

She has been most pointed in her criticism of Newsom. In interviews, Marsden has blasted him for dining at the tony Napa Valley French Laundry in a partially enclosed space in November. “His winery has been open the entire time. His winery has not closed one day,” Marsden tells me. Wineries have been designated an essential business in California, and a spokesperson for Newsom’s says it has complied with guidelines.

Marsden says her aim is not to pick political sides: “I’ve also appeared on MSNBC.” She has done local, national and international interviews, speaking with anyone who asks.

One of her bartenders, Liz McCracken, has been deputized as her scheduler and publicist. She set up our interview by calling me “Babe.” Another bartender handles videos and social media. A third, an aspiring makeup artist, does Marsden’s glam for interviews.

Marsden is behind on her bar’s $10,000 monthly rent. Her monthly payroll was around $25,000 when she could afford to employ 15 people. She took out a disaster relief loan, spending roughly $60,000 to comply with coronavirus protocols, installing plexiglass partitions and erecting outdoor space, all while serving far fewer customers.

“I’ve done everything they asked me to do,” she says. “I wanted to be known as someone who did everything to keep their clients and staff safe.”Savings? “This place is my retirement.”

There was a brief period in June when coronavirus cases dropped, the weather behaved and Pineapple Hill went from hemorrhaging $35,000 a month to losing only $12,000. Then the heat wave hit. Now that outdoor dining has been shuttered until virus cases drop, Marsden has reverted to takeout only. It’s hard to make the monthly nut on Reubens and wings.Marsden is the sort of person who shares her history of heartache with a stranger and cries easily, especially when talking about Pineapple Hill.

“This is about people. I don’t care if they’re Republican or Democrat. They have to start working for our people,” she says. “We are having a humanitarian crisis right before our eyes.”

She doesn’t know when she can reopen. She doesn’t understand why television and movies, backed by rich corporations, can serve food outdoors while Pineapple Hill, following every order, can’t. All this, and the rainy months of January and February, may make a return to outdoor dining a challenge.

“They’re killing us. I can’t take the hypocrisy anymore. Let’s get this fighting and bickering over,” Marsden says. “Know what? I am not doing okay.”