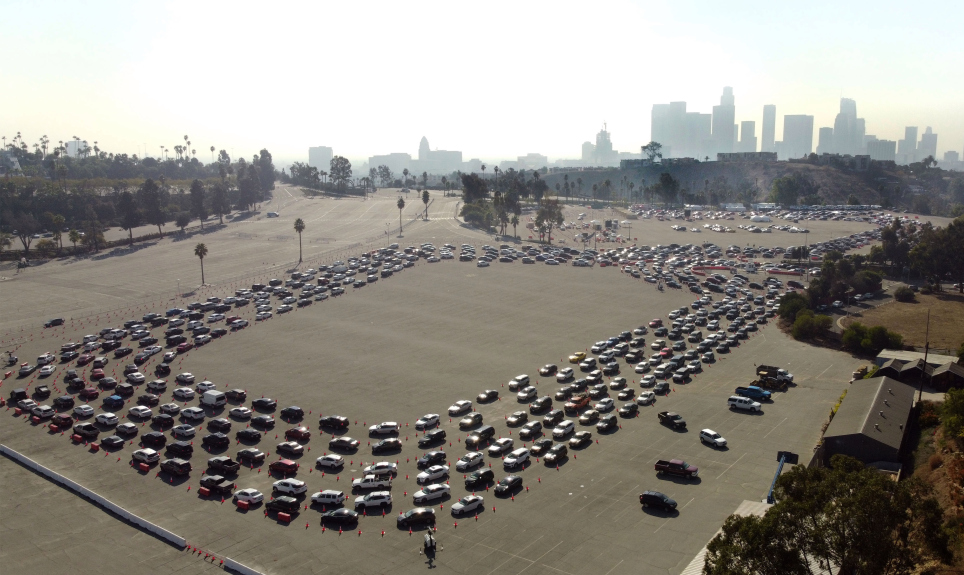 With Los Angeles County health officials projecting that January would become the worst month yet of the worsening pandemic, several local hospitals declared “internal disasters” over the weekend.

That status can be triggered by extreme conditions that could put patients at risk, such as severe staffing shortages or an overflow of patients during a natural disaster — and can mean hospital doors are closed to all ambulances. So far, however, no local hospital has needed to declare that it was operating under crisis care guidelines, a more severe declaration that can lead to rationing.

“Every day it just grows and grows,” Health Services Director Christina Ghaly said on Monday, Jan. 4, describing waves of new coronavirus patients topping 800 per day. Hundreds of patients are discharged daily, she said, but the rate can’t keep pace with new admissions, forcing local hospital officials to make increasingly tough decisions. In all, 7,898 patients are being treated at the county’s hospitals, 1,627 of them in intensive care units, according to the state.

With its  death toll now at 10,850 individuals, L.A. County was losing someone to COVID-19 on average every 15 minutes, nearly matching all other causes of death combined. Officials reported 77 more deaths and 9,142 new cases Monday, but those figures were reduced by holiday reporting lags and testing-center closures.

Officials got word that additional testing centers, however, would open in the region and that sites shut down for the holidays were reopening — including the mammoth Dodger Stadium facility, which rolled out a improvements aimed at smoothing out the process and easing traffic.

Also, Gov. Gavin Newsom announced that some 612,000 more vaccines are headed to California and vowed to accelerate the delivery of inoculations across the state,  expand the number of distribution sites and the broaden types of people who can give the shots.

Experts: Worst yet to come

Given the numbers of new infections, now at more than 14,000 per day on average over the past week, a surge from the Christmas and New Years holidays was almost certainly expected to arrive in January, officials said.

In slightly more than a month, the county doubled the number of total confirmed cases, now up to 827,498.

“The worst is almost certainly still ahead of us,” Ghaly said. “All hospitals are being inundated with COVID patients.”

Public Health Director Barbara Ferrer said the pandemic is beginning to affect not only those who have COVID-19, but other patients as well.

“Those who have a stroke or heart attack or experience a traumatic injury are finding it more difficult to access care than they did a month ago,” said Public Health Director Barbara Ferrer.

Between 70 to 90% of L.A. County hospitals were on diversion in recent days overall between 50 to 70% of the time. That’s a bit shorter than a few weeks ago, but still a troubling sign in what continues to be a grim peak in the pandemic.

Despite being on internal diversion or internal disaster on and off at Beverly Hospital over the weekend, Steve Brand, public information officer said the hospital was still fully operational with no untold issues.

The hospital has received temporary waivers to relax staffing requirements to handle more patients, and the Army Corps of Engineers was recently on site to evaluate what was needed in terms of its oxygen supplies, Brand said.

“Everyone is working hard and under a lot of stress right now, but I would not call it dire by any shape or form,” Brand said.

As county officials stepped up their pleas for individuals to wear masks and not to gather, others continued to protest the health officer orders. Following reports of additional protests over the weekend, L.A. County Board of Supervisors Chair Hilda L. Solis, said it’s “very counterproductive.”

“Our public health officials have one mission, to safeguard the public’s health. They are not the ones to blame,” Solis said, adding that the virus is not “a hoax.”

Next wave for vaccines

On the vaccine front, Newsom said the state has received nearly 1.3 million doses from Pfizer and Moderna, and another 611,500 doses have been shipped to the state. As of Sunday, however, a total of 454,306 doses had actually been administered.

“We are working aggressively to accelerate our pace,” Newsom said. “… We’re going to start seeing more rapid distribution of vaccines, I can assure you of that. That said, it’s gone too slowly, I know, for many of us. All of us, I think, we want to see 100% of what’s received immediately administered in people’s arms.

Newsom said the state is working to increase the number of sites where shots can be administered and the people who can give the shots, including dentists, pharmacy technicians and members of the National Guard.

The governor said he has heard “anecdotal evidence” about frontline health care workers — the top priority for receiving the shots — declining to be vaccinated, but he had no specific numbers. He said the state is conducting a survey to get a better idea of the number.

In L.A. County, Ferrer said she would like to see skilled nursing facilities move faster on administering doses.

So far, 206 facilities have received vaccines for staff and residents and about 60 have chosen to receive vaccines directly. There are 340 countywide.

“We do need the vaccinations to get into people’s arms at a much faster clip at our skilled nursing facilities,” Ferrer said.

The next shipment of 82,745 Pfizer vaccines were expected to be used as the second dose for hospital workers. Another 50,700 Moderna vaccines were also expected this week.

The Dodger Stadium COVID-19 testing site, reopened Monday after a weekend closure for restructuring to alleviate traffic in the area, has administered 1 million COVID-19 tests since May, according to Mayor Eric Garcetti. Residents in the area have expressed concern about traffic caused by the site, so it was closed over the weekend to be restructured and for testing operations to be rerouted.

“The Dodgers are committed to doing our part in the battle against COVID-19 by ensuring that testing continues to be available to all Angelenos, especially with the ongoing surge in cases and increase in demand for testing in Los Angeles,” Los Angeles Dodgers President and CEO Stan Kasten said.

“Surpassing one million tests at Dodger Stadium is a sobering reminder of just how many families have been affected by this terrible pandemic, and we thank the city and all our partners on the frontlines that continue to provide lifesaving services to our community.”

On Friday, Hansen Dam opened a vaccine site at its testing facility, joining Lincoln Park Recreation Center, San Fernando Park and the Crenshaw Christian Center in South Los Angeles. The four sites were chosen in areas most affected by the pandemic, officials said.

On watch for new variant

Although the more-contagious variant of COVID-19 first detected in the United Kingdom has not been found in Los Angles County yet, health officials urged residents to remain cautious. So far, there are four confirmed cases in San Diego and two in San Bernardino, according to Newsom.

“Although we haven’t confirmed the COVID-19 variants presence in LA County, we know it is nearby making these gatherings often mask-less even more concerning,” Solis said.

Ferrer echoed the statement, adding that with recording 10,000 plus new cases every day, it is “highly likely” that the new variant will eventually be found in L.A. County.

“For us, it means really doubling down on all of our efforts to prevent transmission because this variant is actually more easily transmitted from person to person,” she said.

“In part, because many of these areas are comprised of essential workers,” she said.