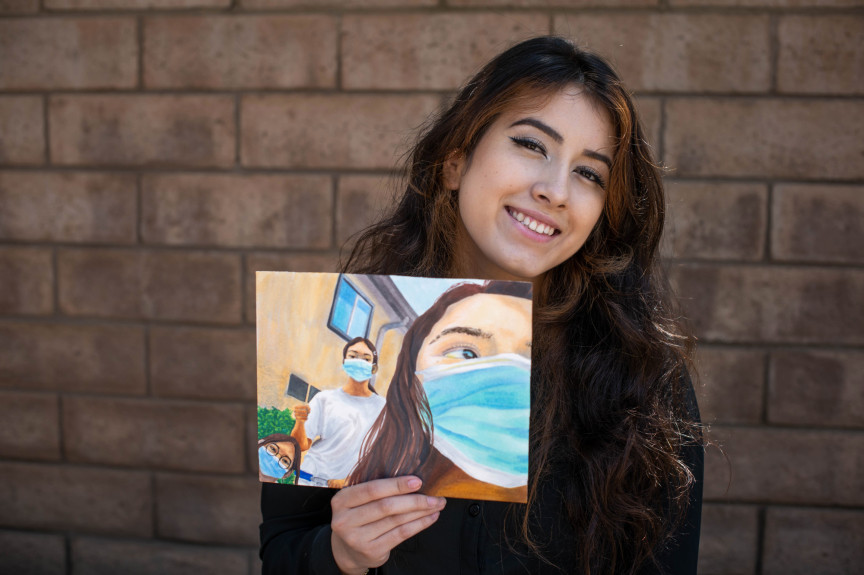 Because the year 2020 wasn’t turning out to be the very best for 17-year-old Kathia Hernandez, she wanted to capture one of the happiest moments of the pandemic in an art piece that won first place in a local congressional art contest.

Kathia, a senior at Cesar E Chavez Learning Academy in San Fernando, created “Skating Summer Days” of her skateboarding in a Sylmar neighborhood with her good friend and her friend’s sister in alcohol-based markers on thick white paper from a photo selfie in an annual competition sponsored by Rep. Tony Cardenas, D-Panorama City.

Kathia, a Sylmar resident, drew herself and her longtime friend, Ysabel, and her friend’s sister, Madison, in cool and warm tones true to the actual photo of three masked brown-haired, brown-eyed girls in front of a two-story building apartment complex.

When she took the selfie on Oct. 2, she had started thinking about making it into a significant art piece.

The first-place prize for the congressional art competition is a free, round-trip ticket to Washington DC, along with hotel accommodations, a reception and a ceremony documenting her win side-by-side with other aspiring nationwide student artists.

The artwork will be displayed in the tunnel that connects the House offices with the Capitol building once pandemic ramifications can be worked out.

The Congressional Art Competition began in 1982 to provide an opportunity for Congress members to encourage and recognize the artistic talents of young constituents. Since then, hundreds of thousands of high school students have been involved.

“I think the reason why we see so much talent over and over (in my district) is because these young people have a heart, a want and will to express,” he said. “A lot of them are really shy in other ways but when it comes to their art, they shine and I love it and the pandemic or no pandemic I want to be sure people know no matter what is going on they are on our minds, we care about them, we love them and we love to see them express themselves and that’s one of the reasons why I love art is because it’s a form of expression.”

Jess Perry-Martin has been Kathia’s visual arts teacher for the past four years and has seen her talent progress.

“Kathia has the ability to express things from a very personal level and make them relate,” Perry-Martin said. “She often looks within herself for the stories she is telling and then because the stories are so uniquely personal to her, there’s something about them that makes them really easy to identify with.”

Perry-Martin said Katia’s stories are about documenting particular moments in time and much of her artwork over the past four years have been about her experiences.

“Her family is from Mexico and she has gone back and forth to Mexico many times with her family and has had some powerful experiences there,” Perry-Martin said. “A lot of her art documents her relationship with her parents and how hard they work for her and how much respect she has for them, which has been really beautiful to see.”

Artwork by the other San Fernando Valley student runners-up will have their artwork displayed in Cárdenas’ Panorama office.

Her piece called “Bauler Gaan” (Song of the Baul), created on a black scratch board known as scratch art, winning her a $300 Visa gift card.

Rokshana used an X-Acto knife and scratched the paper to reveal the white color on the bottom.

“A bauler is a nomadic musician often times seen wearing white or yellow clothing,” Rokshana said. “I got this idea because I grew up in a village in Bangladesh. I remember these baulers would come to our homes sometimes and they would just play their music in a courtyard. And then when we moved to America, my father would listen to their music on You-Tube.”

Rokshana wanted to do a piece related to the music of Bangladesh that became contest worthy.

“I thought of doing a bauler, because I just love how their music feels so organic,” she said. “I have memories of listening to their songs and it’s very nostalgic which is why I wanted to create that memory in my art.”

She came to America when she was four years old traveling from New York and eventually to California via a lottery system.

This was her second art contest entry and last month she competed in the regional Muslin Interscholastic Tournament, the theme of which was community and healing, and she grabbed first prize for a digital art piece.

Art, for her, is a hobby. In college she wants to major in integrated biology and she sees herself on the path toward solving humanitarian crises and uplifting social consciousness.