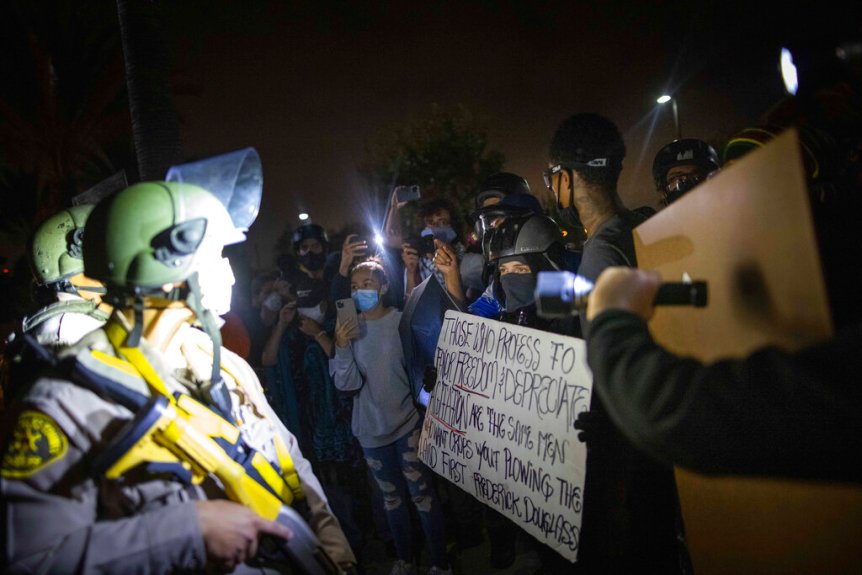 A crowd gathered early Tuesday morning outside the Los Angeles County Sheriff’s Department’s South Los Angeles Station to protest the death of a Black man who allegedly punched a deputy, had a handgun and was shot and killed by deputies in the unincorporated Westmont area.

The shooting occurred about 3:15 p.m. Monday near West 109th Place and South Budlong Avenue, according to sheriff’s Deputy Juanita Navarro-Suarez.

Dozens of protesters were at the scene by Monday night.

Demonstrators moved from the neighborhood where the shooting occurred to the sheriff’s station at 1310 W. Imperial Highway around midnight. Authorities declared an unlawful assembly shortly after midnight as the crowd chanted derogatory, anti-law enforcement slogans, as a line of deputies stood watch in front of the building.

Protesters vandalized and sprayed graffiti on the sheriff’s sign outside the building before leaving the area around 1 a.m.

The man who was killed had been riding a bicycle when deputies attempted to stop him for code violations, Navarro-Suarez said. He left his bicycle and ran away, but deputies caught up to him and a fight ensued.

“Immediately upon making contact with our suspect, our suspect was holding some items of clothing in his hands, punched one of the officers in the face and then dropped the items in his hands,” sheriff’s Lt. Brandon Dean told reporters.

“The deputies noticed that inside the clothing items he dropped was a black semi-automatic handgun, at which time a deputy-involved shooting occurred. He was in possession of a firearm and did assault a deputy.”

Two deputies opened fire and shot him several times, Navarro said. He was pronounced dead at the scene.

No deputies were injured.

Video from the scene showed a gun near the man’s body.

The man was identified by family members as Dijon Kizzee, 29, according to multiple broadcast reports.

“Los Angeles County Sheriffs killed a Black man … Dijon … on 109th and Budlong and left his body face down in the dirt. We need all hands on deck,” Black Lives Matter Los Angeles tweeted.

A response was not immediately available from the sheriff’s department regarding Black Lives Matter’s allegation that the victim was left “face down in the dirt,” but Navarro-Suarez said it would be part of the investigation.