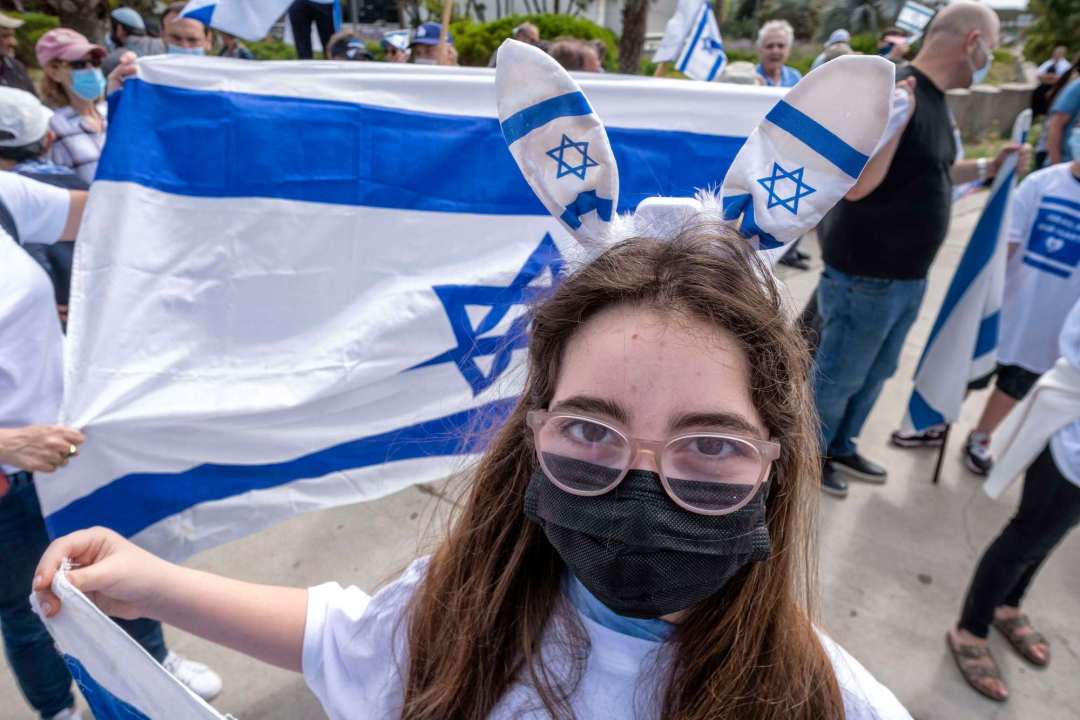 A crowd gathered outside the federal building in west Los Angeles on Wednesday, May 12, to show support for Israel and to call for an end to rocket launching at the country by Hamas, an Islamist political organization and militant group.

At least 100 demonstrators carried signs, and many drove around the block in their cars while honking their horns and waving flags out their window. Among these flags were hybrid banners, half of the Israeli flag and half of the American flag, symbolizing the statue of many protestors as both Americans and Jewish people supporting Israel.

The protests comes just a day after pro-Palestine protestors gathered outside the Israeli consulate, no more than two miles from the site of Wednesday’s protest.

Tension between Israelis and Palestinians in the Middle East, while perpetually bubbling under the surface, have spurred some of the worst violence the region has seen in years.

Bombs in Gaza have killed at least 65 people in recent days, including 14 children, and at least seven people in Israel are dead, according to the BBC.

Israel on Wednesday pressed ahead with a fierce military offensive in the Gaza Strip, killing as many as 10 senior Hamas military figures and toppling a pair of high-rise towers housing Hamas facilities in a series of airstrikes. The Islamic militant group showed no signs of backing down and fired hundreds of rockets at Israeli cities.

Rioting and mob violence between Arabs and Jews have also through towns and cities across Israel.

Animosity between Israelis and Palestinians stretches back several decades to the post-World War II era when Palestinians were displaced to make room for Jewish refugees following the Holocaust. Many Palestinians now desire the right of return – the right of the displaced and their descendants to return to the land that once belonged to them. Both sides maintain that the area is their rightful homeland.

Recent clashes between Israel and Hamas, as well as other militant groups, have been largely triggered by disputes over holy locations in Jerusalem and claims of discriminatory policies by Israeli government toward Palestinians living there.

Those policies have also spurred protests by Palestinians living in Israel, some of them leading to bloody skirmishes with police. Israeli police fired rubbed bullets and stun grenades at Palestinian youth in the Al-Asqa mosque, a holy site for both Jews and Muslims, this past weekend after the youth threw rocks at them.

Israeli police said that violence in regions with mixed Arab and Jewish Wednesday night led to 374 arrests and 36 injured officers.

Tor Wennesland, the United Nations Middle East envoy, warned via Twitter that the conflict could be moving toward full scale war. The United Nations has called for an immediate cease fire in the region.

Roz Rothstein, chief executive officer of international Israeli education program StandWithUs and organizer of the protest, said that Israel’s mission isn’t to kill anyone and her organization wants the fighting to end as well.

“Israel wants peace,” Rothstein said. “We are calling for an immediate end to rocket attacks and, ultimately, peace.”

Rothstein also criticized Hamas for its lack of nation building, saying that the organization chooses to use its resources to attack Israel instead of building schools and other infrastructure.

Meanwhile, officials in several Arab countries, have decried Israel’s actions. Saudi Arabia condemned “in the strongest terms the blatant attacks carried out by the Israeli occupation forces against the sanctity of the Al Aqsa Mosque.” In Kuwait and Istanbul, anti-Israel protests were staged Tuesday night.