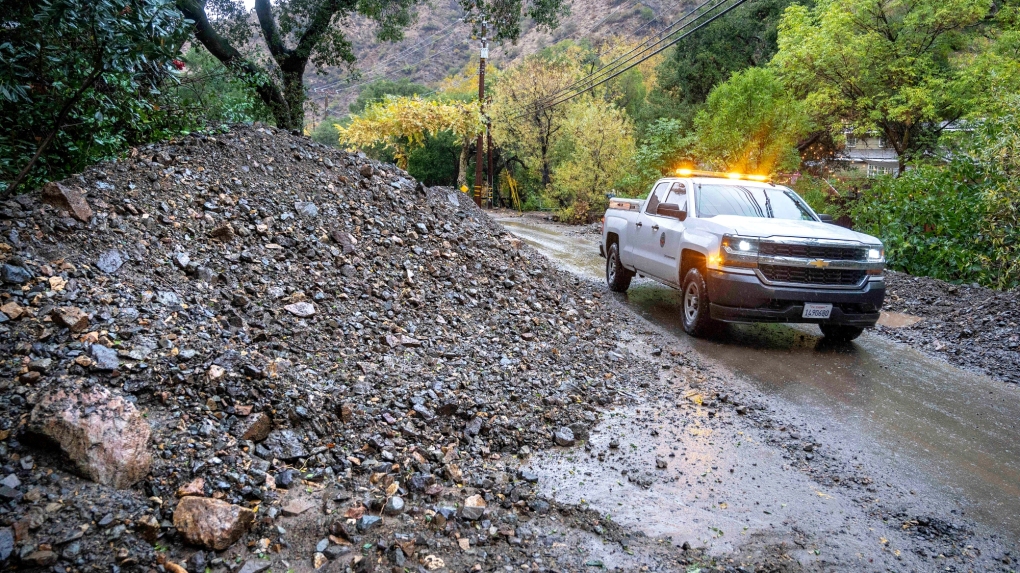 The rainfall kept Los Angeles city firefighters busy, with at least two vehicles getting swept into the Los Angeles River — where they were stuck against a bridge column just north of Washington Boulevard in downtown Los Angeles. At least one of the vehicles was pushed farther south.

No victims had been located.

But city firefighters did find and rescue a 26-year-old man who had fallen into the river channel near Sylmar High School Tuesday morning, officials said. The man, taken out of the river through a maintenance hole, suffered minor injuries and mild hypothermia.

Elsewhere, the rains were accompanied by heavy wind gusts that knocked over trees in Whittier and Monrovia, and a power pole in Buena Park.

In Laguna Beach, large rocks toppled onto Laguna Canyon Road, leading to a lane closure, while motorists trudged through flooding along Pacific Coast Highway and Broadway.

And flooding hit San Fernando Valley roads as well as a neighborhood in Lake Forest, where water strandeed a SUV driver in a road.

Additional evacuation orders and warnings were in place in the Inland Empire.

#Whittier city tree down on my street. No injuries. #LArain pic.twitter.com/YPaeV1eNz4

6,912 customers who lost power were in Los Angeles County, 477 were in Orange County, 1,300 customers were in Riverside County and 4,395 were in San Bernardino County, according to the outage map. After larger-scale outages in the City of Riverside earlier in the day, only 69 remained without power as of 6:30 p.m., according to Riverside Public Utilities.

By 5 p.m., most areas in Los Angeles County, Orange County and the Inland Empire had seen between an inch-and-a-half to two-and-a-half inches of rain, meteorologists said. Lake Forest received 2.55 inches of rain while Villa Park Dam on Santiago Creek got just over 4 inches of rain in an isolated incident, said Brandt Maxwell, meteorologist with the National Weather Service’s San Diego office.

In the Los Angeles County mountains, seven inches of rain were recorded in some spots and 4 inches of snow was measured in Mountain High, said Kristen Stewart, a meteorologist with the NWS’ Los Angeles office.