Porto’s pitches its tent for now in Northridge; brick-and-mortar bakery coming in fall 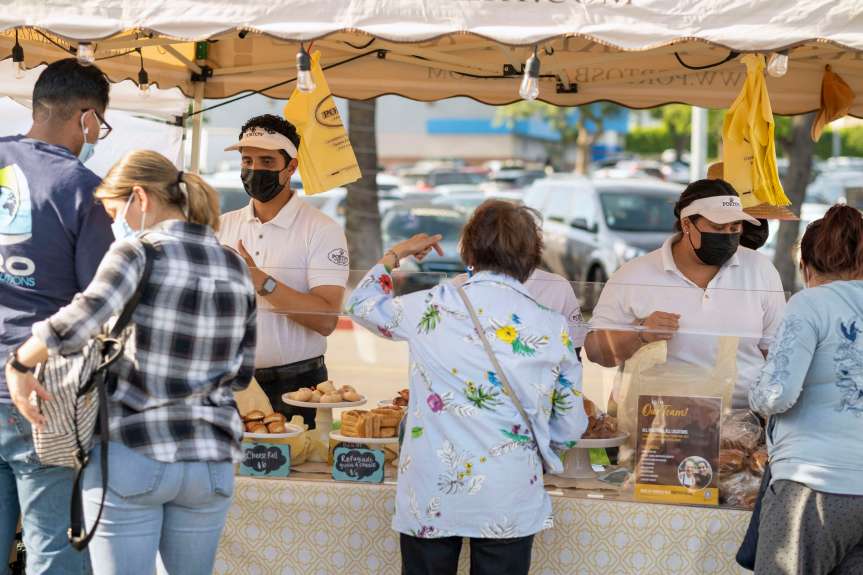 Farmer’s marketgoers at the Northridge Fashion Center on Wednesday seem to have a bit of an appetite at the popular Porto’s Bakery and Café tent where they mulled over the menu and were seen chatting on cells (with presumably somebody on the other end putting in their order too).

This was the third week the much-anticipated bakery pitched its tent at the mall, hoping to satisfy a yearning crowd waiting for the actual store to open this fall in the former Sears automotive building facing Nordhoff Street.

Beatriz “Betty” Porto said she had never seen such a craving for her family’s products despite only 12 of the many items they usually offer available.

“I’ve never done a market that’s so busy in my life” Porto said. “I don’t see people walking around looking at stuff, they are just going and lining up in front of my tent. If this is an insight as to what is coming, we are going to get a lot of people.”

The Northridge location is the sixth Southern California business venture for the Cuban-family-operations, which started decades ago with Rosa Porto’s love to share cakes and pastries with friends and family.

Marsha McGregor of Northridge went to Burbank to get her fix of cheese rolls and guava and cheese strudels. Upon learning the bakery was coming near to where she lived, it brought back memories and she was reminded of their reputation.

“I wanted the potato balls, but they are not here,” McGregor said. “Guess I’ll have to wait until October. But, the number one thing is they are in my neighborhood and is the only thing I care about despite all the other construction going on around here.”

Credit cards are not accepted, but a handy ATM machine was nearby for those without it.

Jennifer Krowne normally drove to the Burbank location and was happy to learn Porto’s was in her Northridge neighborhood.

“We have five kids and they are all fans,” Krowne said. “What I have seen on social boards is that everyone seems excited.”

Jasson Valenzo heard about Porto’s coming to the farmers market from his girlfriend.

But on Wednesday, Valenzo was glad he snagged a dulce de leche cake and some cookies before they sold out.

“I’m excited for the actual opening, because they have a bunch of things on the menu I actually enjoy,” he added.

Araseli Flores of Mission Hills came to the farmers market with her husband, but went home with some chocolate croissants and cheese guava strudel for her co-workers.

“It’s teacher appreciation week,” Flores said. “I can’t wait to give these to my co-workers. They keep asking about them.”

Carlos Vargas of Van Nuys primarily frequented the Glendale store, so knowing Porto’s was opening in Northridge was inviting.

“The drive was worth it, but to have one closer to where I live, I’ll be able to come by and pick up more often,” Vargas said.

The Porto family is pouring $5-million to remodel and upgrade the Northridge location to their specifications.

So far only the plumbing and electric are signs of their financial commitment.

But Raul Porto Jr. is confident an October opening date will come to pass.

The project has been five years in the making.

“And then negotiating with the mall took a while too, because it was sold while we were in the process several times,” Porto said.

Initially, the thought was to tear down the former Sears automotive center.

But that idea was nixed.

“We had an opportunity to tear it down but it was still a good building, it still had good bones and we just thought that it was better not to be so wasteful and take it down,” he added.

Porto’s operations have weathered the pandemic storm and appears to have come out on top.

Operations pivoted from dine-in only to online orders for in-car pickup for the first time in its 46-year history.

It also beefed up its Bake at Home taking holiday orders of select frozen pastries that are shipped nationwide.

For the most part all of the employees are back at work or at least who wanted to be.

The company is currently hiring senior level management including bakers who train for months to learn the Porto’s way of decorating a cake and getting their products down pat.