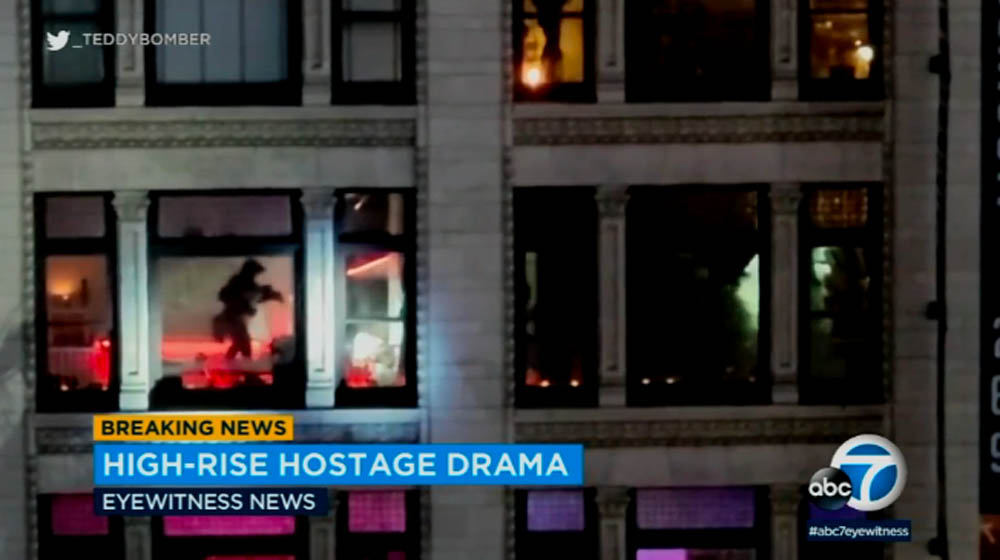 Los Angeles police shot and killed a man who took a woman hostage in a downtown Los Angeles high-rise apartment after shooting randomly at a group of people inside a business and attempting to carjack another female victim.

“What we know now is that the suspect had initially approached a man on the sidewalk near 8th and Broadway,” according to the tweet. “The suspect held a gun to the man’s face and pulled the trigger. Fortunately, the gun did not fire.

“The suspect then went to a business in the 700 block of Broadway. When he entered the business there were three family members inside. One of them was a 14 year old,” police continued. “The suspect pointed the gun at the group and fired at them. One of those rounds grazed the side of the 14 year old’s head. He’s currently at a local hospital receiving medical treatment and is expected to survive.

“The suspect then proceeded to the area 6th and Spring. There he attempted to carjack a female who was standing outside of her vehicle. He was unable to get inside of the car and fled to 7th and Spring. At 7th and Spring he struggled with a man that was riding a bike. That man saw the suspect reach into his waistband where he was still armed with a gun.”

Officers chased the suspect, who ran into an apartment complex at 6th and Main. They established a perimeter and began requesting additional resources, including SWAT and a K-9 unit.

“While a tactical plan was being put in place, officers became aware of surveillance footage from inside the apartment complex,” police said. “They (officers) saw the suspect in a hallway armed with a gun forcing a female to come with him.”

In a statement issued Saturday, police said: “At that point, we knew we had a hostage situation. While LAPD personnel were outside of the complex they saw through a window, the suspect holding a gun to the hostage’s head. Based on the already incredibly violent actions and fearing the suspect was going to kill the hostage, SWAT entered the apartment. An OIS (officer-involved shooting) occurred and the suspect was struck by gunfire and has died at scene.”

Video taken by a Twitter user who was in a building near the high-rise showed the man holding a gun to the hostage’s head and dragging her to different areas of the apartment before several police officers equipped with tactical gear entered the room. Several gunshots are heard before the video ends.

The woman was taken to a hospital, and her condition was unavailable Saturday. The name of the suspect will be released pending notification of family, according to the Los Angeles County coroner’s office