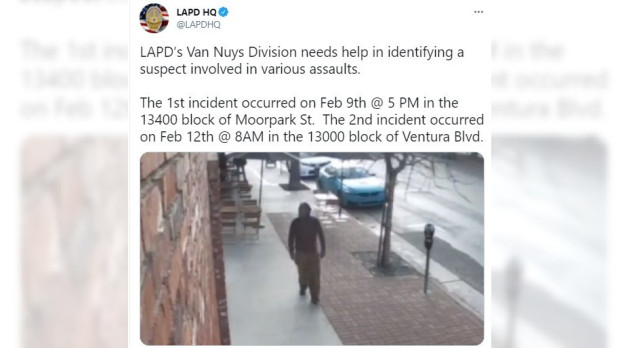 Police circulated video footage Saturday of a man they believe is connected to various assaults in the Sherman Oaks area.

On March 9, at about 9 p.m., a woman was walking her dog on the sidewalk when a man approached her from behind, grabbed her by the neck and threw her to the ground. He then punched her and attempted to strangle her, the Los Angeles Police Department reported.

The suspect stopped the attack when a passerby intervened. The suspect then fled on foot through an alley located south of Ventura Boulevard and east of Murrieta Avenue.

The suspect was described as a 5-feet-6-inch tall Black male with a muscular build, between 25 to 35 years old, weighing approximately 150 pounds. He was last seen wearing a hooded black sweatshirt with a large emblem on the front, dark jeans, and black shoes with a white stripe along the side.

Detectives at the LAPD’s Van Nuys station urged anyone with information regarding the attacks to call them at 818-374-0085.