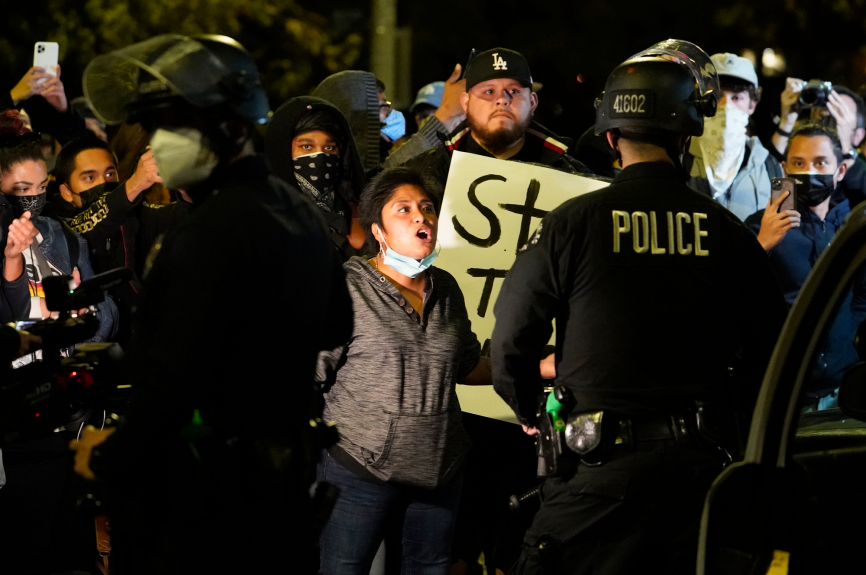 Police clashed with crowds of demonstrators who refused to disperse from Los Angeles’ Echo Park Lake on Wednesday, March 24, in protest of the city’s plans to close the park for refurbishment and force residents of a homeless encampment to move.

A citywide tactical alert was issued as LAPD officers clad in riot gear declared multiple unlawful assembly and dispersal orders while city contractors began building fences along the edges of the park.

Several protesters confronted officers carrying what appeared to be less-than-lethal weapons and plastic handcuffs while blocking access to the park.

Other demonstrators could be heard chanting nearby “we are neighbors” and other slogans. At around 10 p.m., columns of police began to physically move crowds away from the park as non-irritating smoke wafted through the street. Many pushed back, or lay down in the street to block their attempts to disperse the area.

“Two unlawful assemblies were declared and dispersal orders were issued at Santa Ynez Street and Glendale Blvd due to officers being assaulted with rocks, bottles and smoke bombs,” LAPD officials tweeted. “Fencing is being installed and police will be there overnight.”

Some in the crowd advised those unwilling to get arrested to leave the area. No arrests were immediately announced, however, but at least one person appeared to be detained in livestreaming video recorded at the park.

“The Los Angeles Police Department continues to ask for calm and cooperation as the installation of fencing in support of the Echo Park rehabilitation effort continues,” the department tweeted about 11:10 p.m.

Several dozen tents and at least 30 demonstrators remained at the park Wednesday evening, after city officials said more than 120 people were moved to various temporary shelter sites during the past week.

The crowd grew to around 200 during the course of the evening. Police vehicles and dozens of officers lined up at the northwest corner of the park, along Glendale Boulevard and Park Avenue by 8:30 p.m. The California Highway Patrol had blocked the Echo Park Avenue off-ramp from the 101 Freeway about 10 p.m.

“The Los Angeles Police Department was asked to support community safety efforts during installation of the fencing to assist in the rehabilitation of Echo Park,” Los Anglees City Council Member for District 13, Mitch O’Farrell said in a statement posted shortly before 10:30 p.m. “Department personnel are deployed in that area so that those efforts can begin in a safe and unimpeded manner.” O’Farrell tweeted that homeless service providers would be at the park Thursday to offer shelter to anyone still camped at the lake.

According to O’Farrell’s office, the work will include repairs to damaged lighting and plumbing, removal of hazardous material and public safety improvements. About $600,000 worth of work was planned at the encampment.

“I’m hearing that the closure of Echo Park Lake is, in fact, planned to go forward this evening,” Los Angeles City Council Woman Nithya Raman said Wednesday evening on social media. “While I’ve been happy to see so many people from the lake being housed over the last few days, a forced and sudden eviction is not the way to move forward now.”

People living at the encampment would have a 24-hour window to get their belongings out of the area, according to signs posted at the park Wednesday evening. Encampment dwellers were told that any property still in the area may be collected and stored by the nonprofit Chrysalis at 1146 Glendale Boulevard. Items not retrieved within 90 days may be discarded.

Police were also reported staging at nearby Dodger Stadium, where buses and sanitation trucks were also visible.

Journalists were directed to the intersection of Park Avenue and Glendale Boulevard, and some were not permitted to leave that area to observe the confrontations happening around the lake.

“I was told it’s going to be a long operation,” LAPD Sgt. Dominic Santiago said just minutes before police announced declared the demonstration an unlawful assembly and threatened to arrest those who failed to disperse.

Back at the encampment, residents were chatting and lining up for meals at a community kitchen area set up along the edge of the lake while demonstrators and law enforcement clashed around them.

Lines of police remained of 11:30 p.m. as well as numerous protestors standing with their arms linked. People were still barred from entering the area, but those already inside the area — and people living in the tents scattered around the park — would be allowed to remain overnight, Chief Michel Moore said via  social media at 11:42 p.m.

Just after midnight, following news that the LAPD was not intending to remove the encampment residents, many of the activists began to make their way out of the park, but said they would return the next day.

Ayman Ahmed, who lives at the park, encouraged people to head toward the lake to celebrate: “Tomorrow is a new day to fight, but tonight we won.”

Max Thomas, who lives in the Echo Park encampment, watched the gathering protesters and police skirmish lines from across the street. He has lived at the lake since April and said he did not receive a notice from officials about the impending removal. Thomas was waiting to learn whether he would be able to retrieve his belongings Wednesday evening while holding on to a duffel bag filled with clothes and enough food to live off for five days he said.

Several unhoused people who remained at the park said they did not want to give up the self-run community they have built. Earlier in the day, several phoned into a City Council meeting demanding that they be given better options — or be allowed to stay.

One woman who identified herself as Queen told elected officials that “we will not leave. We will stand today, tomorrow and every other day that needs it.”

The park dwellers never sought to be unhoused, she said, “but if you want us out, you need to come with reliable, sustainable, long-lasting, permanent solutions, not dog scraps.”

Several said they aimed to secure a meeting with O’Farrell, who represents the area and is coordinating the clearing out and closure of the park.

The swell of support for the Echo Park dwellers Wednesday arrived as the city and county continued to grapple with the enduring homelessness crisis, rendered even more complex by the year-old coronavirus outbreak.

Prior to the pandemic, more than 40,000 people were estimated to be homeless on a given night, despite ever-growing efforts to shelter and house people. As tents and encampments have increased, complaints from some residents have stoked demands for enforcement actions aimed at clearing them away or limiting them to certain areas.

Just before 8 a.m. on Wednesday, more than 150 people marched from Echo Park Lake to O’Farrell’s office to protest the planned closure. The marchers, chanting “housing is a human right,” filled a stretch of Sunset Boulevard. There were no reports of any disturbances or arrests.

The marchers carried signs bearing slogans such as “Unhoused and Loved,” “Services Not Sweeps” and “Housing not Sweeps.” One tent was painted with the phrase “We Refuse to be Swept into Dark Corners.”

“I can empathize with people who are unhoused,” said marcher Andrea Urmanita. “As a renter, she says she can “understand how fragile the line is between being unhoused and being evicted.”

The rally came a day after activist groups sparked a letter-writing campaign that generated more than 400 emails to O’Farrell’s office.

O’Farrell’s communications director, Tony Arranaga, said the city is closing the park to repair more than $600,000 in damage. A document from the Parks and Recreation Department called the work “park improvements.”

When pressed by a reporter during a news conference on an unrelated matter, O’Farrell said the park “will close soon, notices will go up, and then we’ll all know.”

Rumors floated that the closure and sweep would take place on Wednesday, spurring encampment residents to invite supporters to join them overnight Wednesday into Thursday, in case city crews came at night

O’Farrell said that 120 people have moved from the Echo park Lake encampment to temporary housing, such as at Project Roomkey and Project Homekey sites.

In his statement Wednesday morning, O’Farrell said his office has been working with the L.A. Homeless Services Authority to provide “a pathway to live life off the streets,” and that they have been at this for months, “taking much time, sensitivity and care.”

He urged those who “share our goal of providing housing, supportive case services, and medical care to Los Angeles’ most vulnerable residents” not to gather at Echo Park Lake and to support “this ongoing work to help people get housed without interruption.”

Los Angeles Mayor Eric Garcetti said Wednesday that he’s “been very, very impressed” by the number of park residents who have been placed into housing.

Garcetti claimed that though there are 120 tents left in the park, only 19 people were still living there as of last weekend, and that there is a safe hotel room available for every single person in the park.

“We’re asking all the folks — (the Los Angeles Homeless Services Authority), Urban Alchemy, some of the other great nonprofits and volunteer groups — to continue helping to make sure 100% of people know there is a placement,” he said, adding that there is a small percent of people who decline placements.

But  the encampment’s residents say they have created a model for a “shelter” that rivals what public officials and service providers have so far offered.

“We’re not shelter-resistant,” said David Busch-Lilly. “We’ve created a shelter here … We’ve created a model here that meets the needs that have not been met yet.”

A news release from the “Echo Park Tent Community” this week stated that the park’s unhoused residents have set up kitchens, showers, a community garden and trash clean-up, and created “a sense of security, safety, and stability, and healing for drug addiction and mental illness with our own pioneering forms of therapy in the absence of any help from the city government.”

They also pushed back Wednesday on characterizations that “we are criminals, that we’re drug addicts, that we’re horrible people.” Ayman Ahmed, one of the encampment residents who spoke, led a chant saying, “We are not criminals!”

Encampment resident Dreamer told the City Council in his public comment that their situation should be treated as a “humanitarian crisis,” and not as if they are “just people breaking the law.”

“I applaud the efforts of (LAHSA) to place folks into (Project Roomkey) sites, but as we all know, eligibility for the program is limited,” said Sachin Medhekar, organizing committee member for the SELAH Neighborhood Homeless Coalition. “I’m urging you to not displace the over 100 folks that reside at the lake, especially during this ongoing pandemic and to instead focus on connecting folks with a variety of services and housing options they deserve.”