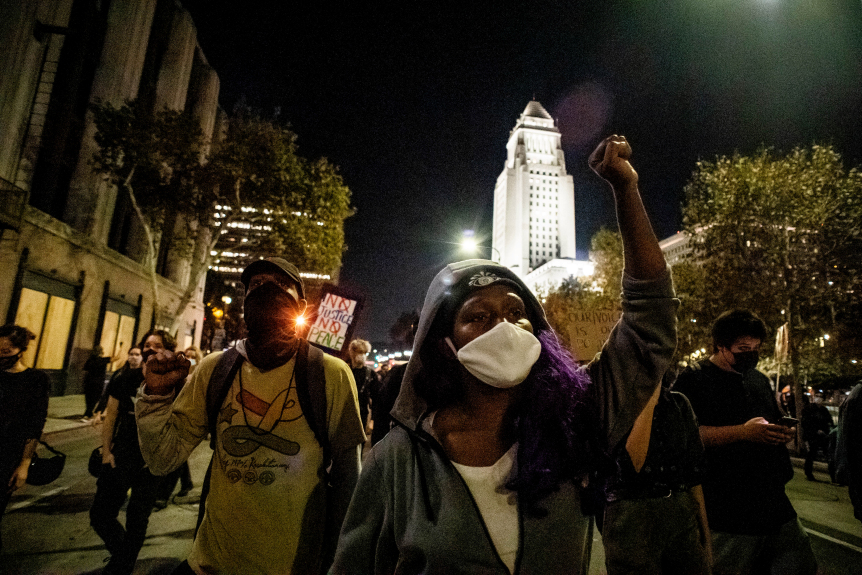 A smattering of peaceful election-related rallies were held across Los Angeles County on Wednesday, Nov. 4, as the result of the presidential election the day prior remained unclear.

The protests marked a shift from the night before, when Los Angeles Police Department officers arrested about 40 people and cited about 30 others protesting near Staples Center and at downtown intersections after declaring several unlawful assemblies in the area.

In Long Beach on Wednesday afternoon, about 70 people gathered in front of City Hall for a protest that was organized by left-leaning local organizations, including DSA Long Beach, Long Beach Forward, Black Lives Matter Long Beach and the Long Beach Immigrants Rights Coalition.

As results continued to trickle in for the presidential contest between President Donald Trump and former Vice President Joe Biden, with no clear winner, much of the protest focused on the work that must be carried out at the local level.

“Regardless of who wins the (ultimate) office of U.S. politics, we still have work to do,” Audrena Redmond, an organizer with Black Lives Matter Long Beach, said. “Regardless of won last night in any city elected position or national position, we have to be there to hold them true to our progressive principals.”

“This isn’t about the election,” Ochoa said. “This is about the power we can build together. This is about organizing, about being intentional with what we want to see in this world.”

About 30 people stood at the corner of Fifth and Hill streets shortly after 4 p.m. Wednesday, preparing to March through downtown.

Michelle Xai, an organizer with Refuse Fascism, which called for the protest, said the group had one demand — and that was to remove the president from office.

“Our strategy is mass sustained nonviolent protests in the street,” Xai, 28, said.

Xai said the march was meant to reach out to people who might be feeling confused, anger or saddened.

“We want to let them know we don’t have to feel defeated in this moment,” she said, “and we have a chance to change the way this is going.”

There didn’t appear to be any rallies supporting the president in L.A. County Wednesday.

In Long Beach, protesters said the rally was just a hint of what’s to come. The organizers of the protest invited residents to join them again at city hall Saturday, Nov. 7, when other events are expected to be held nationwide.