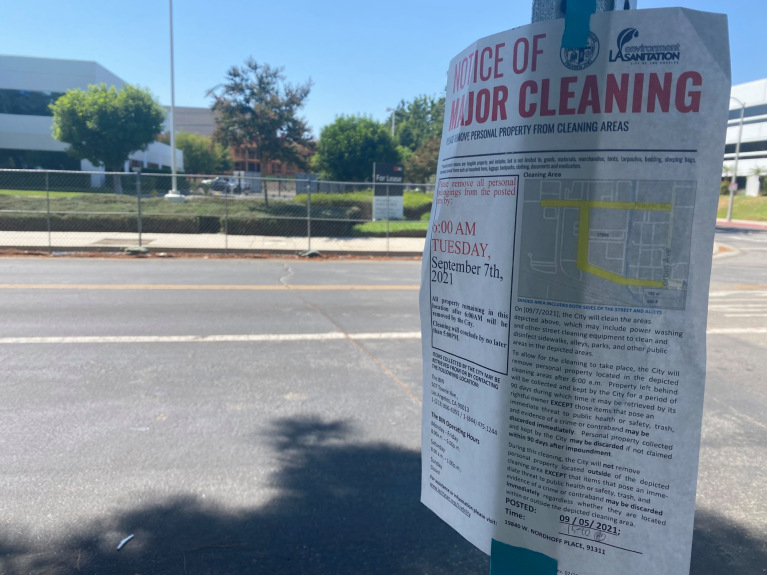 The notices were posted at several homeless encampments over the Labor Day weekend, just as many Angelenos were trying to get some relief from a heat wave.

Taped to utility and light poles, and in one instance a fence half-hidden behind a bush, the signs were meant to notify unhoused Angelenos that major encampment sweeps were resuming, after a more than a year-long pause that was initiated to adhere to public health guidelines aimed at preventing the spread COVID-19.

The notices posted over the holiday weekend said that those living in encampments on sidewalks in particular areas should expect sanitation crews to begin removing any property starting as early as 6 a.m., on Tuesday, Sept. 7. In all, sanitation crews were scheduled to do “major cleanups” at as many as 28 sites throughout Los Angeles in a single day.

For many who are unhoused, this marks a drastic shift from the city’s policy of adhering to Centers for Disease Control and Prevention recommendations that people not be forced out of encampments and be allowed to stay in place during the pandemic.

Earlier in the pandemic, sanitation crews had been instructed to clean around tents, rather than order people to leave the area entirely while the cleanup happens, at most encampment sites.

But that restraint went away Tuesday, as major cleanups that required people to remove themselves and their belongings from a specified clean-up area, resumed throughout the city for the first time in more than a year.

On June 30 of this year, the council voted to resume the cleanups, which require the homeless to remove their tents and belongings while sanitation workers sweep, power wash and remove trash and hazardous materials from the area, according to LA Sanitation and Environment, which added that unattended belongings are “bagged, tagged and stored.”

Los Angeles has since seen a resurgence in COVID-19 cases in recent weeks, particularly among the unhoused community.

The resumption of the major clean-ups expands enforcement of Los Angeles Municipal Code 56.11, a city ordinance that was restricted at the start at the pandemic. It is separate from Los Angeles Municipal Code 41.18, another law that affects people living in homeless encampments, that officially went into effect last Friday and that could also be used as a tool to clear encampments.

Questions submitted to the Department of Public Health and the Los Angeles Homeless Services Authority about the multiple cleanups, and their public health effect amid the pandemic, on Tuesday went unanswered, or were redirected to other departments already contacted by the Los Angeles Daily News, as of Tuesday evening. A spokesperson for the city sanitation department explained that the scheduled cleanups came at the “direction” of the Los Angeles City Council.

Meanwhile, several unhoused Angelenos affected by the scheduled operations Tuesday described the return of the cleanups as stressful events that make their already difficult situation worse. Some said they were given confusing information about when they were expected to leave the area, while others said they had little time to prepare and lost most of their belongings to sanitation crews.

At some locations, the crews never even showed up.

On Tuesday afternoon, 51-year-old Terry L. Ferguson, had spent a long day waiting to see if sanitation crews were really planning to come to his street to order him to move out, while trying to go about his day as normal. He lives in a tent along Nordhoff Street, around the bend from the local Councilman John Lee’s office.

Because of the notice, many people’s day came to a standstill, so when crews skipped their encampment, it was doubly frustrating, he said.

“We have to eat during the day, we have to make appointments to get housing,” said Ferguson, who earlier that day was spraying down the pavement near his tent with a hose — something that he and other residents of the encampment did on a regular basis, usually on the weekends, in a bid to keep their spaces sanitary.

“I feel like they’re playing games,” Ferguson said of the city, adding that in recent days, he has also heard that there may be a need for them to move due to a plan by the city to do tree-trimming.

As Ferguson spoke to a Los Angeles Daily News reporter, his voice faded and he struggled to focus on the interview, prompting him to apologize. He explained that “this heat is killing me.”

Meanwhile, others had rented a truck and were ready to move their belongings into on Tuesday. But the crew never showed, though police officers came by later to tell them that they should not have been expecting crews to show up, according to an advocate who spoke to Ferguson later in the day.

“We were like pins and needles today, wondering when they were going to show up, how much we were going to lose of our stuff, because we just didn’t have enough time,” said Karen Lucius, 55.

She added that even with some advance notice, this weekend was a tough one because of the heat. “It’s been too hot to really do some heavy-duty packing,” she said.

Mike Finch, a neighbor of Ferguson’s, spent the morning bagging up trash and moving them across the street. It was his birthday, he said, but there was no time to celebrate the occasion.

He said that he holds out hope that sanitation trash trucks will pick up the trash that he and others set aside, in an effort to keep away pests from their living area. If all else fails, and the trash does end up piling up for too long, he and others try to work out ways of moving the waste out of the area.

He expressed frustration at what happened Tuesday, saying he feels like public officials often fail them by “not telling us the full truth.”

“It’s like a roll of the dice with them,” he said. “If they’re going to say it’s a certain date, keep it on that certain date. Don’t surprise us a week or two later … it’s a word of honor.”

While Ferguson, Finch and others waited for the crews to show up, those living at two other encampments nearby were undergoing major clean-ups.

At one site, along Jordan Avenue, in Chatsworth, residents were told they had 15 minutes to pack up and leave the area. Sanitation crews ultimately provided more time, but at least two people gave up on their tents and belongings, leaving them for the city to throw into the trash truck.

A miniature Christmas tree, a cupboard, a filing cabinet and other items could be seen getting tossed Tuesday into the sanitation department’s trash compactor.

One observer, Victor Cocolotta, noted that the truck seemed to be getting full, which means the crew might soon be done for the day and will finally leave them all alone.

“I think they’re just wasting people’s time,” he said. He chuckled bitterly when asked about the power-washing that was promised in the notices that were posted, saying, “it’s bull.”

Cocolotta said he worked to get all his things packed into his trailer that’s parked on the street — a safe spot that the sanitation crew would not be able to reach. All that the cleanup did was delay everyone’s day, he said.

Among the notices posted along some of the streets in the area, sanitation crews could be expected to disinfect streets and do power-washing. However, the crew that circulated the route for the northwest San Fernando Valley area included a trash compactor truck, but no cleaning trucks.

Meanwhile, notices were nowhere in sight in Granada Hills, along a street near a strip mall and supermarket. According to several people who were living along a sidewalk none had been put up.

Elena Stern, a spokesperson for the sanitation department, said she does not have a photo of the posting, “but it was posted as part of our regular practices.”

At this location, people said the sanitation crew showed up at around 7 a.m. accompanied by not only Los Angeles Homeless Services Authority outreach workers, but also Los Angeles Police Department officers. Most of their things were taken, said Vicente and Kathleen Scargglioni.

Kathleen, who uses a wheelchair, said that they did hear about a possible cleanup in recent weeks, but ultimately “there was only so much time to pack up your stuff.”

“It’s like the SWAT team moving in,” she said.

Prior to Tuesday, sanitation efforts have primarily been initiated by encampment residents, the 58-year-old Vicente added.

“We got cleanups on a weekly basis,” he said. “We got two or three guys in charge, voluntarily — we sweep, put some water, soap solution.”

He said he was “disillusioned” by what happened during the clean-up Tuesday.

“We were expecting help,” he said, adding that he and Kathleen check with service providers every day. They had come to the area, where they have some friends, to see if they could get a spot in Project Roomkey, a program aimed at sheltering unhoused Angelenos who are most vulnerable to COVID-19. But they were not among the “lucky ones” who got a room or other kinds of housing assistance.

He said they want to respect the people who live in the neighborhood, who he describes as middle-class — people who were able to keep their jobs and are in a good financial situation. They ended up on the sidewalk, near the supermarket in Granada Hills, because their car happened to break down there.

“Especially with COVID-19, most of us lost our jobs and our place — we were evicted even with the prohibition (on eviction),” he said.