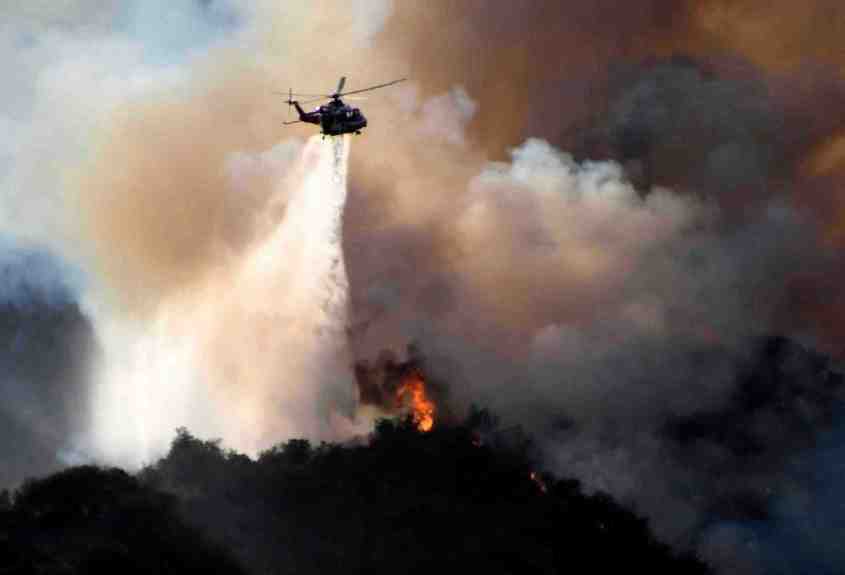 About 1,000 people remained under mandatory evacuation and hundreds more were told to prepare to leave on Sunday afternoon as firefighters for a third day battled the Palisades fire, which by late afternoon had spread to 1,325 acres with zero containment.

Helicopters continued to conduct water-dropping operations while firefighters worked on the ground in steep, difficult terrain.

No injuries or damage to homes were reported.

The fire — called suspicious in nature — burned in dry vegetation that hadn’t burned in 50 years, the Los Angeles Fire Department said, adding crews were in place for structure defense if necessary.

However, by late Saturday afternoon, onshore winds, gusting from 15 to 25 mph ignited a flare-up, pushing the fire forward, growing to 100 acres around 5 p.m. and then 750 acres with no containment two hours later.

The fire burned along very steep slopes of the Santa Monica Mountains, and in an area with no clear fire roads, making access for fire ground crews difficult and dangerous, Los Angeles city fire said. Officials have relied largely on fire helicopters and tankers to keep flames from spread.

“We can’t get our lines around it like like most brush fires,” said Margaret Stewart, a city fire spokesperson.

The fire department estimated 1,000 people were evacuated by Sunday morning. Those evacuations were ordered in two areas in the county of Los Angeles – Zone 4 and Zone 6.

Zone 4 is everyone east of Topanga Canyon Boulevard between the Community House and View Ridge Road, and Zone 6 is everyone north of Entrada, south of Oakwood Drive and east of the Henry Ridge Motorway.

A new evacuation warning was issued at 2 p.m. Sunday for all homes north of Chastain Parkway in the 1500 block to Calle Del Cielo. The warning area includes Calle De Sarah, Calle Bellevista and all homes west of Calle Del Cielo and Ave Ashley up to the hills.

Because of the fire, the Topanga Elementary Charter School campus will be closed beginning Monday because of air quality and safety concerns, Los Angeles Unified announced. Remote learning plans for students are in place.

“Members of the sheriff’s Special Enforcement Bureau were searching for a person Saturday suspected of setting a brush fire that has now scorched about 750 acres and was flaring up in Pacific Palisades,” Parra told NBC4.

The Los Angeles Fire Department on Sunday evening said arson investigators identified an individual who was detained and released, but “we now have a second individual that is being questioned.”

Topanga Canyon Boulevard was closed in both directions between Mulholland Drive and Pacific Coast Highway until further notice due to firefighting activity. The right lane of southbound PCH was also closed between Temescal Canyon Road and Chautauqua Boulevard.

Air quality officials issued a smoke advisory through at least Monday because large amounts of smoke were billowing near homes in the area. Those smelling smoke or seeing ash are advised to limit exposure by remaining indoors with windows and doors closed and avoiding vigorous physical activity.