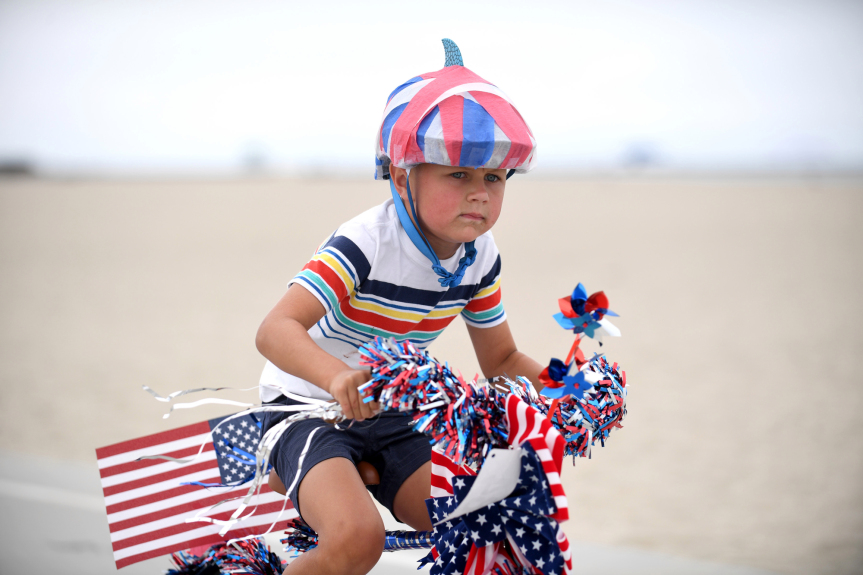 Los Angeles County residents flocked to locations all over the region to enjoy July 4 camaraderie with fellow Americans on Sunday, as restrictions brought on by the COVID-19 pandemic have eased in recent weeks.

The events were as diverse as the people themselves. And most celebrations would conclude Sunday evening with the traditional fireworks show.

Amid the revelry, officials warned that the coronavirus outbreak was far from over. After three straight days of new coronavirus cases topping 500 in Los Angeles County last week, public health officials reported 457 new cases of COVID-19 and four additional deaths on Sunday.

Officials, while not discouraging people from gathering, promoted caution and common-sense safeguards. “We are grateful to everyone for the tremendous progress we have made over the past year, yet we are not out of the woods just yet,” Public Health Director Barbara Ferrer said in a statement. “If you plan to gather with others this holiday, please take sensible precautions to avoid transmission of the virus, particularly if you are gathering with individuals and children not yet vaccinated. If you are unvaccinated, consider getting your vaccination now to increase your protection as other public health precautions have been lifted; talk to a friend or loved one who has been vaccinated and ask them about their experience. Vaccines provide us with the best tool for ending this pandemic that has plagued us for so many months.”

Officials also recommended wearing facemasks in large groups, especially indoors and especially when you don’t know the vaccination status of all those gathered.

On Sunday morning, myriad events officially made their comebacks, after nearly all were can cancelled during last summer’s COVID-19 spike.

Between 500 and 600 people rolled in to participate in the 17th annual Great American Kids’ Bike Parade in Long Beach. Families showed up with their bikes, scooters, tricycles and other modes of transportation all decked out in red, white and blue. The parade proceeded down the waling path set up on the beach, parallel to the water.

Justin Rudd, the longtime organizer of the event, said he was excited that people were able to say goodbye to COVID-19 with his Fourth of July event, said what he hoped the event meant for the community.

“It’s an opportunity for us to express our patriotism,” Rudd said. “Both the kids and their families.”

The City of Palos Verdes hosted a family-friendly concert in the park. Bounce houses galore sat alongside food trucks serving a Independence Day delicacies such as barbecue and burgers. Kids could ride horses or pet animals at the petting zoo. The Palos Verdes Symphonic Band played in the early afternoon and a Heart Tribute band was slated for later in the day.

Peninsula-area resident Brian Selzer enjoyed the event but said that, although many people were out, he didn’t think it felt like a normal Fourth of July.

“You still don’t know who is vaccinated and who isn’t,” Selzer said. “I think it’s perfectly fine to be out here, but my family and I are still being cautious.” Selzer and his family wore masks.

In Simi Valley, people gathered in a park to listen to live music, peruse  local vendors’ goods at a farmer’s market-like event and, eventually, watch a grand fireworks show. During the day, children played on a large playground, moving at super speeds down the slide and climbing ladders with their friends.

Rod Cordova, a member of local band Bad Habit, said he was happy to see people out in person because the group hadn’t played many live shows since the pandemic hit.

“We take in their energy and feed off that,” Cordova said. “It’s going to be great to have people up by the stage, dancing and singing along.”

Cordova also encouraged people to go to local venues which pay to have artists perform them because those businesses had suffered through the pandemic as well.