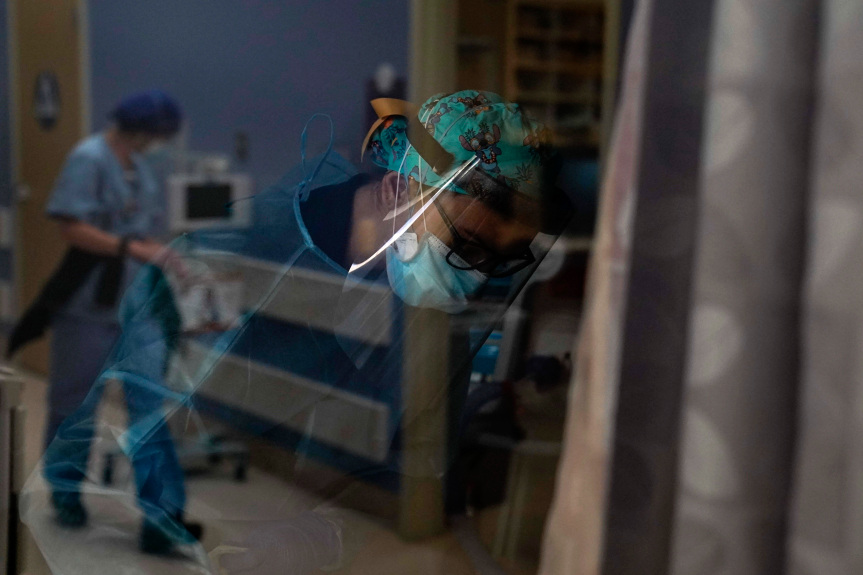 As state officials closed in on 30,000 coronavirus deaths, Los Angeles County’s daily report slid below 200 fatalities for the first time in six days on Sunday, Jan. 10, as public officials hoped for a break in the as-yet uncontrolled post-holiday COVID-19 surge.

Meanwhile, the county’s Department of Health Services announced Sunday that it will discontinue the use of COVID-19 PCR tests made by San Dimas-based Curative at pop-up testing sites. The U.S. Food and Drug Administration warned patients and healthcare providers a week ago about the potential risks of false negative results, specifically with Curative’s test.

Meanwhile, state officials posted 468 deaths on Sunday, a day after setting a record one-day total of 695, according to the Department of Public Health. California’s death toll since the start of the pandemic rose to 29,701. L.A. County is home to a fourth of California’s population, but it accounts for about 40% of the state’s COVID-19 deaths.

The number of county residents hospitalized with the coronavirus showed signs that it may be plateauing. The total — posted on the state health department’s website, which updates a day earlier than the county — slipped just a bit, to 7,910, on Sunday. That was a decrease of 54 patients from Saturday’s total, and a drop of 164 patients from Thursday. Though the decreases were relatively small, they provided a wisp of relief from weeks of record increases, which have left overtaxed hospital staffs near the breaking point.

County Health Services Director Dr. Christina Ghaly said last week that the numbers of new daily hospital admissions had begun to level off — but still at a high level, and patient discharges have not kept pace, leading to the growing hospital population. But she and other health officials warned that the admissions are anticipated to surge upward again as a result of increased gatherings during the winter holidays.

“The scale of the tragedy associated with this pandemic is unfathomable,” Dr. Paul Simon, Public Health Department’s chief science officer told reporters last week. “The very high numbers … didn’t happen by accident. They’re a direct result of the many people who are not following the necessary precautions over the winter holiday — not wearing face coverings, not limiting contact with those outside their households, not physically distancing when outside the home and not refraining from traveling.”

Figures released late last week showed a new daily caseload of nearly 20,000 — significantly above the average of about 14,000 new cases a day over the previous week. Experts will keep a close watch on the figure this week, hoping to see it inch downward.

Of the total hospitalizations, 1,712 were in intensive care. Statewide, hospitalizations have risen to nearly 22,000, and state models project that number could reach 30,000 by Feb 1.

According to the state’s front-and-center metric index, the 11-county Southern California Region continues to be at 0% ICU availability — though that doesn’t necessarily mean that all intensive-care beds are all filled. The state Department of Public Health’s indicator, “current ICU capacity by region,” takes the actual percentage of remaining adult ICU beds each day and tweaks it to reflect the lopsided share of COVID-19 patients in intensive care compared to others who also need those beds for life-saving treatment and equipment, such as ventilators.

The county’s 70 “911-receiving” hospitals with emergency rooms have a total licensed capacity of about 2,500 ICU beds. Last week, the county averaged 31 available adult ICU beds on a daily basis, with 78% of all ICU patients in the county being treated for COVID-19.

Nearly five million L.A. County residents have been tested for COVID-19 since the pandemic began, with 17% testing positive, the department said.

The county’s daily update did not include the latest figures from the cities of Pasadena and Long Beach, which operate their own health departments. Pasadena’s death toll rose by two on Sunday, to 175, while 147 new coronavirus cases increased the city’s total to 8,397 since the pandemic began.  Long Beach did not update its statistics over the weekend. The city reported seven more coronavirus-related deaths on Thursday, bringing the city’s death toll to 447, and 597 new cases, for a total of 37,293.

Responding to concerns raised by the FDA, county Department of Health Services announced that tests made by Curative will be replaced with Fulgent Genetics tests this week.

“We are confident in our data and we are working with the FDA closely on the matter,” Curative CEO Fred Turner said last week. “Testing sensitivity and accuracy on behalf of our patients is at the heart of our work.”

All COVID-19 tests have a risk of false negative results, DHS officials said. That means a person may test negative despite having the disease because the results are sensitive to how well the sample was collected and the concentration of viral RNA in it.

While no specific problems with the company’s test were identified, the FDA did say the test must be performed in accordance with its labeling and should only be used in symptomatic people within 14 days of symptoms developing. Additionally, the FDA asked that people taking the self-administered test, be observed by a healthcare worker.

“When the test is not performed in accordance with its authorization or as described in the authorized labeling, there is a greater risk that the results of the test may not be accurate,” the FDA said in a safety alert Monday, Jan. 4.

There is no reliable way to detect early infection, meaning that infection often spreads before symptoms have time to develop, DHS’ experts said. Nevertheless, PCR tests — including the Curative test — remain better at detecting disease than some other tests, including rapid tests, they added.

DHS reminded people to follow public health guidance to protect themselves and others by staying home whenever possible, wearing a face covering over the nose and mouth, avoiding gatherings and frequent hand washing.

Those who set up an appointment arrive and self-administer the test by swabbing inside their mouths. Directions are given by on-site staff.

Riverside County also has contracts with Curative to perform testing at various sites.

Self-administered tests are more prone to false negative results compared to tests administered by a health professional, regardless of the vendor, Riverside County Public Health Officer Dr. Cameron Kaiser said last week. A person can be negative one day and positive the next, even with a nasal swab test, he said.

“This is because sometimes people don’t follow the instructions precisely, even though they intend to do so,” a statement from Kaiser says. “If there isn’t enough of viral material in the sample for any reason, it won’t be positive. Staff members are available to explain the process to ensure residents perform the self-administered test correctly.”