Of the San Fernando Valley’s 52 homicides in 2019, only Michael Kelly’s remains unsolved 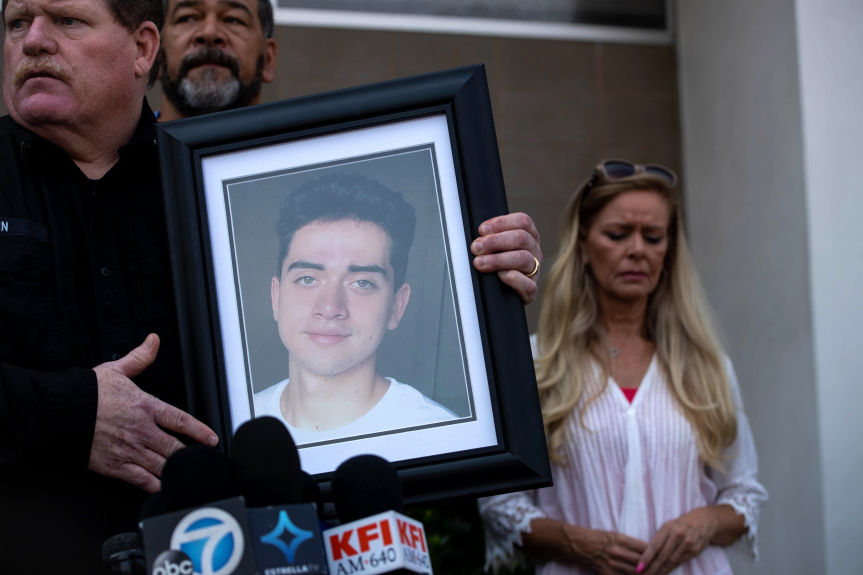 On Feb. 19, 2019, a dark-colored sedan cruises north on Van Nuys Boulevard, where it cuts through row after row of squat, suburban homes in the San Fernando Valley’s northeastern corner.

This is dense and historic Pacoima, one of the oldest neighborhoods in Los Angeles, with a deeply rooted Hispanic culture.

The driver of the sedan, shrouded inside, drifts toward Glenoaks Boulevard. Up ahead, two young men walk across Van Nuys.

It’s 8 p.m. on a Friday, cold and rainy. But there are still plenty of people inside the stores of the VanGlen Center, an aging strip mall on the corner. Some are eating at a mariscos restaurant, others shopping at a T-Mobile store. A tax-preparing business is still busy.

The car is in the leftmost lane but suddenly swoops all the way to the right so that it’s hugging the curb. The driver makes a right onto Glenoaks. The two men are now on the sidewalk, a few feet from the car.

The passenger-side window rolls down, and a .40-caliber handgun is pointed at them.

And immediately the man with the gun squeezes the trigger five times.

Kelly dives over the center’s low, concrete wall. That is about when he is struck. His friend runs. Bullets rip through the air. One hits a nail salon, another the seafood restaurant. Customers flee.

The sedan peels away. Kelly is bleeding, a gunshot wound in his side. His friend, hit in the right leg, lopes away; they were only headed to his home.

Paramedics arrive in minutes, but Kelly dies in the parking lot.

No witness has seen the car since. Or at least no one has told police they’ve seen it. No one seems to know who killed Michael Kelly.

The entire shooting lasted just seconds, and it all happened right beneath a surveillance camera the Los Angeles Police Department installed on top of a 50-foot-tall pole that holds the traffic signal on the intersection’s southeast corner.

And yet there is no footage of this shooting – everything happened near the base of the pole, squarely in the camera’s blind spot.

There’s footage of Kelly and his friend getting off of a bus at the Van Nuys/Glenoaks stop, then walking across the street. The sedan can be seen approaching the intersection, and footage shows it fleeing.

Rains that night left the area misty. No one, including FBI agents, has been able to get a license-plate number for the car.

Plenty of people saw the killing and its aftermath. At least one person tended to Kelly before paramedics arrived.

“There were definitely people there,” said Detective Eloy Navarro, who works for the Homicide Bureau in LAPD’s Valley Division. “A witness was actually parked in the parking lot facing Van Nuys, right on the corner there – she saw Michael Kelly jump over the wall. He jumped right in front of her car.

“She saw the muzzle flash,” Navarro said. “She sees a black car, then she ducks down. She’s freaking out.”

In 2019, across the entire division – LAPD’s largest by geographic area – 52 people were victims of homicide. Besides the Kelly case, the Valley detectives say, all of the rest have been solved.

Valley detectives even solved a few from the year prior, sending their clearance rate – the number police use to track how many crimes they’re getting off of their desks – to above 100% for 2019.

(This year, so far, has been a tougher one for the detectives, whose solve rate is about 50 percent on 45 homicides.)

Detectives attribute their success in part to the residents here who, compared to other parts of the city where gang violence is a more intractable problem, tend to provide information more freely.

To help with the Kelly case, LAPD has offered a $50,000 reward for information leading to an arrest and a conviction.

Lt. Jim Gavin, at an August press conference to drum up witnesses concerning the murder of Kelly and two others, insisted Kelly was not a member of a gang. Detectives still don’t know if his killing was a case of mistaken identity. The friend he was walking with was a member of a gang, Detective Navarro said.

“I don’t know,” Navarro said. “Did they recognize his friend from somewhere else? That’s one of the big questions.”

Navarro said he thinks it’s likely the suspects recognized Kelly’s friend as they crossed the street. Kelly was wearing a San Francisco 49ers hat – one of Pacoima’s local gangs uses the 49ers symbol as its own.

Another unlucky break in the case is that detectives have been unable to match the bullets fired to another known gun. Navarro said data obtained from forensic tests of the bullet fragments was uploaded to a national database that tracks guns used in crimes. There was no match.

Kelly was adopted when he was just an infant, his last name, initially Gamboa, switching to the family name. His adoptive parents homeschooled him for most of his life, but for his final year he enrolled in a public magnet school.

“There, he met friends that he never met before,” Navarro said. “And they were friends that were part of the wrong crowd.”

‘Things we didn’t want them exposed to’

Randall and Ronnell Kelly are sitting in the shade of a patio in the middle of their sprawling property. The weather in the Valley has been sweltering for weeks. But a light breeze brings cool air.

They’re just miles from where they grew up, in Pacoima in what’s now called San Fernando Gardens, the Valley’s only public-housing project, which sits next to a park.

Both of their families eventually moved out and bought homes in the neighborhoods immediately surrounding the projects before moving to Lake View Terrace in the ’70s.

Largely, both have lived in the northeast Valley their entire lives. Both grew up in large families. Randall has 13 siblings.

Their mothers knew each other, and their siblings were frequent guests at each other’s houses. The couple married in 1989.

The Kellys have two other children, both adults. Foster care was not immediately something they were interested in. But as soon as they began researching the system and contacting foster agencies, they started getting calls.

“For some reason, they offered kids to us right away,” Randall Kelly said.

The couple ended up fostering Michael and his birth sister. They adopted Michael when he was just a year old. The birth sister was adopted by another family at the couple’s church. The two siblings remained close.

Michael and the sister have six other siblings, all who also went through the L.A. County foster system, who they also stayed in contact with.

From an early age, Michael was an athlete.

“He was a sports kid,” Ronnell Kelly said. “He was good at any and every sport. Baseball, basketball, golf, flag football, football. He could swing a golf club at 2 – that was pretty impressive.”

“He was awesome at volleyball,” Randall Kelly.

Michael loved to fish, and he loved to cook.

“He could make a mean smoothie,” Randall said with a chuckle. “He would just make stuff up.”

The Kellys started homeschooling their kids around the time they adopted Michael.

“I know what high school was like, and it was only getting worse as time went along,” Randall Kelly said. “You can get exposed to a lot of things we didn’t want them exposed to.”

Michael was homeschooled every year until the 12th grade, when he attended Sylmar Biotech Health Academy. Upon graduating, he and his birth sister agreed to enlist in the U.S. Marine Corps. He was sent to Camp Pendleton for boot camp.

After about six weeks, however, an ulcer Michael developed as a child flared up, and he was medically discharged.

That crushed him, his parents said.

The sudden exit left him with little direction. He tried half a dozen odd jobs – he worked part time at golf courses and at a small real estate business, and at one point delivered meat for a company in downtown L.A. He eventually landed an apprenticeship with a plumber.

And he was considering taking college courses so he could reenlist in the Marines, this time as an officer.

The Kellys were in Paris on vacation the night of the shooting. They got a call from Michael’s girlfriend telling them what happened.

“It was Saturday morning our time,” Randall Kelly said. “She told us, ‘Mike’s been shot. Mike’s dead.’”

The couple made arrangements from their hotel room.

“We stayed there,” Randall Kelly said. “We planned a funeral from half a world away.”

There is still much that the detectives assigned to Michael Kelly’s case don’t know.

They don’t know what kind of car the suspects were driving. All they know is that the vehicle was a black or dark-colored sedan. After the shooting, the car continued on Glenoaks and disappeared into the darkness.

“It wasn’t a red Camaro or anything,” Navarro said. “It would be good to identify the car. Even further, we have to identify who pulled the trigger. Getting the car would be a clue to getting to that person.”

They don’t know for sure how many people were inside the car, but evidence seems to point to two: the driver and one passenger who fired the gun.

All five bullet casings were found in the street after the shooting, indicating that the passenger leaned out of the car’s right window, extended the gun out and fired all of the shots that way.

The bullet that hit Michael struck his side, then travelled through his chest and punctured one of his lungs. He died in the parking lot.

Navarro and other detectives interviewed Kelly’s friend in the hospital. They brought in an artist to draw a sketch of the gunman. But the only description the friend gave was that the suspect was a Hispanic man.

‘Waiting for a conclusion’

The Kellys said they do not expect a break in the case any time soon. But they hope someone comes forward to identify who killed their son.

Michael’s funeral was at their Baptist church.

Randall Kelly has worked for the city’s Recreation and Parks Department for more than three decades, and served on a neighborhood council for a few years. He has many ties in the community, especially to the youth who make use of the city’s parks.

In the meantime, Ronnell Kelly said, she has forgiven the person who did this to her son. She still wants the gunman to be caught: “We don’t want anyone else to die senselessly.”

She said the couple’s faith is helping the family heal.

“We believe Mike is in heaven,” Ronnell Kelly said. “We believe that.”

LAPD asks that if you have information on the case to call the Valley Homicide Bureau at 818-374-9550.