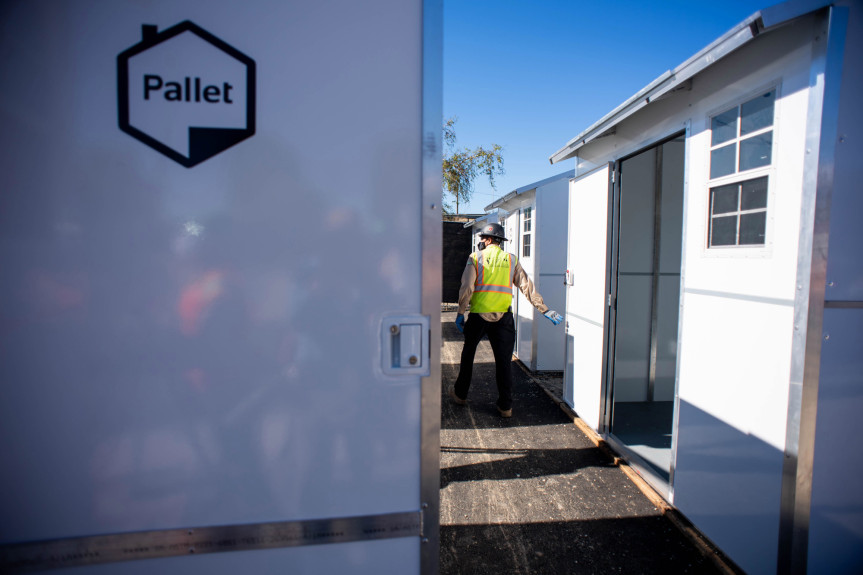 A new “tiny homes” community at North Hollywood’s Alexandria Park — much like one that opened nearby two months earlier, only bigger — is getting ready to open its doors to people experiencing homelessness next week.

The site, which cost $44,000 per bed or $8.6 million total, is on city parks property along the Hollywood Freeway and is Los Angeles’ largest such development so far. It will include more than 103 sheds provided by the company Pallet Shelters, and a total of 200 beds.

Ken Craft, the president of the nonprofit operating the site, Hope of the Valley, said that they will start moving people in starting Monday. The tiny homes community is the second to open in the city — offering three meals a day meals to residents as well as air conditioning/heating and a power supply in each structure — both in Councilman Paul Krekorian’s district.

The first, at Chandler Park, has 39 units and cost $5.4 million, which was spent mostly on electrical and sewage work, according to Krekorian’s office. That one has filled to capacity and now has a waiting list, according to the operator. Walking touts of the site are available. People can sign up at https://bit.ly/32GFNWE.

On Thursday, dignitaries — including Krekorian and Mayor Eric Garcetti, Los Angeles Homeless Services Commissioner Wendy Greuel and actor Tim Allen — staged what would typically have been a sedate ribbon-cutting ceremony to mark the opening. But the event took a turn when activists arrived to protest enforcement actions against people living in encampments around the future North Hollywood site. The activists stood amid the public officials as they gathered in front of a gaggle of notebook and camera-carrying journalists.

One man, Eugene Pesikov of Valley Village, stood in front of a pair of large scissors held by Krekorian. “You shouldn’t be proud of this,” Pesikov had told the councilman, who responded, “Well, I am.”

Another activist, Carla Orendorff, knelt in the line-up of picture takers, holding up a sign that read “Being houseless is not a crime. Stop the Sweeps,” and “House keys not handcuffs.”

Activists also protested outside The Willows, a congregate shelter, on its opening day in Canoga Park. A special enforcement zone was set up around that shelter that would allow for rules restricting the presence of encampments in the area.

On Thursday, activists argued that an enforcement action, or a sweep, taking place Tuesday in the city park, freeway embankment and parking lot areas near the Valley 6 Theater, had displaced people who were on the list to get into the Alexandria Park tiny homes site just adjacent to them.

In the last week, many RVs, vehicles and tents that were in that area have left, and only a line of makeshift sheds remained on Caltrans property, where the state agency has refrained from displacing and moving people.

City leaders say their operations at encampments are not “sweeps,” but rather efforts to provide services such as trash pick-up and cleaning. During the news conference, Krekorian said that during the “coordinated” operation, the people at the encampment were allowed to return after the cleaning.

Activists have tussled with city officials about what role sanitation department-led operations really fulfill, arguing that if they were meant to only provide services that unhoused residents want, there would be no need to involve police. The activists have called on the city to provide more comprehensive and consistent services to the city’s unhoused, similar to what is being provided to people who are housed.

City officials have said in recent weeks that they still have a ways to go toward providing more consistent sanitation services, but insist the clean-ups are to provide trash pick-up, cleaning and shower services and do not displace people.