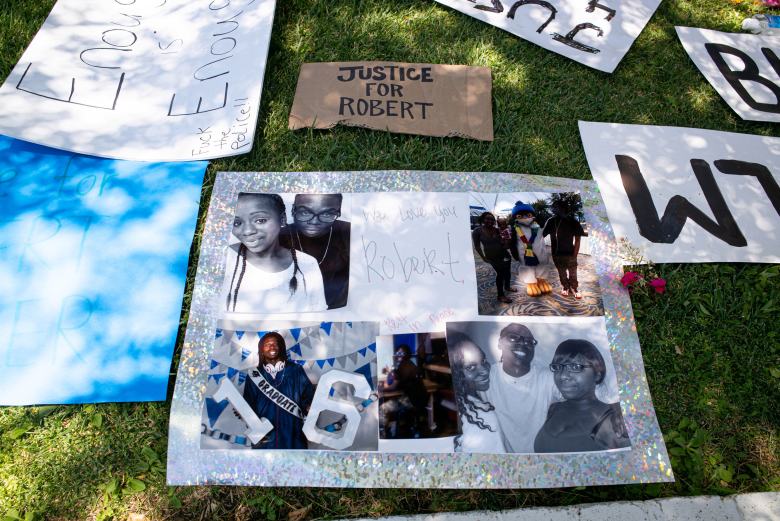 The Los Angeles County coroner said a “lack of any evidence” of foul play led officials to initially describe the death of Robert Fuller, a black man found hanging from a tree in Palmdale last week, as a suicide.

An autopsy was performed Friday, two days after Fuller, 24, was found dead in the early morning near Poncitlán Square, just east of Palmdale City Hall.

Coroner’s investigators deferred determining a final cause of death before they get more information from witnesses and a toxicology report on Fuller’s body. A witness called 911 to report the body at 3:36 a.m. that morning.

Coroner Jonathan Lucas said the team of investigators called to the scene didn’t see anything that led them to believe Fuller’s death was murder.

“It was more the lack of any evidence there was any foul play,” Lucas said in a virtual press conference on Monday. “He was hanging, and there was no other information to suggest there was foul play at the time.”

The investigation into Fuller’s death is widening, however, after the man’s family, along with dozens of protesters who gathered in front of City Hall over the weekend, demanded more transparency from authorities.

The man’s family has said it didn’t seem plausible that Fuller killed himself.

On May 31, another black man was reported to have hung himself in Victorville. San Bernardino County authorities said foul play was not suspected in that death of 38-year-old Malcolm Harsch.

But protesters have speculated the deaths were related.

In Monday’s press conference, Los Angeles County Sheriff Alex Villanueva said there wasn’t any evidence the deaths were linked, but that his detectives would talk with San Bernardino County detectives.

In a statement later Monday, San Bernardino County sheriff’s homicide investigators said Harsch had been talking with his girlfriend at a homeless encampment at Circle and Victor drives. Not much later, he was discovered in the tree at 7:07 a.m.

His girlfriend returned to her tent, then later came out when others alerted her that Harsch was found hanging from a tree, a cord around his neck. Residents of the encampment tried to resuscitate Harsch before deputies arrived and also attempted to revive him.

San Bernardino County coroner’s investigators also have not officially determined Harsch’s cause of death. But they said there was no indication of foul play.

An autopsy was performed on Harsch’s body on June 12, and coroner’s offices are waiting for results of a toxicology report.

Still, the sheriff said detectives were likely to come to the same findings even as they look harder at how Fuller died.

“We’re being as transparent as we can be with this investigation,” Villanueva said. “The results, you’ll find out, they’re probably gonna coincide with the same conclusions, once it’s done.”

Villanueva said a caseworker with the L.A. County Department of Public Social Services was assigned to Fuller. The sheriff said he didn’t know why Fuller was receiving help from Social Services but detectives were going to ask.

A Social Services spokesman did not return a request for comment Monday.