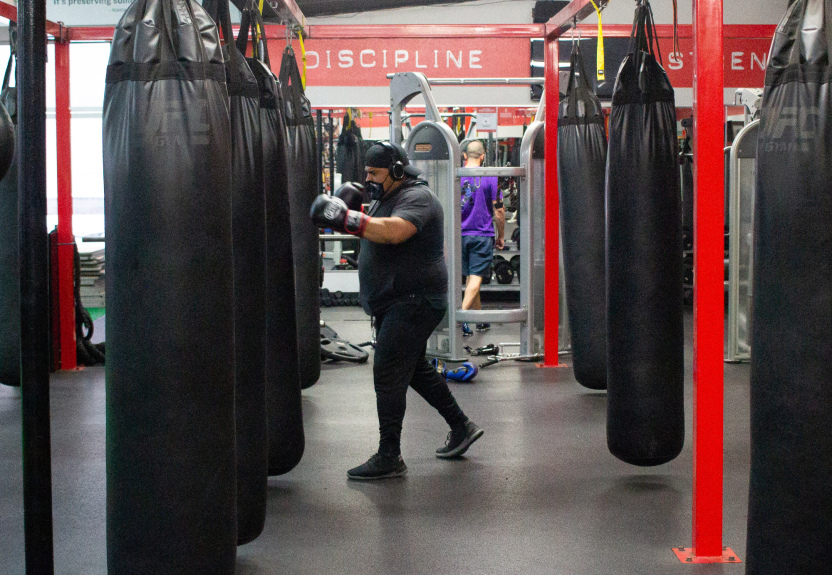 Today, Los Angeles County restaurants are welcoming diners indoors and movie theaters and fitness centers are opening anew, with customers widely spaced, when the county shifts to the less-restrictive red tier in the state’s “Blueprint for a Safer Economy.” County officials confirmed the move Friday, when the state attained the benchmark of administering 2 million doses of COVID-19 vaccine in high-risk communities across California, all rock particularly hard by the pandemic.

While restaurants, museums and theaters were allowed to resume indoor operations at 25% capacity, gyms, yoga studios and other fitness centers max out at 10% capacity indoors.

“With the new guidelines and our max occupancy we’ll be able to have about 15 people indoors,” said Raul Anaya, owner of UFC Gym Long Beach.

But because of the early morning rain, Anaya said moving the equipment outside was not a possibility. And because the facility’s group courses range from about 15-30 members, exceeding the 10 percent occupancy limit, the gym had to cancel its morning classes.

“For now we’re just going to use the indoors for private training,” Anaya said.

Around the region, restaurant owners were anxious, unsure if their customers were eager to dine inside anew.

“It was a sad year,” said Armando Ramirez, owner of Pasadena’s El Portal restaurant. “It’s looking better now, but looking back on the year, it was just really hard.”

Under red tier guidelines announced by Los Angeles County last Thursday, indoor dining can resume at 25% of capacity. The county will require restaurants to have 8 feet of distance between all tables, which will be restricted to a maximum of six people from the same household. The rules also call for ventilation to be increased “to the maximum extent possible.”

Rules for other businesses that will take effect at 12:01 a.m. Monday largely align with state guidance for the red tier:

Moving to the red tier will also allow the reopening of theme parks as early as April 1 — including Disneyland in Orange County and Universal Studios Hollywood in Los Angeles County — at 15% of capacity, with in-state visitors only.

The rules also permit resumption of activities at institutes of higher education, and reopening of in-person instruction for students in grades 7-12. Private indoor gatherings are also permitted for people from up to three different households, with masking and physical distancing. People who are vaccinated can gather in small groups indoors without masking or distancing.

“This is welcome news, especially as many of our small businesses have borne the brunt of the financial fallout from this pandemic, and as our students struggle to keep up with distance learning,” county Board of Supervisors Chair Hilda Solis said. “We have achieved this milestone and moved down to the ‘red’ tier because as a county we worked hard, looked out for one another and came together to defeat the dark winter surge.

“Although we are taking steps to re-open some of the hardest hit sectors of our economy, that in no way means we can drop our guard now,” she said. “We owe it to our neighbors, our local businesses, and our children to remain vigilant so that the re-openings are safe and long-lasting — wearing masks and physical distancing remain critical.”

AMC Theatres announced that it will reopen its Century City 15 and Burbank 16 theaters on Monday afternoon, with the balance of its movie houses opening March 19.

“As we have done at more than 525 locations around the country, AMC will reopen with the highest devotion to the health and safety of our guests and associates through our AMC Safe & Clean policies and protocols, which were developed in consultation with Clorox and with current and former faculty at the prestigious Harvard University School of Public Health,” AMC President/CEO Adam Aron said.

Regal did not list any new showtimes on its sites. Neither did Arclight.

Such big-budget action fare as “Godzilla vs. Kong,” Marvel’s “Black Widow,” “F9” (the latest in the Fast and Furious franchise), and Disney’s “Jungle Cruise” are expected to welcome moviegoers back to the great indoors in the weeks ahead.

Laemmle Theatres, which specializes in foreign films and prestige pictures, said it would be screening again within five weeks.

“Details are still being finalized regarding exactly which locations will open first and what percentage capacities will be allowed, so make sure to stay tuned for further updates,” said Gabriel Laemmle in a weekend blog post. “In the meantime, you can help by remaining diligent with your COVID safety protocols and best practices. We’ve spotted land on the horizon – now is no time to jump ship.”