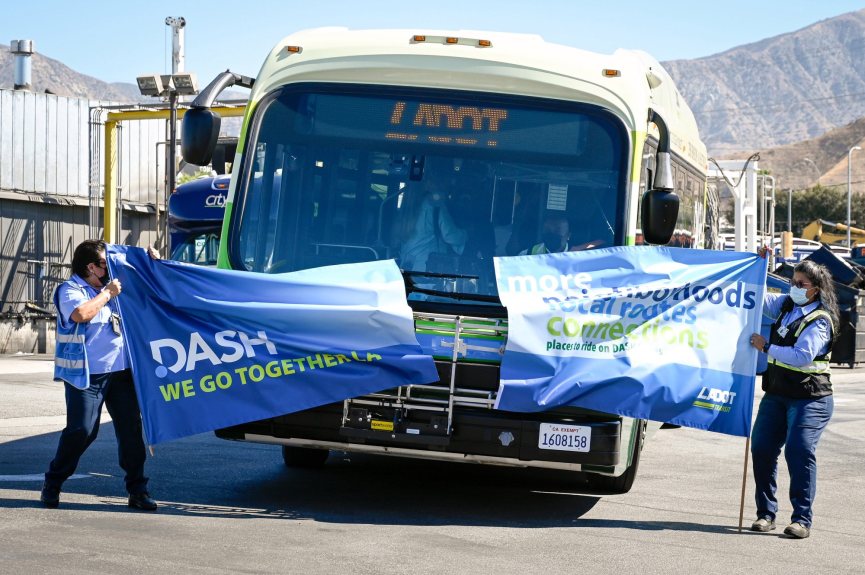 The DASH Sylmar route is now running between the Sylmar/San Fernando Metrolink Station and Mission College. Buses are running every 15 minutes on weekdays from 6 a.m. to 7 p.m. and every 30 minutes from 9 a.m. to 6 p.m.

The launch was the first of several new DASH routes planned as part of an expansion to bring bus service to areas that lack access to public transportation and have high numbers of households without vehicles.

The new route launched on Saturday and serves the Sylmar area, running on Hubbard Street between the Sylmar/San Fernando Metrolink Station and Mission College. After reaching the college, buses along the route will travel on Eldridge Avenue to Sayre Street, then along Sayre to Borden Avenue before turning back onto Hubbard at Seventh and reaching Sylmar/San Fernando Metrolink station.

“Owning a vehicle is a luxury many in our community cannot afford, which is why I secured funding to study route expansions in my district. I’m proud to deliver an affordable, clean and convenient DASH line that will provide access to critical destinations and transit hubs that meet the public transportation needs for our community,” Councilwoman Monica Rodriguez said Monday.

“For too long, lack of transit options has been a barrier to opportunity in too many Los Angeles neighborhoods,” LADOT General Manager Seleta Reynolds said. “At LADOT, we’re pushing to achieve Universal Basic Mobility through service expansions like our new Sylmar Community DASH and many others to come.”

LADOT’s DASH expansion plan was adopted in 2019, and other initiatives include changes to DASH Downtown LA Routes D and E, weekend services on all DASH routes, evening service on DASH Downtown routes, new Commuter Express service for Playa Vista and El Segundo, increased benefits for Cityride customers, and the introduction on the Westside of an on-demand, shared-ride service called LAnow.

Through 2024, LADOT will also add new DASH routes to other areas and add more frequent service on existing routes.

Thirty new electric DASH buses will operate on the route. Each bus costs about $600,000 and should provide 12 years of service, officials said.