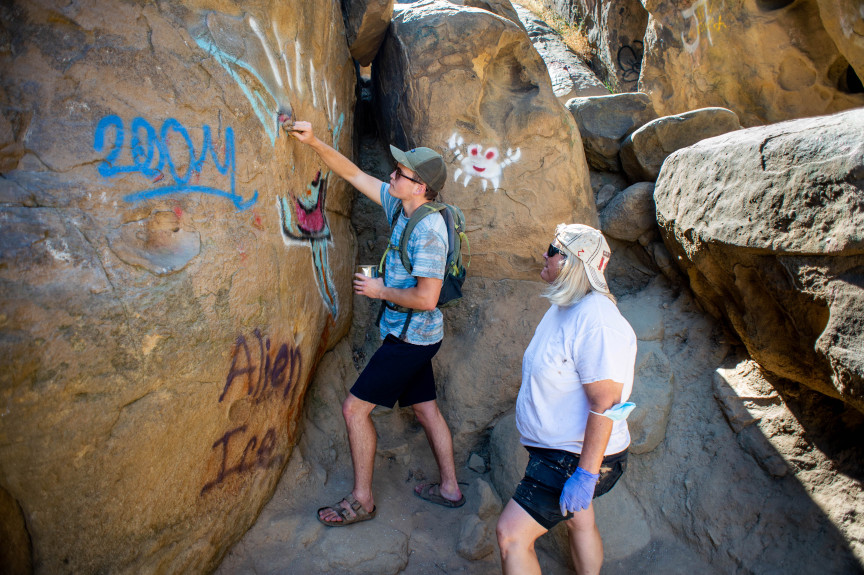 It begins with a mother and her 20-year-old son taking a hike together one Saturday morning three months ago along the trails of Los Angeles Cultural and Historical Monument 132 in Chatsworth.

You know it as Stoney Point, an outcropping that originated in the Pacific Ocean more than 65 million years ago around Central America, and now sits on 81 acres near the onramp to the 118 freeway at Topanga Canyon Boulevard.

It’s been home to outlaws and Indian tribes, and evolved into a popular area for rock climbers, hikers, and, unfortunately now, taggers leaving behind their graffiti on the boulders.

Fonda Hart has lived in the San Fernando Valley her whole life and never hiked Stoney Point. She thought it would be too tough. Her son, Sage, home from college on the weekends, disagreed. There were pathways to walk on, it wasn’t all climbing over boulders and large rocks as she assumed.

She finally relented, and with a little help from her son made it up the mountain where she was appalled by the amount of graffiti she saw along the trails. She couldn’t understand anyone who would want to destroy so much natural beauty.

Go for it, mom, Sage said – and she did. She went over to Home Depot and bought a few quarts of a paint shade called Distant Land that matched as closely as possible the now mostly tan color of the rocks.

She put the paint in her backpack with some sponges, a stirrer, water, and trash bags, and hiked back up the mountain the next weekend by herself to cover the graffiti.

When Sage is home from school he carries one gallon of the $40 a gallon paint in his backpack, and hand carries two more gallons. They work Saturday and Sunday from 7 a.m. until the paint is gone.

“We’ve always been close, but now we’re hanging out with a purpose,” Fonda says. “My old generation and his young generation. My goal is to stand in one place, do a 360, and not see any graffiti.”

Her efforts didn’t go unnoticed. Hikers and climbers would yell encouragement to her and Sage, some offering to help. She met members of the Trailmothers, a group of moms picking up trash left behind by visitors with no conscience. Some of them will be helping her cover the graffiti, too.

Neighborhood groups reached out to her. Teachers looking for community service work for their students called her, as did other mothers looking for something with a purpose to do with their own son.

“It’s exploded, everyone wants to help,” Fonda says. “My end goal is to get volunteers to do maintenance and cover an area once a month. First, though, we have to get ahead of the problem.

“Stoney Point was never a tagging destination, but with COVID-19 too many kids are bored with nothing to do, so I think some of them have turned to graffiti. It’s just so sad what they’re doing to those beautiful rocks.”

In addition to covering new graffiti, she’s been painting over the work of others who used an inferior paint and did bad coverups.

“What we’re doing is not perfect, but people aren’t going to be leaving Stoney Point now thinking, ‘My God, there’s so much graffiti.”

She could have just said, “somebody should do something about this,” but she didn’t. She went out and did it herself – put the paint on her credit card and gave Los Angeles Cultural and Historical Monument 132 her weekends.

And, that makes Fonda Hurt special in my book. I hope you agree.