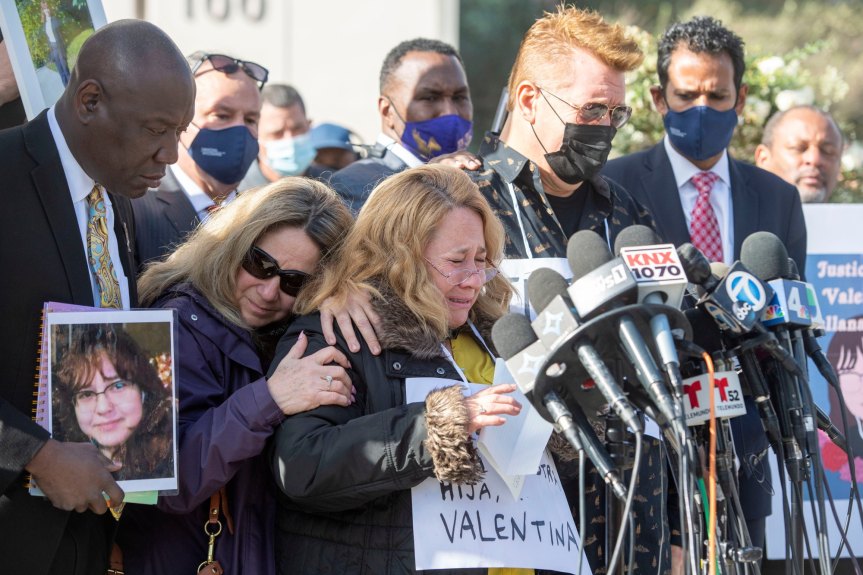 The mother of Valentina Orellana Peralta, the 14-year-old girl killed by a Los Angeles police officer in a shooting last Thursday at a North Hollywood Burlington store, on Tuesday described clinging to her daughter inside a dressing room stall after hearing screams and loud noises.

“She went and locked the door to try to protect us,” Soledad Peralta, sobbing and shaking, said in Spanish.  “We started hugging each other tight as we heard more loud noises and commotion.” Her daughter had been trying on dresses for Christmas.

“A white powder started coming out of Valentina’s body as she started having convulsions,” she said. “I had no idea she had been shot. Her body went limp and I tried to wake her up by shaking her. But she didn’t wake up.”

Her daughter died in her arms, she said, “the most profound pain that any human being can imagine.”

Peralta, her husband Juan Pablo Orellana Larenas, and their attorneys spoke just in front of the plaza at the front entrance of LAPD’s Downtown L.A. headquarters.

Their hands clasped together, they strode to the front of a line of news cameras to where a wreath of white flowers framed a photo of their daughter.

Both parents wore signs: “Justice for my daughter, Valentina,” in English and Spanish.

Valentina arrived in the U.S. from Chile about 6 months ago, an exceptional student with “big dreams for her future,” her mother said.

The girl hoped to become an American citizen and an engineer, her parents said.

A vigil in front of the Burlington, where Valentina Orellana-Peralta as well as Daniel Elena-Lopez were killed by LAPD gunfire. Orelanna-Peralta, 14, was hiding in a fitting room while an LAPD officer shot Elena-Lopez without verbal commands after several alleged assaults. pic.twitter.com/o3ziD1QPNM

She was inside the second-floor dressing room when an LAPD officer spotted a woman who had just been beaten with a flexible bike lock by the 24-year-old suspect Daniel Elena Lopez. The officer fired at the man from about 10 feet away.

The bullets he fired struck Elena Lopez, killing him.

At least one of the rounds pierced the wall just behind him, hitting Valentina and killing her.

On orders from Chief Michel Moore, LAPD released video of the shooting on Monday. The video shows the perspective of several officers from their body-worn cameras rolling during much of the incident. Police also took security camera footage from the store and audio of 911 calls of panicking store employees trying to evacuate the building while Elena Lopez went on a rampage.

Rahul Ravipudi, an attorney for Orellana Larenas, said Tuesday he believed there was more footage LAPD had not released. He said attorneys for the family sent a letter demanding LAPD preserve all evidence from the shooting.

A letter demanding preservation of evidence is a preliminary step to filing a complaint, and eventually a civil lawsuit. However, attorneys for the family Tuesday did not say whether they were going to sue the police department over the shooting.

With the family Tuesday was another attorney, Ben Crump. Over the last two years, Crump has represented the families of Breonna Taylor, George Floyd, and Jacob Blake, all victims in high-profile cases of police violence that set off a national reckoning over policing in America.

“This never should have happened,” Crump said. “This 14-year-old girl should not have ended up as collateral damage in a shooting at a shopping plaza.”

LAPD declined to comment Tuesday, pointing to the earlier release of information. Besides statements made last week immediately after the shooting, leaders for the city and the police department have not appeared in public to talk about the incident.

Moore, who typically speaks to reporters Tuesday afternoon, canceled his appearance. And the Los Angeles Police Commission, whose members will review the shooting after LAPD completes its investigation, canceled its meeting Tuesday as well.

Outside police headquarters Tuesday, an anguished Orellana Larenas held up a skateboard as he spoke about all of the Christmas activities he had been planning for him and his daughter.

Orellana Larenas was to fly in from Chile to spend the holidays with her. He spoke of talking to Valentina in the days before his flight, about her good grades from the past semester, and of excitedly planning to go to a Los Angeles Lakers game together.

The skateboard was something his daughter bought on her own online. She told her father how she wanted to show off to her skateboarding friends at school when she returned from Christmas break.

The gifts he bought Valentina now will be placed on her grave, her father said.

“It is like my whole heart has been ripped out of my body,” Orellana Larenas said through his attorney. “The pain of opening the Christmas presents meant for her, that would have been delivered for Christmas Day, cannot be articulated.”