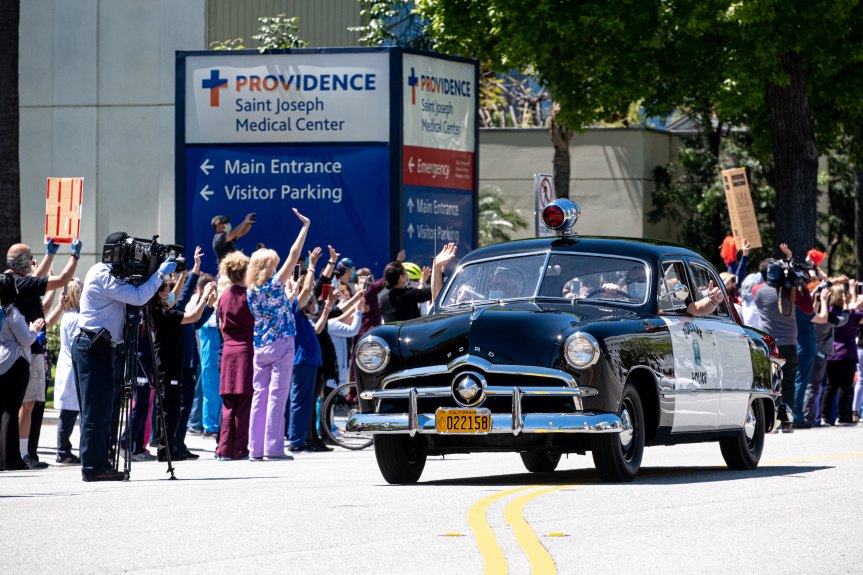 A. Yes, Mario, there are strict laws, spelled out in the California Vehicle Code.

The police agency selling the retired squad car must paint at least part of it and remove any decals so it is clear it is no longer a cop car.

So bye-bye to any paint scheme with a black body and white doors. In fact, back in 2005, Best Buy, after the California Highway Patrol complained, repainted its Geek Squad Beetles because their resemblance was too close to black-and-white squad cars.

Ian Hoey, a California Highway Patrol officer who doubles as an agency spokesman out of the Sacramento headquarters, has pulled over a couple of cars for appearing to violate the law.

One was a black-and-white whose owner was a cop-car aficionado. It carried Nevada license plates; the driver was just visiting the Golden State. From the side of the road, Hoey made a quick call to Nevada and was told that color scheme was legal there. California has agreements with some states giving visiting vehicles waivers on particular laws.

He also pulled over a driver with a former black-and-white iconic Crown Victoria. The offender didn’t live in Nevada, was cited and took it to court.

“He lost,” the good officer recalled.

Spotlights on decommissioned cars must be covered when cruising about. Any blue lights most definitely gotta go.

There are exceptions under state law about black-and-whites, include allowing governments, historical societies and museums to have realistic-looking squad cars if only driven when traffic is closed off to the general public, such as during parades and celebrations.

Q. Hello Honk. I have a problem with cars that have windows that are darkened to the point of not being able to see the car’s driver. I cannot tell if the motorist sees me when they are making a turn. I have this problem when driving a car or riding a bicycle. What is the law on dark driver-side windows, and what can the police do about them?

A. Cops don’t like walking up to drivers after pulling them over and not being able to see them, either.

Basically, the front windshield and the motorist’s and the front passenger’s side windows can’t be tinted darker than what comes from the manufacturer.

The back windows can be tinted as dark as Darth Vader’s getup, but there should be two side mirrors to help compensate – although in Honk’s clear-minded view that still makes it too tough on the motorist to see possible trouble.

A law enforcement officer can pull over a violator at any time and cite him or her for front tinted windows.

And, yes, Honk is well aware the roads are filled with vehicles with heavily tinted front windows, and for that matter there are many cars and trucks missing front license plates, too, which is another violation.

Each officer can decide whether the violation merits a ticket or there are worse, more-dangerous offenders to zero in on.