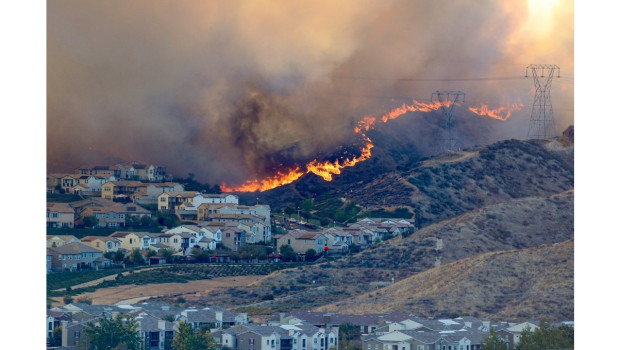 A wind-driven brush fire prompted evacuations Wednesday afternoon near the Llano area, east of Palmdale, and destroyed at least one structure, but crews later gained the upper hand.

The Pine fire erupted for unknown reasons about 1:30 p.m. in the rural community of Piñon Hills near the Antelope (138) Highway and 248th Street East, according to the Los Angeles County Fire Department. As of 4:45 p.m., crews estimated the three-alarm blaze at 180 acres.

By about 9 p.m., the fire was measured at 450 acres with containment of 15%, fire agencies said. Forward progress of the blaze had been halted.

Mandatory evacuation orders were issued about 3:35 p.m. for the areas of Antelope Highway to Pine View Road and Buchanan Road to Smoke Tree Road. About 100 homes were evacuated, according to Cal Fire.

Most evacuations were later lifted, with a small number of homes still evacuated in Los Angeles County, west of Jubilee Road, Cal Fire and the L.A. County Fire Department announced just after 9 p.m.

A stretch of Highway 138, which was closed while crews battled the fire, was later reopened.

The flames earlier were driven eastward toward Phelan, San Bernardino County, by winds blowing at about 18 mph, according to reports from the scene.

About 500 firefighters were fighting the flames, with help from several water-dropping helicopters and two air tankers.

The cause of the fire was under investigation.