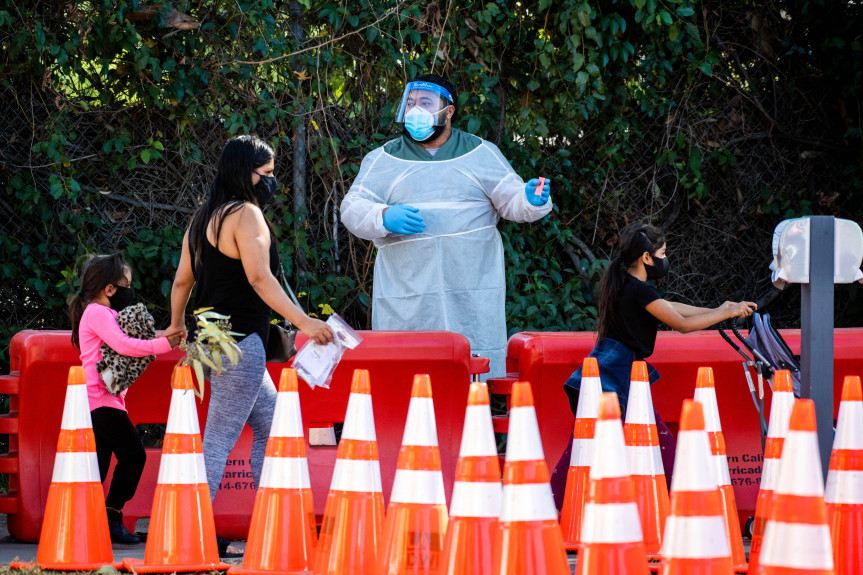 Officials vowed that millions of doses of anti-coronavirus vaccines would start rolling out across the nation on Sunday, Dec. 13, offering an echo of hope as Los Angeles County and state health officials Saturday weathered another swell of chilling pandemic statistics.

While falling short of Friday’s record-shattering numbers, Los Angeles County officials nonetheless reported 11,476 new COVID-19 cases and 70 deaths, bringing the county’s totals to 512,872 and 8,269, respectively. The county’s five-day average of new cases climbed to 10,034, up from 2,134 a month ago — an increase of 370%. During that same span, the five-day average for deaths exploded from 12 to 62, officials said.

L.A. County’s COVD-propelled hospitalizations, meanwhile, have increased 303% in the past month, fueled by Saturday’s total of 3,850 — with 22% of those patients cared for in intensive-care units.

“This is an extraordinarily challenging time,” said Public Health Director Barbara Ferrer. “Hospitals are stressed and filling up with hundreds of new COVID-19 positive patients each day, our healthcare workers are exhausted, and deaths are reaching an all-time high. Actions taken by each of us continue to make or break our collective ability to prevent many people from becoming infected, seriously ill and potentially passing away from COVID-19.”

For the fifth straight day, intensive-care bed capacity at Southern California hospitals decreased as state officials reported a 5.3% rate, nearly a percentage point down from 6.2% the day prior.

Amid the grim local news, U.S. officials continued to ramrod the first round of vaccines out to communities, with the first shipments expected to arrive in states as soon as Monday morning on the heels of Friday’s federal green light.

Initially, about 3 million doses were expected to be shipped nationwide. Local officials will decide who will receive the first shots, with health care workers and nursing home residents topping the priority lists. A similar number of shots will be held back for those recipients’ second dose, which is needed for full protection from COVID-19.

Staff and residents of nursing facilities and long-term care facilities will be among the first wave of people receiving the vaccine, right after inoculations for critical health care workers.

L.A. County expects to receive nearly 83,000 doses of the Pfizer vaccine as early as next week, with the doses being distributed to 83 acute-care hospitals throughout the county for administration to health care workers.

County officials anticipate receiving another 150,000 doses of vaccine by the end of December, followed by weekly allotments of 250,000 beginning in January.

In what’s being dubbed a time-saving measure, county officials said Friday that skilled nursing homes will directly receive allotments of the Moderna COVID-19 vaccine and administer them to staff and residents, instead of relying on a previously announced pact with CVS and Walgreens.

Ferrer said Friday that the county hopes to receive its second allotment of vaccine — about 250,000 doses of the Moderna vaccine, pending FDA approval — around Dec. 20-21. By sending the doses directly to skilled nursing facilities, the vaccine can be administered right away instead of waiting for a federal agreement with CVS and Walgreens to begin on roughly Dec. 28.

“We don’t want to wait until Dec. 28 to start the process of vaccinating residents and staff at skilled nursing facilities,” she said.

The vaccines couldn’t arrive a moment too soon, as the total number of cases reported in L.A. County surpassed the 500,000-mark on Friday amid the worsening outbreak that has killed more than 8,000 people here and nearly 300,000 nationwide.

The county on Friday reported 13,815 new cases, the highest jump in a single day since the beginning of the pandemic and the third time the daily caseload record was eclipsed in a week.

Saturday’s report brought the total number reported so far in December to 112,192. Until now, the highest number of cases reported in a month in Los Angeles County was in November, when 93,301 were reported.

While many county hospitals said they have implemented their surge plans to navigate the unrelenting outbreak, officials worried about hospitals being overrun in the weeks ahead. An extended surge, Ferrer warned on Friday, would make it “really hard to keep up with this level of demand without there being the need for there to be additional difficult decisions made by our hospitals around prioritizing some procedures over others.”

But it’s not to late to prevent that scenario, she added. “It can unfortunately end up with compromises in care that none of us ever want to experience,” Ferrer said. “And we don’t have to. We’re not there yet. The question is can we stop the surge.”

The state’s regional stay-at-home order bars gatherings of people from different households and places severe limits on businesses, including restaurants, which were forced to shut down all in-person dining, including impromptu outdoor venues created in response to July’s ban on serving customers indoors.

Under the order, the following businesses/recreational facilities were forced to close:

Schools with waivers can remain open, along with “critical infrastructure” and retail stores, which will be limited to 20% of capacity. Restaurants are restricted to takeout and delivery service only. Hotels are allowed to open “for critical infrastructure support only,” while churches would be restricted to outdoor only services. Entertainment production —including professional sports — would be allowed to continue without live audiences.

“While vaccines are around the corner, they will not be here in time to prevent compromising care for seriously ill individuals at our hospitals,” again urging residents to honor the state’s lockdown. “Only we can do that by following the public health directives: Stay home except for performing essential work and/or acquiring essential services. Always wear a face covering when out of your house and know that every single time you are with people not in your household you are running a serious risk of being exposed to the virus.”