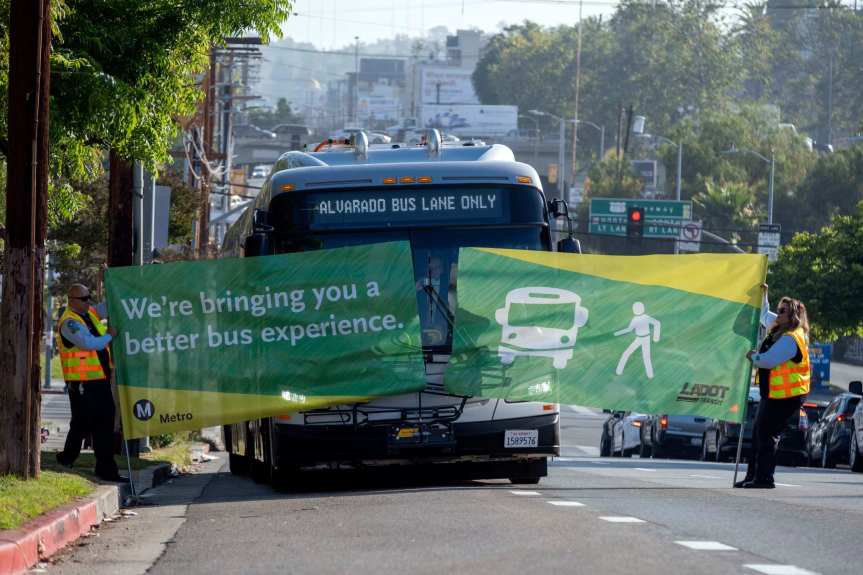 A dedicated bus lane that opened on Monday, June 28, on Alvarado Street between Seventh Street and the Hollywood (101) Freeway in the Westlake and Historic Filipinotown areas is expected to speed up service by as much as 15%.

Mayor and L.A. Metro Board Chair Eric Garcetti, who called the stretch of Alvarado “one of our city’s busiest transit corridors,” said the lane will also make it safer for cyclists and pedestrians by reducing speeding and unsafe lane changes.

The dedicated bus lane is part of Metro’s NextGen Bus Plan. Once completed, it will cover a 1.7-mile stretch from Seventh Street in Westlake to Sunset Boulevard in Echo Park.

“We are focused on getting people back to work, and how do you get people back to work? You make it easy for them to access jobs and public transit, and this new bus lane is going to help with that,” Councilman Mitch O’Farrell said.

Metro is working to increase bus stop frequency and modify routes to make them more accessible through its NextGen Bus Plan. The first phase was implemented in December, and the second phase began Sunday, when the transit agency added service on dozens of bus lines, particularly in the San Fernando and San Gabriel valleys.

“We’ve basically let lines, schedules and lanes stay the way that they’ve been for three, four, five decades. And now this is the first major overhaul to our system in 25 years,” Garcetti said. “Through this dedicated bus lane, we expect bus speeds to improve up to 15%, so Angelenos, as we return to our old ways of getting back to work and in the office, you’ll find that you’ll be able to get to where you need to go more quickly.”

Bus trips on Sundays only were added to the 105 line.

Metro Micro was also expanded into a Highland Park/Eagle Rock/Glendale zone and an Altadena/Pasadena/Sierra Madre zone.

“The idea with all of this work is to provide equitable and accessible and affordable service to create sustainable options all around us, and you don’t have to own a car to move us toward our climate goals,” Garcetti said.

Weekday rail service will also be improved with added frequency during morning and afternoon peak times on the A, E, C and L lines, according to officials with the Los Angeles County Metropolitan Transportation Authority.

The Metro Micro program, which began as a partnership with RideCo Inc., offers rides for $1 through the end of 2021. Each ride-hailing vehicle holds up to 10 passengers, and a person’s trip must start and end within the same zone.

Riders can use a mobile app to plan their trip, including on Metro Micro and bus and train rides. The average wait time is about 10 minutes, according to Metro’s website.

“The continued implementation of NextGen, expansion of MicroTransit, and installation of bus lanes is critical, especially as we enter the recovery phase of the pandemic,” Board of Supervisors Chair and Metro Vice Chair Hilda Solis said. “These efforts will help provide more frequent and faster mobility options to our transit riders, predominantly serving communities of color. When we invest in public transit, we are making a commitment to supporting our communities.”