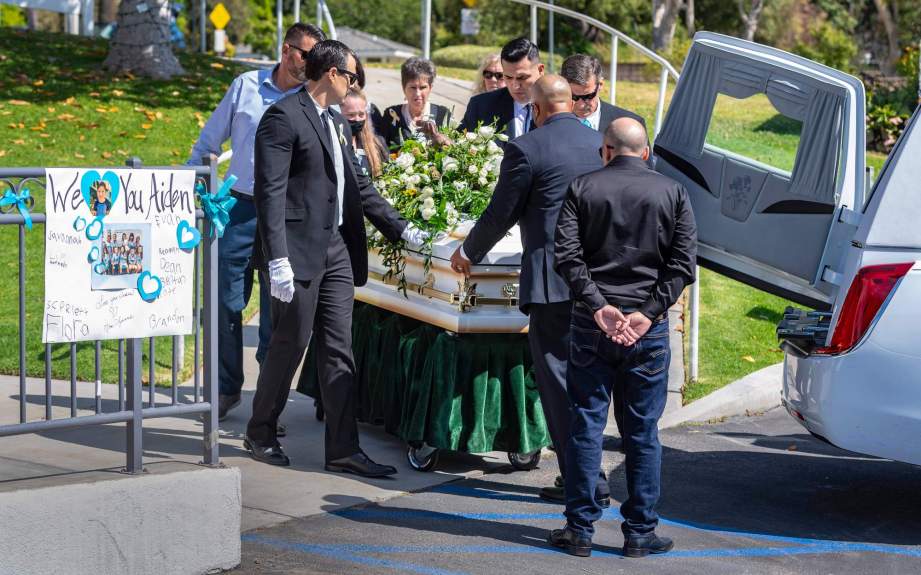 The family of Aiden Anthony Leos held a memorial service on Saturday for the 6-year-old boy who was shot to death in a suspected road-rage attack on the 55 Freeway in Orange.

The open-casket ceremony was livestreamed to the public. Those attending the service included friends, public officials and reward donors.

Aiden’s mother Joanna Cloonan described a little boy with a vocabulary beyond his years who lived to create stories around his toys and was fascinated by dinosaurs and bugs.

But more than that, Aiden wanted to help others and make them happy, she said.

“I felt such a warm tenderness exude from within Aiden,” Cloonan said. “He gave us such joy, giving us purpose to our life. I felt so honored to be Aiden’s mommy.”

She said Aiden wanted people to treat each other kindly and not resolve their differences with violence, such as the gunfire that claimed his life.

“He was given a gift from God to heal people’s hearts,” Cloonan said.

His mother also addressed the circumstances of Aiden’s death.

“I want nothing more than to find justice, though it won’t bring you back into my arms. My precious son had his life ripped away for absolutely no reason, she said.

Some of approximately 30 people watching the livestream at another church nearby in Yorba Linda dabbed their eyes with tissues during the service.

The grief and sight of Aiden may have been too much for some of the children seated in the area reserved for preschoolers.  Two women with two children each left during Cloonan’s eulogy.

The printed program included two quotes from Aiden: “My birthday wish is for everybody to be happy,” and Daddy’s the King, Mommy’s the Beautiful Princess, and I’m the Prince.”

Aiden, who lived in Costa Mesa, was riding in the back seat on May 21 as his mother drove him to kindergarten at Calvary Chapel Yorba Linda.

The California Highway Patrol said that after a dispute between Cloonan and the occupants of another vehicle, a male passenger fired at Cloonan near Chapman Avenue. The shot pierced the trunk and Aiden’s booster seat, entering his back.

Aiden’s death prompted an outpouring of grief, anger, support and money, which has funded a reward now totaling at least $500,000 for information on the shooter. The vehicle was last seen on the eastbound 91 Freeway at McKinley Avenue in Riverside, authorities said.

There were no new details on the investigation Friday afternoon, said Officer Florentino Olivera, a CHP spokesman. Anyone with information about the suspect or the involved vehicle was asked to contact the CHP’s Santa Ana office at 714 567-6000 or email santaanachptipline@chp.ca.gov.

The public was invited to watch the livestream of the service at nearby United Methodist Church.

Garrett Peter of Anaheim said he usually scrolls past news of crimes, but there was something about this one that he said got his attention and prompted him to attend the livestream.

“I’ve never been drawn to anything like this before,” said Peter, 21. But a year ago, he said, God saved him, and he felt a pull to watch the service Saturday, citing “a lot of miracles” in his life.

“I don’t know anyone with the family. But I felt like I needed to be here to show support for the family,” Peter said.

Asked about the opportunity to say goodbye to the child this way, Bagatourian said, “It’s …” before tearing up, unable to speak further.

The ceremony wound down with a tribute to Aiden, with image after image of him flashing a toothy smile, as MercyMe’s “I Can Only Imagine” played on the video.

A private graveside service will be held on Monday, the pastor said.