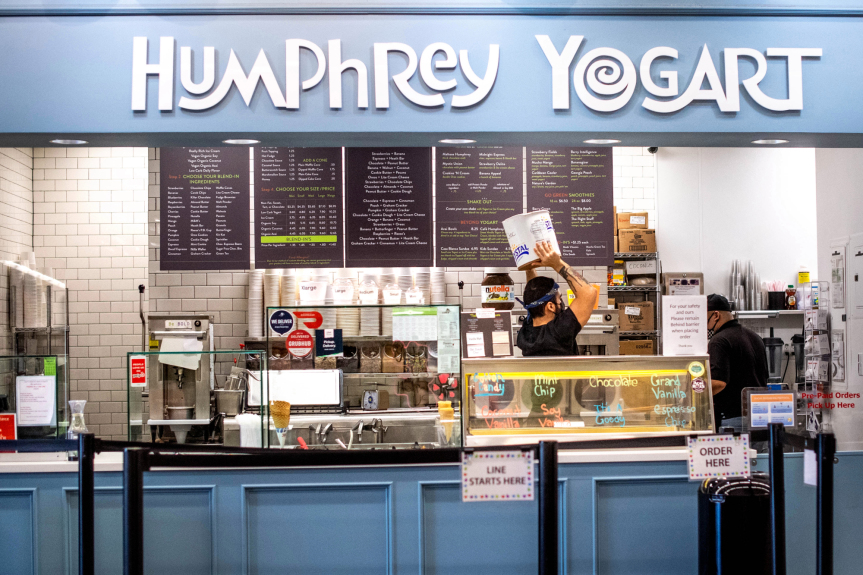 During her much ballyhooed Sunday, March 7 interview with Oprah Winfrey, former actress and current Duchess of Sussex Meghan Markle briefly mentioned that as a teen she worked at a froyo shop called Humphrey Yogart.

The quick statement was enough to set off gallons of internet buzz, as well as an avalanche of calls to the shop from British media and curious customers.

But the owner of the store didn’t have a scoop. In fact, she didn’t even remember Markle — who worked there in 1994, according to her spokesman, Creig Rogers.

“The main problem with this story is that they just don’t have any kind of story,” he said. “There’s no scoop.”

Prince Harry and Meghan Markle kiss on the steps of St George’s Chapel in Windsor Castle after their wedding in Windsor, near London, England, Saturday, May 19, 2018. (Ben Birchhall/pool photo via AP)The store, tucked in a corner of Gelson’s in Sherman Oaks, was opened in 1984 by husband-and-wife team Maria and Raphael Baker and named after Hollywood legend Humphrey Bogart. (There’s no Bogie link to this story, other than the name of the shop; though his career predated contemporary soft-serve yogurt treats. He was, however, a distant relation to Princess Diana, so there’s a vaguely royal tie.)

Rogers, a manager at the shop in the mid-1990s, said he didn’t remember Markle. At the time, the company had six other locations and about 80 employees, and Markle worked at Beverly Connection across the street from Beverly Center, Rogers said. The Sherman Oaks location is the only one that remains open.

The shop does not have a flavor named after the Duchess of Sussex and the shop owners are not planning to introduce one, Rogers said.

Markle said during her interview with Oprah that she was 13 years old when worked at Humphrey Yogart. Years later, on the day of Meghan’s wedding to Prince Harry in 2018, Humphrey Yogart offered a ceremonial discount.

“Thank God I had that life experience, thank God I had known the value of working,” she said. “My first job was when I was 13 at a frozen yogurt shop called Humphrey Yogart.”

Although no one remembers the future princess, Rogers added, the interview has been “good for business when you consider the millions of people that saw the interview and heard the name of the place.”

Following the two-hour-long interview, the shop’s sales have enjoyed a bump, Rogers said, although the shop was empty on Tuesday morning when a Southern California News Group photographer stopped by the location.

The shop has run out of its T-shirts, sold out via online orders, he added. They’re working on reordering new T-shirts in purple with the store’s logo from 1994.