Man accused of killing 2 in L.A. drive-bys before stopped in Fullerton is ID’d 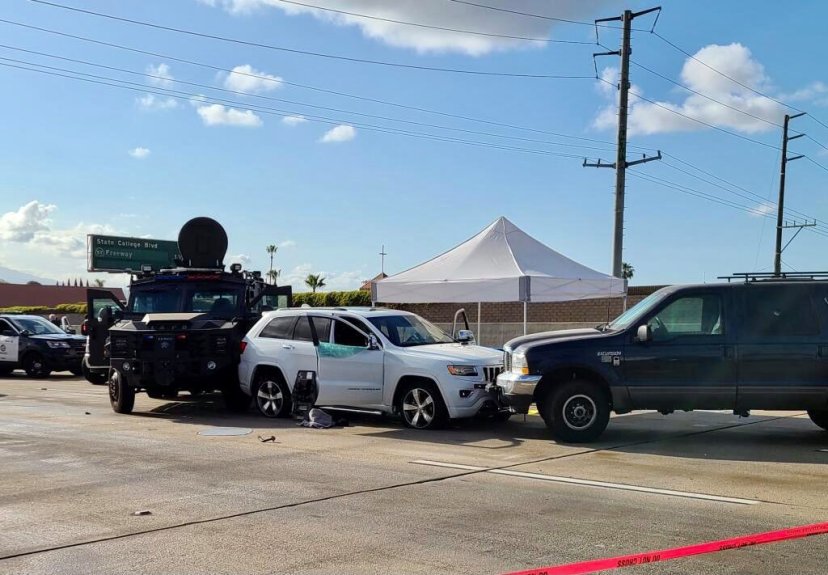 The man who apparently shot randomly at people in vehicles in Los Angeles – killing two men and wounding a third – before leading police on a chase into Orange County was 50-year-old Carlos Lopez, the Los Angeles Police Department said on Wednesday, April 28.

It was unclear what city he had lived in. The LAPD said it was investigating what motivated Lopez to shoot at people.

His cause of death had not been released, whether he was shot by at least one officer or shot himself. But the LAPD is saying he was shot at and suffered multiple gunshot wounds.

The victims who were killed, Los Angles coroner officials said, were Alexis Carbajal, 24, and Mingzhi Zhu, 42, of South Pasadena.

In the early hours of Tuesday, April 27, police say, Lopez went on a shooting spree in Exposition Park and downtown Los Angeles.

Just before 1 a.m. Tuesday Lopez drove up next to a vehicle near Exposition Boulevard and Figueroa Street and shot at the first victim, a man grazed in the head and expected to survive, police said.

Lopez then approached a newlywed couple waiting in a car in the drive-thru lane at a Starbucks at Figueroa and 28th streets, police said, with Carbajal exchanging words with him before he was shot multiple times.

About 20 minutes later, Lopez’s Jeep Cherokee pulled up next to a Cadillac Escalade at Figuroa and 7th streets, where he fired into the driver’s side window, police said, killing Zhu.

Police spotted the Jeep, and a pursuit began, with police saying he shot again and missed a driver and then hit a Tesla when apparently firing at police.

During a lenthy pursuit a spike strip was laid out in his path, and the Jeep came to a halt on the 91 Freeway in Fullerton. He remained inside.

Police tried unsuccessfully to negotiate with him, using loudspeakers, and brought in one family member to communicate with him. Their attempts to talk to him ensnarled traffic for hours.

Shortly after 5 a.m., SWAT deployed tear gas into the Jeep and Lopez shot at officers, police said, prompting them to return fire. He was found dead in the sport-utility vehicle.