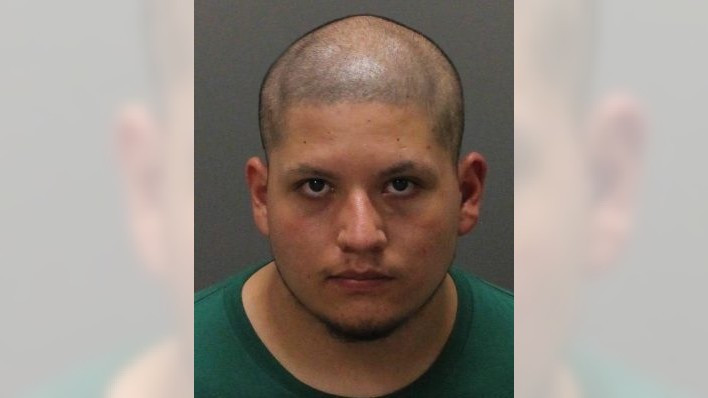 A 20-year-old man has been arrested in connection to the shooting at a Corona movie theater that killed a woman and left her friend on life support, Corona police said.

Joseph Jimenez was arrested at 8 p.m. Tuesday, July 27, at a home in the 19000 block of Envoy Avenue, about two miles north of the Regal Edwards cinema.

He was booked into Robert Presley Detention Center in Riverside at 4:07 a.m. Wednesday on suspicion of murder, attempted murder and robbery with a gun. Jimenez was being held in lieu of $2 million bail.

Goodrich graduated from Corona High School’s STEM Academy with a focus on health in June 2020 and said at the time she would attend Grand Canyon University in Arizona. She played two years of varsity volleyball for Corona, according to MaxPreps.

Barajas graduated in 2019 from Mater Dei High in Santa Ana, where he was a soccer standout and an honors student.

The shooting, police said on Wednesday, appeared to have been unprovoked.

Witness statements led detectives to Jimenez, police said without much elaboration. They searched his house and found a handgun matching the caliber of the casings found inside the theater, Cpl. Tobias Kouroubacalis said.

Video cameras inside the theater were not recording Monday night, and surveillance cameras at the shopping center, Crossings at Corona, did not assist investigators in identifying Jimenez, Kouroubacalis said.

Goodrich and Barajas had been watching the night’s last showing of “The Forever Purge,” a movie with a plot centered around all criminal laws being suspended for 12 hours, police said.

They were discovered “in or around their seats” about 11:45 p.m. when an employee entered the theater after the movie ended, Kouroubacalis said.

They had both been shot in the head and there was no evidence of a struggle, Griffits said.

The specific time of the shooting, and whether it occurred during the movie and how many shots were fired, was unclear.

Jimenez had one of the six tickets for the showing,  Kouroubacalis said. However, police had no evidence to suggest Jimenez knew Goodrich and Barajas, or that he interacted with them prior to the shooting.

Investigators believe Jimenez acted alone, but why he shot the two victims was unknown, Kouroubacalis said. Police did not have information to suggest Jimenez had any criminal history.

Police were looking for the other three movie customers.

Alex Aguilera, who lives near Jimenez and had seen him doing yard work several times when driving past, said the suspect could be intimidating until he knew you.

Jimenez would stare at passing cars and sometimes walk down the middle of Envoy, which lacks sidewalks, and refuse to move out of the way for traffic, Aguilera said.

But Jimenez wouldn’t do that to any motorist he recognized, Aguilera added.