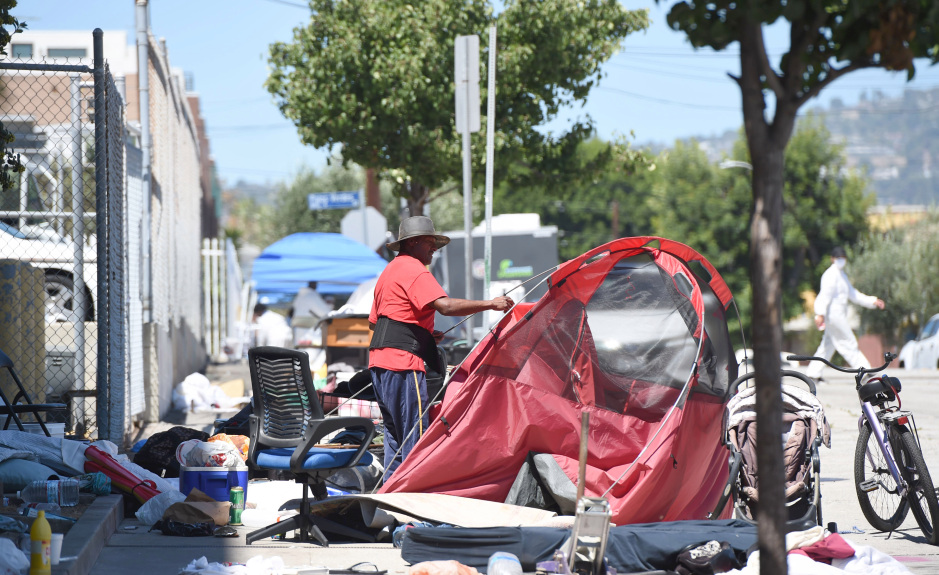 Comprehensive encampment cleanups are expected to resume at three sites in the San Pedro and Harbor City areas, under a motion approved by the Los Angeles City Council on Tuesday, Dec. 1.

Such cleanups, which require people to remove their tents and belongings for an area, were suspended in March at the start of the novel coronavirus pandemic, in response to public health guidelines that discouraged displacing people living on the streets, and not allowing them to shelter-in-place.

In July, some cleanups were resumed in certain “enforcement and cleaning” zones around homeless shelters. The approval of the motion on Tuesday adds three encampments in the 15th City Council District that are outside of those areas, where  comprehensive cleanup operations can happen.

All of the sites have “major encampments,” says Branimir Kvartuc, an aide to Councilman Joe Buscaino. The encampments are at these locations:

The goal of the cleanups are to maintain public health standards, according to council aides. Kvartuc says the cleanups, known as CARE+, are needed to remove bulky items that cannot be moved without resuming cleanups.

The CARE+ comprehensive cleanups have been unpopular among people experiencing homelessness, advocates say, and activists in recent months have conducted blockades in other parts of the city where the operations have resumed.

These cleanups are associated with the enforcement of a city law known as 56.11, which have been frequently used to clear away encampments from an area and that was subsequently challenged in court. An injunction that grew out of that lawsuit prevents the city from taking items based only on the criteria that they are bulky.

Some callers into Tuesday’s meeting who opposed the resumption of the comprehensive cleanups said such sweeps, rather than primarily promoting public health, were “violent” and led to people’s belongings being taken away or destroyed.

A homeless services provider, PATH, issued a statement stating that the organization “opposed this motion.”

“It conflicts with CDC guidance and may increase the risk of COVID exposure,” the organization wrote on Twitter. “We will continue doing all we can to keep both unhoused and house people in the area safe.”

But supporters of resuming the cleanups said they are a way to provide services to people living in encampments. One caller told the City Council that as a resident of San Pedro, which is within the 15th District, she was supportive of resuming the CARE+ program “so that people experiencing homelessness in my town can have access to COVID-testing, portable showers, trash receptacles and biohazard cleanup, all of which is part of the CARE program.” She said the program could also make public restrooms available.

Initially, the CARE+ program, launched in the fall of 2019, was meant to include similar amenities, including restrooms and regular trash and waste pick-up.

The sanitation department released a report in October saying that the cleanings that resumed in “enforcement and cleaning zones” around shelters include power washing the area being cleared and the retrieval of waste water, and those activities are “now combined” with programs that deploy mobile hygiene unit, distribute sanitation kits, and offer tent exchanges. Also included is COVID-19 testing, the report said.

Sanitation officials recommended that the comprehensive cleanings could resume beyond the zones.

“The continued co-deployment of these enhanced services are essential to protecting the health of the unsheltered population residing within ABH SECZs (A Bridge Home enforcement and cleaning zones), as well as the general public, and there is further public health benefit to expanding this model to areas outside of ABH SECZs,” the report also said.

“In the interest of public health, many areas of the city that have gone without comprehensive CARE+ cleanings need immediate sanitary services,” the report also said. The locations could be chosen “on a determination by the Director and General Manager of LASAN (the Sanitation Department), or his designee and through coordination between LASAN, Council Offices, the Board of Public Works and the UHRC,” sanitation officials said.