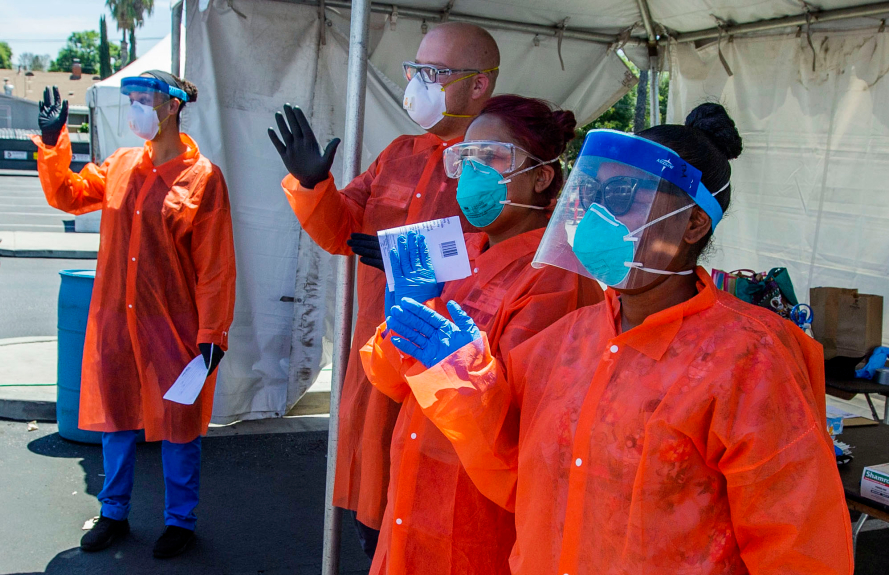 Los Angeles County moved a step closer Tuesday, Sept. 22, to advancing to the next coronavirus tracking tier in the state’s reopening blueprint, which would mean more businesses could open indoors again and capacity could expand for some of those open already.

L.A. County registered an adjusted new coronavirus case rate per day of 7.0 per 100,000 people, according to the California Department of Public Health based on data from the week ending Sept. 12. That number was also adjusted downward from the actual rate of 7.7 due to higher than average rates of testing.

More than 2.5 million people have now been tested for the coronavirus in L.A. County with 9% of all people testing positive.

The county on Tuesday reported 810 new coronavirus cases and 40 associated deaths, putting the total number of people who have contracted the coronavirus to 262,144, with 6,401 having died. At least 89 healthcare workers were among those who died, according to the Department of Public Health.

The nation also passed the grim milestone of more than 200,000 lives lost connected to the coronavirus.

Also on Tuesday, the state cleared nail salons to reopen indoors with certain modifications under the state’s “purple” tier, the most restrictive in which the county finds itself. Officials with Department of Public Health said they would first confer with the Board of Supervisors before granting approval locally but it was unclear when those discussions would take place.

Public health officials continued Tuesday to report considerable declines in hospitalizations since a peak in July. There were now 745 people in L.A. County hospitals who tested positive for the coronavirus, 28% in the intensive care unit, compared to more than 2,200 hospitalized in July.

“We are hoping that we do not see an increase in the number of daily hospitalizations in the upcoming weeks associated with activities that occurred over the Labor Day holiday,” a statement from the department said.

Moving to the “red” tier in L.A. County would mean an opportunity for restaurants, movie theaters, personal care services and places of worship to resume indoor operations at 25% capacity or 100 people, whichever is fewer. Under the “red” tier, shopping malls and retail stores now open at 25% could open at 50%. Museums, churches and movie theaters could reopen indoors at 25% capacity while gyms could reopen at 10% capacity. Schools could also begin to reopen.

Although the state grants approval, ultimate authority comes down to the L.A. County Department of Public Health, which has already shown an appetite for moving a bit slower than the state such as with outdoor cardrooms.

“Decisions get made here differently than some of the smaller districts because we want to make sure we have the necessary compliance,” Ferrer told the Board of Supervisors last week.

The other factor that goes into whether a county can progress in tiers, according to the state’s blueprint for reopening, is the percent of tests that come back positive. In L.A. County, the positivity rate over a 7-day period is now at 2.8%, low enough to land the county in the “orange” or moderate tier level. The state, however, requires that both standards be met and when different to go with the more restrictive.