Los Angeles budget scenario could include nearly 1,900 layoffs; LAPD would be hardest hit 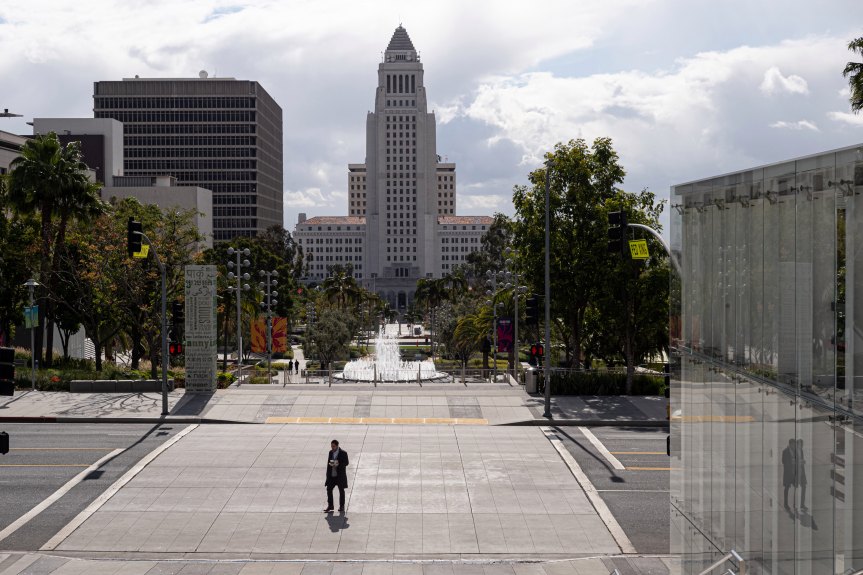 In an effort to bridge an anticipated $675 million budget shortfall in this year’s budget, Los Angeles city officials are contemplating cost-cutting measures that may lead to many layoffs, including the elimination of more than 1,600 filled positions in the Los Angeles Police Department.

In the latest quarter financial report released Friday, Dec. 4, the city’s top budget advisers said that in order to achieve an across-the-board 3% budget reduction, layoffs are needed. Under a scenario now being explored by officials, 1,894 filled positions would be eliminated to save about $45 million.

The bulk of those eliminated positions would be within the L.A. Police Department, with officials recommending a total of 951 among the sworn workforce — which include police officers — and 728 among the civilian employees for a total of 1,679 filled positions cut, in order to meet the 3% cost cutting goal.

The report said that this would bring the sworn police force down to 8,800, which matches 2002 levels.

The cuts to sworn positions could lead to the closing of police stations, the report said, as well as specialized patrols for human trafficking, cannabis enforcement, A Bridge Home shelters, alcohol sales and traffic patrols.

The elimination of civilian positions in the LAPD would affect crime-scene processing, DNA analyses, fleet maintenance and services, and public records request processing, and may lead to the closure of records units, the report said.

The city’s budget reserves had been built up over several years, ever since the last major economic downturn more than a decade ago. City officials said that it has taken only a few months for the economic effects of the novel coronavirus pandemic to potentially clean out most of those reserves.

Alex Comisar, an aide to Mayor Eric Garcetti, said that layoffs are a “last resort,” and the mayor wants to try to avoid them.

“But without assistance from Washington and solutions from our employees, deep and harmful cuts are inevitable,” he said. “The mayor is working hard to find cost savings wherever we can, and bring L.A.’s economy back as quickly as possible.”

Budget officials described the scenario as an “exercise” in the report. Labor negotiations are expected to be ongoing. City officials have asked the police officers’ union to the bargaining table, but that labor organization had rebuffed the request.

The financial status report can be viewed on the city’s website here. The City Council will be discussing the report in a special budget meeting on Monday.

The Safer at Home restrictions — including business closures and travel restrictions — reinstated in L.A. County to slow the spread of COVID-19 have worsened the outlook for the city, as well as the fear that the state could force more business closures. The revenue shortfall is expected to increase due to lower than expected receipts from November and December, officials said.

City officials had anticipated the revenue shortfall this year to be in the range between $400 million and $600 million. But budget officials now say that losses this year are more likely to be at the higher end, with all of the city’s revenue sources being affected.

“Without knowing the trajectory or end point of the pandemic itself, it is still too difficult to determine the full extent of our revenue shortfall,” the report said. “However, every revenue source has been impacted, and revenues tied to tourism, services, parking and retail are at risk of further decline.”

Los Angeles and other municipalities and governments are among those with their fates tied to a bipartisan effort in Congress to pass a new novel coronavirus relief plan, similar to what had sustained many people through the early months of the pandemic when the safer at home orders were at their strictest level.

“With too many people struggling to make ends meet and businesses doing everything they can to keep their lights on, every city across the country is facing extraordinarily difficult decisions and without substantial help from Washington, deep cuts will be unavoidable,” Councilman Bob Blumenfield said. “We can’t spend money we don’t have.”

Local officials are also calling on state officials to act to help cities.

The state has a rainy-day fund that could be tapped, and Los Angeles is in the “eye of the storm,” Councilman Kevin De Leon said in response to the budget report.

“It’s time to roll up our sleeves and work with our partners in the state and federal government to secure the funding we need to care for the 4 million people who call this city home,” De Leon said.