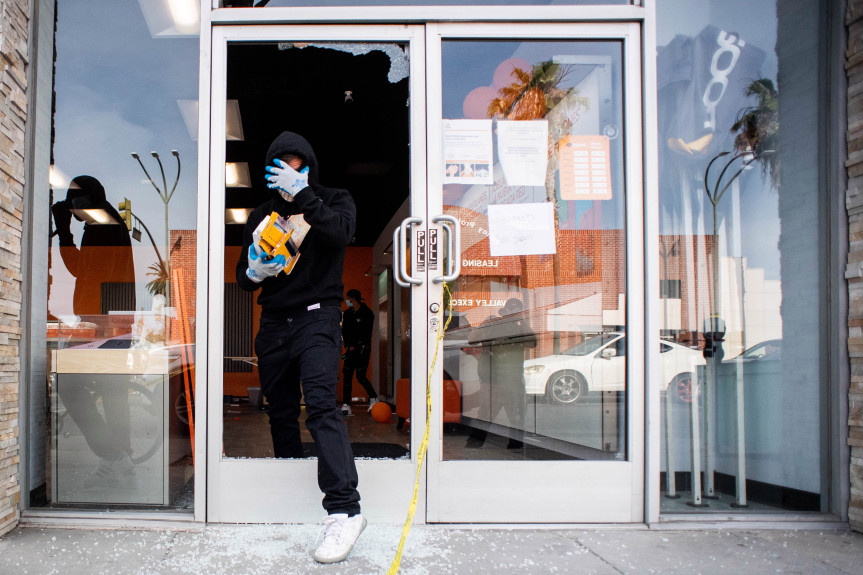 Despite word that a protest called for Monday, June 1, at the Van Nuys Civic Center had been canceled, hundreds converged in a growing demonstration against police violence and racism that provided cover for dozens of looters who hit area businesses, breaking in, taking what they could carry and running.

Police declared the event an unlawful assembly, and hundreds of LAPD and CHP officers — on foot, on motorcycles and in patrol cars — could be seen converging on the area in video from a helicopter. At least 50 law-enforcement SUVs were parked in the middle of Van Nuys Boulevard, blocking the street to traffic at Oxnard Street.

Most of the protesters had left by 5 p.m. — the time when a countywide curfew began — and about a hundred remained, in contrast to the several hundred in the area during the afternoon.

The looting continued into the evening and by about 8:30 p.m. some 60 people were arrested for looting in the area of Sherman Way and Van Nuys Blvd., LAPD Commander Jeff Bert said.

It was late in the afternoon when looters descended on the commercial strip near the Valley’s historic core.

The Boost Mobile store on Van Nuys Boulevard was among the businesses ransacked. A window was broken at the Valley Herbal Center marijuana shop on nearby Victory Boulevard.

Looters pried open the security gate, broke the window and cleared out the Super Discount Pharmacy on the 14600 block of Victory Boulevard. A number of similar businesses had also been targeted by thieves in search of codeine and other prescription narcotics, Bert said.

Media helicopters followed looters as they snaked through Van Nuys alleys, dropping of stolen goods in their vehicles and returning for more.

Late Monday afternoon, police spotted a group of suspected looters in a dark-colored Dodge Charger, prompting a police pursuit. Some suspects were seen bailing out of that car during the chase, but the pursuit was continuing as the driver circled area streets.

In the early evening, looters were seen on Twitter video hitting the Don Larry Watch & Jewelry shop on Hamlin Street and Kovac’s Care Pharmacy on nearby Gilmore Street.

LAPD officers were actively looking for looting suspects and arrested a number of them at the Walgreens. Dozens of detainees lined a curb in front of the store, seated with their arms bound behind their backs with zip ties. Police brought them one by one to the smashed front doors of the business, where officers used the light from inside to read and record suspect information.

Telemundo reported that looters broke into the Verizon store at Burbank and Van Nuys boulevards. Police swarmed the intersection and detained two suspects.

And as the evening wore on, a Van Nuys strip mall caught fire after it was broken into Monday evening.

The Los Angeles Fire Department responded at 7:19 p.m. to a blaze in one unit of the strip mall that was spreading through the attic to other units at Vanowen Street and Haskell Avenue, said spokesman Nicholas Prange.

Smoke was seen pouring from the roof in video from media helicopters. LAFD firefighters battled the blaze from a defensive standpoint. Flames gutted a cell phone store and a pharmacy, but there were no occupants in the strip mall, said Prange.

The businesses are adjacent to an apartment building. Residents there continued to hose down the smoldering remains of the burned structure after crews had mostly extinguished the fire.

Now that looters have hit the area, LAPD Lt. Justin Scott expects to see them head to a protest forming in Granada Hills. “The protesters were great — they were respectful. It’s the agitators, and it’s unfortunate they have to ruin it.”

Protesters were already converging at Chatsworth Street and Zelzah Avenue in Granada Hills, where businesses had spent the day boarding up windows, just like in Van Nuys.

About 30 officers were guarding the Van Nuys City Hall building, with demonstrators being held at the bottom of the steps to the historic structure, which was built in 1932.

Officers were also stationed in front of businesses on Van Nuys Boulevard near the Civic Center to discourage vandalism and looting.

Some in the crowd were throwing water bottles.

Police initially closed Sylvan Street but later agreed to leave it open if demonstrators remained on the sidewalk.