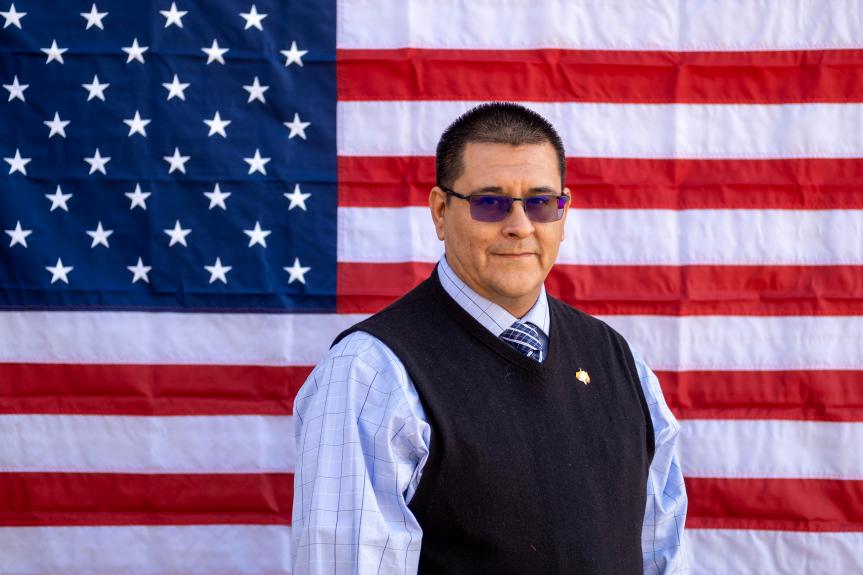 Jose Razo knew from the time he was in junior high school that he wanted to join the military. He still remembers the day a young Marine, fresh out of boot camp, visited his school, where Razo was enrolled in a junior cadet program.

“I remember him walking in and his presence, the way he carried himself, the way people turned around and looked at him with respect. … I wanted to be that person that people looked up to,” said Razo, who grew up in a housing project in Pacoima, where, in those days, the neighborhood was rife with drug and gang activity.

Today, Razo, 45, is an educator with the Los Angeles Unified School District, a career he transitioned into full time after ending his enlistment with the Marine Corps Reserve, in which he served from 1992 to 1998, rising to the rank of corporal.

And come Wednesday, Razo will add another title to his resume: that of grand marshal for the 17th annual San Fernando Valley Veterans Day Parade — an event that is taking place virtually this year due to the coronavirus pandemic.

The Marine-turned-educator said he’s honored to be named grand marshal but feels there’s “nothing special” about himself, adding that he could think of other veterans deserving of the title.

“We all joined the service to be of service,” he said. “That doesn’t stop when your enlistment ends.”

Indeed, Razo’s contributions to the community continue through his involvement with the San Fernando Valley Detachment 1277 Marine Corps League, where he serves as the senior vice commandant. Examples of the league’s involvement in the community include organizing clothes drives for veterans, delivering meals to senior citizens and supporting various Boy Scouts troops.

For Fred Flores, parade organizer and a retired Marine himself, the decision to nominate Razo seemed a no-brainer. After recovering from the coronavirus earlier this year, Razo has not let up his commitment to public service, exhibiting many of the characteristics that parade organizers like to honor on Veterans Day, Flores said

“He’s got great integrity. He’s active in his community. He’s very involved in the school. … And then he caught this virus, survived it and is still marching forward. He’s striving to take care of his community,” Flores said. “What better person to be our grand marshal this year?”

For Razo, the young Marine who visited his junior high school was not the only person to influence his decision to go into the military. His high school band teacher, Richard Gigger Jr., had served in the Army, and Razo looked up to him as a father figure.

“The way he carried himself, I wanted to be like him, “ Razo said. “He spoke and people listened. I respected him for that.”

While Razo knew early on he wanted to join the military, he first had to convince his mother to sign the paperwork to allow him to enlist early since he was still 17 when boot camp started shortly after he graduated high school. His mother was hesitant, so he made a deal with her: He would enlist in the reserve.

After training in Camp Pendleton and in three other states, Razo returned to the area and studied sociology, with an emphasis on criminology, at California State University, Northridge. His plan: to pursue a career in criminal justice.

But during his senior year in college, while talking to a friend’s father who had also served in the Marines about what it would take to become an officer, Razo was offered a job as a teacher’s assistant at Pacoima Elementary, where the friend’s father worked as the school’s principal. By that point, Razo had taught catechism classes at a local church and knew he enjoyed working with children.

He accepted the job offer and suddenly found himself on a new career path.

“It was the best thing that happened to me,” he said about that first job in the classroom.

Razo would go on to become a full-time classroom teacher and hold a couple of other positions before working as a principal for eight years, first at Lankershim Elementary in North Hollywood, then at Telfair Elementary in Pacoima, where a high number of students experience poverty as Razo had growing up.

Last year, Razo became an instructional director, overseeing 17 elementary schools in the northeastern part of San Fernando Valley. This year, he was promoted again as the administrator of operations for Local District Northeast, a role in which he oversees 122 schools.

He credits the training he received in the Marine Corps for preparing him to become an effective classroom manager and educational leader. For him, transitioning from a career in the military to one in education was quite natural.

Whether in the military or working in education, Razo said he approaches his work as a way to be of service to others.

“You just try to do what’s right by other people,” he said. “I think that as long as we try to live that life of service, regardless of what work we do, I think that we’ll be OK.”