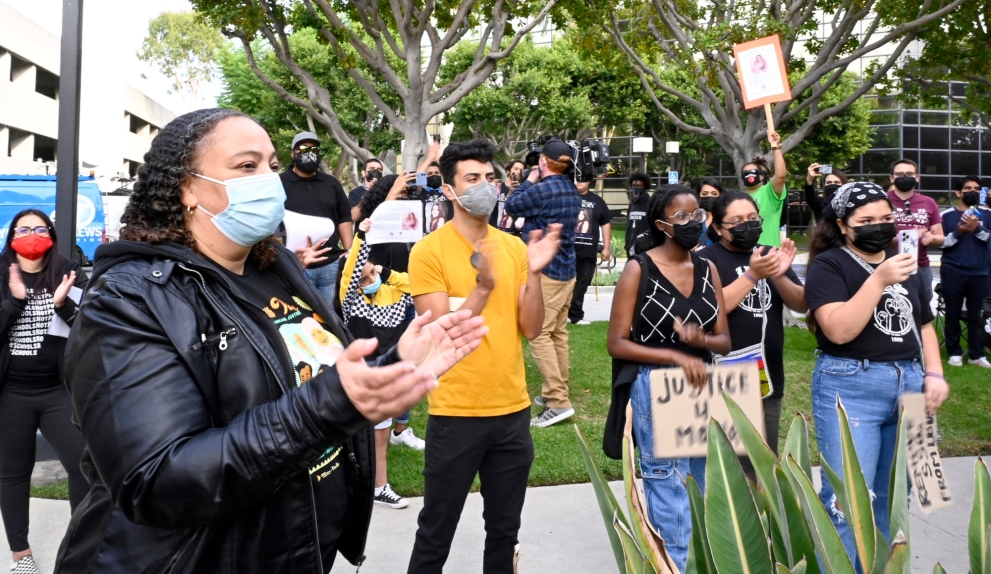 The Long Beach Unified School District has fired a school resource officer who shot and killed an 18-year-old woman in a moving car after breaking up a fight last week near Millikan High School, officials announced Wednesday.

He had been on administrative leave shortly after shooting at a moving vehicle, striking 18-year-old Mona Rodriguez in the head. Rodriguez later died.

“After our internal review, we clearly saw areas where the employee violated district policy,” Baker said during a news briefing Wednesday ahead of a scheduled board meeting. The superintendent noted that the district prohibits LBUSD staff from shooting at moving vehicles or through windows unless absolutely necessary.

She said Gonzalez’s actions did not meet policy, and that his firing was “the right thing to do.” She declined to comment on the criminal investigation into the shooting.

“The actions of one employee do not represent our thousands of employees who work each day to provide our students the best education possible,” Baker said.

Outside, dozens cheered as word of the school resource officer’s firing was announced over social media. Some in the crowd wore shirts bearing photos of the woman he killed, and carried signs urging “Justice for Mona Rodriguez.”

Authorities have said that on Sept., 27 Rodriguez was involved in a fight with a 15-year-old Millikan High School student near Spring Street and Palo Verde Avenue. Following the fight, Rodriguez, her boyfriend, Rafeul Chowdhury, and his 16-year-old brother tried to flee in a car, according to Chowdhury and Long Beach police.

A video of the incident, posted on social media, shows the school safety officer approach the car in a nearby strip mall parking lot: As the gray sedan speeds away, the officer fires two shots. Rodriguez, a passenger, was struck in the back of the head, family members have said. Chowdhury and his brother were not injured.

She was declared brain dead at the hospital and placed on life support. Rodriguez was the mother of a 5-month-old child.

Gonzalez was not a sworn officer during his employment with the Long Beach Unified School District, but had worked as an officer with the Los Alamitos and Sierra Madre police departments prior to his hiring with the district, officials said.

He worked as an officer with the Los Alamitos Police Department from Jan. 8 to April 8, 2019, said Chelsi Wilson, an administrative services manager for the city. No reason was disclosed as to why he left the Department.

He then worked with the Sierra Madre Police Department, Chief Rodrick Armalin said. Though his exact timeline of employment wasn’t immediately known, the department’s Facebook page included a September 2019 post with photos from his swearing-in ceremony. He was also featured in separate Department posts in March and April 2020.

During an introduction at a February 2019 City Council meeting, Los Alamitos Police Chief Eric Nunez said Gonzalez was a U.S. Marine and had spent 24 years working with Time Warner and Spectrum as an abuse coordinator investigator until he was laid off. Born in Los Angeles, he attended high school in Santa Ana and was a police explorer in Fullerton, Nunez said.

He graduated from the Orange County Sheriff’s Department’s regional training academy as a reserve deputy in 2015 and three years later, he was awarded the Reserve Deputy of the Year for North operations, Nunez said.

He had passed all background checks prior to his hiring on Jan. 10, 2021, LBUSD spokesman Chris Eftychiou said.

But school safety officers in Long Beach are not supposed to shoot at a moving vehicle, or through a window of a vehicle unless the circumstances warrant it as a “final means of defense,” the district’s use-of-force policy states.

The shooting was the first by an officer in the district’s 30-year school safety program, Eftychiou said last week.

Authorities have not disclosed whether a firearm was found inside the victims’ car.

Some of Rodriguez’s relatives lauded the decision to fire the officer but also want criminal charges to be filed against him.

“It’s one step further for justice for our family, for Mona and, most importantly, for her son,” said the slain woman’s cousin, 23-year-old Luis Loza. “But why did it take nine days?”

Loza said Gonzales must answer for what he did. He also said his family is urging those outraged by the shooting to refrain from violence.

“If he were here standing in front of me, I’d tell him to pray for forgiveness,” Loza said. “Because his actions took her away from all of us.”

His cousin’s organs were donated to help others. Her kidney was transplanted into a 33-year-old dialysis patient who, like Rodriguez, is a mother, Loza said. He and his relatives have received some consolation knowing his cousin has changed people’s lives for the better, even after her death.