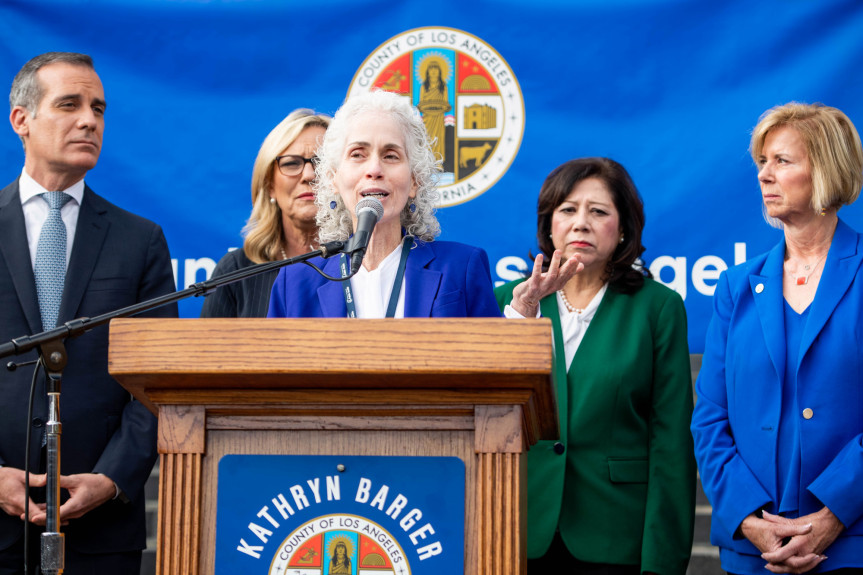 In the early days, with Los Angeles County officials still uncertain about what to make of  a mysterious virus identified in China, they turned to a simple strategy: Don’t panic.

But that message would shift drastically within mere weeks as the pandemic quickly progressed. About eight weeks later, a mammoth shutdown triggered by the first major efforts to slow the spread of COVID-19 — before that moniker was even communicated — was under way.

By the end of 2020, the county became one of the nation’s epicenters of the outbreak, which overwhelmed hospitals, jammed morgues and mortuaries and derailed the economy.

Here’s a look as how leaders’ communication evolved over those early weeks:

While speaking in front of the Board of Supervisors on Jan. 28, county Public Health Director Barbara Ferrer — back then, far from the household name she would become to county residents– said an LAX traveler didn’t feel well on the plane from Wuhan to L.A.

“We’re prepared to see more cases and we’re prepared for more cases to receive good treatment,” she told supervisors. “There’s no need to panic and there is no need for people to cancel their activities.”

It was important to wash hands, she said. If someone experienced flulike symptoms, they needed to stay home. There was no need to wear masks, she told supervisors.

Ferrer’s words were in line with the recommendations of other experts and physicians, including the Centers for Disease Control and Prevention.

On Feb. 4, Supervisor Kathryn Barger said that it was important not to “create hysteria but that we also let people know that this is a real concern and that they need to take precautions. It’s a fine line between the sky is falling and you need to take and here’s what you need to do. I want to reach that balance so that we are responsible for how we roll this out, so we can keep it to one (case) in L.A. County.”

Parents of school children, meanwhile, began to push officials to close schools. A petition with thousands of signatures circulated in February, urging Alhambra Unified School District to shut campuses until the outbreak ended.

On Wednesday, March 4, a day after thousands of residents spent hours in lines at voting polls for the primary election, county leaders declared a public-health emergency. Six new cases had been identified in  the previous two days.

Despite the emergency declaration, Ferrer said, “the risk for individuals to be exposed in Los Angeles County remains relatively low.” She encouraged residents to avoid hugging and hand-shaking and to stay home if they feel sick and return to work only after feeling fully recovered.

At the Board of Supervisors meeting on March 4, Supervisor Janice Hahn warned the situation could quickly escalate and questioned whether the county was doing enough to prepare for a potential pandemic.

“We’re reassuring the public ‘don’t panic,’” she said. “The risk is very low… Last week, there was only one case. Now there are only six cases, versus what I think a lot of the public is seeing on the news, me included, that we’re being asked to prepare for a global pandemic. So it feels very different to me talking about washing your hands for 20 seconds versus preparing for a pandemic.”

The following weekend, on March 8, the city hosted the Los Angeles Marathon. Ferrer didn’t recommend scrapping the race, which stretched from Downtown to the Coastline.

Garcetti said: “there is no reason to cancel it, but we ask people to just make sure that they’re being safe, make sure they’re washing their hands, make sure they’re keeping the right distances… run your free lane and don’t hug everybody afterward. But we are making sure that we don’t panic, that we have preparations.”

Twenty-seven thousand people from around the area and the nation — most of them without masks — ran along the 26-mile route. Hand-sanitizer stations lined the way.

In the days that followed, leaders around the state would begin to warn residents to stay away from sporting events, concerts and large gatherings in an attempt to halt the spread of the virus.

The county ordered the closure of bars, gyms and concert venues and limited restaurants to just take-out or delivery service.

Statewide stay-at-home orders followed on March 19 with Gov. Gavin Newsom urging residents to recognize the reality of the deadly pandemic.

The same day, Garcetti issued a similar order for his city.

Just about eight weeks after supervisors were coached not to panic, and less than two weeks after thousands of runners loped through the streets of L.A., the lockdown was on.

Looking back at those early days, Ferrer said that in January and February of last year “we did try to move quickly to change our guidance once we knew particularly about the asymptomatic spread,” she said. “Do I wish we had said something different back in January and February? Absolutely. I just wish we had known a lot more back in January, February about this virus and the best ways for us to protect each other.”

In the early days of the pandemic, “we had almost no cases here and we also had no knowledge of two things that I think changed everything for us. The first was that this virus could be spread significantly through the asymptomatic spread and because of that it was really important to think about everybody needing to wear a mask and the second thing that we really had very little ability to understand at the beginning of this pandemic was how much spread was happening because … we had almost no capacity to do testing except for those people who were the most severely ill.”

Mayor Garcetti’s office did not respond to multiple requests for comment or this story.

“The pandemic took everybody by surprise,” said former county Supervisor Zev Yaroslavsky, “which is hard for me to understand because in my days as a county supervisor we prepared for pandemics.”

The early response to coronavirus, Yaroslavsky said, lacked a “unified command” between the state’s health department and the county.

“What you ended up having is some differences of messaging between the governor and the board of supervisors, county health department and the mayor,” he said, adding that “I don’t think that any of the players in this were doing anything more than trying to do the right thing … but there were too many cooks in the kitchen.”

Yaroslavsky noted that moving forward there has to be a serious look by all government agencies at how “to have a more integrated coherent strategy to address a pandemic. We can’t go through this again.”

Supervisor Barger, meanwhile, acknowledged that early in the pandemic, “there was a lack of clarity and understanding coming from all levels as it relates to COVID.”

Even if steps had been taken days or weeks sooner, she said, it’s impossible to know if the virus wouldn’t still have spread “like a wildfire again.”

The biggest lesson she learned in the last pandemic-scarred year?

“I’ve learned that clarity and clarity first and foremost are what people want,” said Barger. “They want to understand… ‘tell us what we need to do and treat us like adults and let us do it.’ “