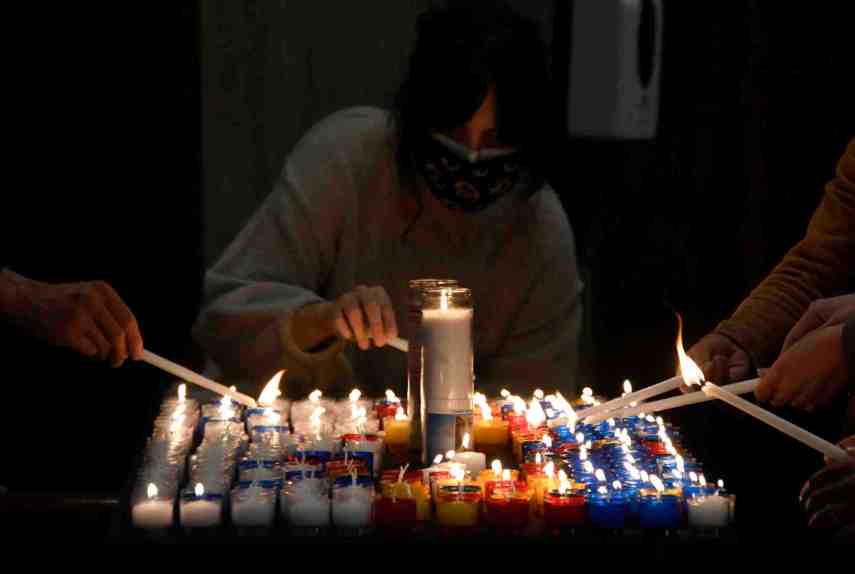 “People have passed away on these streets, but every person here has saved someone’s life.”

There was Greg, the Black Sabbath-loving man who delivered food to his neighbors along the train tracks on his bike, even during 108-degree weather, with his kitten Turbo riding in the trailer behind. When he was killed in a traffic collision on his bicycle in October, his fellow volunteers were gearing up for their weekly Sunday food-and-supply run to encampments in Chatsworth.

And there was Irma’s only daughter, Angie, who died soon after a distressing day during which a city crew swept their encampment. When their homes were getting torn down, Angie urged Irma not to cry, but ended up crying herself. The same week, following the sweep, they also lost Curley, another resident of the same encampment. He used a wheelchair to get around.

And there was Tony Goodwin, who cooked for his neighbors. People could talk to Tony, who attended a church in the San Fernando Valley aptly called “come as you are,” because he was adept at making them feel accepted. He died not long after being evicted from a Project Roomkey hotel, for missing curfews.

These folks were remembered, mourned and honored, along with those of hundreds of others, by San Fernando Valley residents who hosted a series of “longest night” memorials on Saturday, Dec. 18, for unhoused Angelenos who died during the pandemic. The memorials – staged by such groups as West Valley Homes Yes and NoHo Home Alliance — also issued a call for action to address the homeless crisis.

The event along Aetna Street, which organizers partnered with Street Watch LA to program, was one of several locations where both housed and unhoused people gathered to grieve those who died during the pandemic. In Chatsworth and Canoga Park, candles were lit as dozens of names of those who passed were read out.

Attendees shared memories of those who passed, as well as their importance to their peers, neighbors and loved ones in encampments and other sites — people without homes who came together to build communities of their own.

(Many of the people in this story asked that full names not be used, to protect them and their families from the stigma associated with homelessness.)

“We have the power to extend that love and that much concern to everyone,” said Tanya Myers, during one of the events held along Aetna Street, in Van Nuys, where a memorial had been set up for Tony and others.

“We need to show the world, Los Angeles, that we can love each other without having to be cruel,” she said.

As darkness crept in, 1,500 votive candles were lit — each representing a life lost.

Many of these deaths were premature and avoidable, attendees declared.

Los Angeles County’s homeless landscape was at crisis levels before coronavirus swept through the region. The pandemic only worsened the scenario. In January 2019, Los Angeles County had 58,936 people experiencing homelessness, but by January 2020 the number rose to 66,433. The city of Los Angeles counted 36,165 in 2019, and 41,290 in 2020.

With annual counts of the unhoused put on hold by the deadly outbreak — they are scheduled to return in January — it’s tough for officials and advocates for the homeless to assess the current numbers, but experts say it has surely grown worse. Though millions of dollars have been spent on shelters, “tiny home” villages and other short-term housing many worry that the problem still outpaces current efforts at solutions, because there is still an enduring shortage of affordable housing across the region.

Activist Carla Orendorff described her early efforts to help people on the streets, at the memorial event on Aetna Street in Van. Nuys. On one of her first trips to an encampment not far from Saturday’s memorial, she found herself amid a barbecue — a wake to honor a young man who had died at age 21.

“What I thought I was going to do is going to help people, and what I learned is this is a place, this is a street, where many people come to for help, and for support — to take care of each other,” Orendorff said.

“People have passed away on these streets, but every person here has saved someone’s life.”

A recent UCLA report highlighted that nearly 1,500 unhoused people in L.A. died during the pandemic. That prompted the groups who put on the event to issue a call to action.

Tony, who died despite being recently connected to a Project Roomkey site, was included in the report. On Saturday, Orendorff provided a leather coat that he wore to hang on a wall where a memorial had sprung up in recent weeks.

That memorial that initially was targeted for removal by city crews, but received pushback from activists and residents of the encampments.

“Knowing there are Tonys out here is what keeps people alive. I know it’s what’s kept me alive.”

Those who live on the streets, Orendorff said, can become intimately aware of how to survive.

For example, some can pick up signs of hypothermia in a neighbor quickly enough to come to their aid. That’s something she and many others would not have caught, she said.

Some work to bring water to others, she said, allowing them “peace of mind,” one less thing to worry about as they try to survive on the street.

It’s like a war, she said, a fight to survive. “It’s now gotten so much worse, that war has been intensified,” she said. Sometimes, it feels like deaths come daily, she said.

The event along Aetna Street was one of several locations where both housed and unhoused people gathered to grieve those who died during the pandemic. In Chatsworth and Canoga Park, candles were lit as dozens of names of those who passed were read out.

Irma Rodriguez Reyes, who had changed into a flowing top for the memorial, was among those who came out from her home — a makeshift tent structure set up down the street — to light a candle for her daughter, Angie.

Her message to her daughter —  “I miss you so much” — was written on a small card hung on a strand of garland.

Rafael Rebolledo came to remember his uncle, Jose Felix. He described him as a humble person who “lifted everybody up” with his smile and friendly attitude.

“He’s really missed,” he said. “People like that really matter.”

They died of myriad causes, said Kim Olsen, a board member of one of the San Fernando Valley groups that organized the memorials — COVID-19, traffic collisions, suicide, stroke and, in some cases, drug overdoses.

Katherine Tattersfield, who went on outreach runs with Greg, who died in October in a traffic collision, was still visibly affected by the loss of her friend. They met during the summer of 2020, when “nobody was vaccinated.”

She remembered him cheerfully toughing out the unbearable heat to pass out food and supplies to his neighbors on the tracks. Greg, nicknamed “Hell Rider,” was a bit of a contradiction. He loved the steely grind of heavy-metal music, but was filled with tenderness, eager to care for others from his friends, to Turbo the kitten, to folks with whom he sometimes clashed with.

Tattersfield recalled Greg had a “big fight” with a neighbor, but later he helped fix their car. “He was very mechanically inclined,” she explained.

Greg’s neighbors came out out last month to stage their own remembrance, with many constructing elaborate works in his honor. On Saturday, one of those pieces, made up of shiny tinsel, artificial flowers and toy skeleton hands, was affixed to a lamp post not far from a “ghost bike” — Greg’s old cycle, spray-painted white as a memorial.

Sadly, Greg’s friends don’t know where his cat is. They tried, to no avail, to find her through the local shelter.

Next to a card on a garland that read “Hell Rider,” for Greg, hung another: “Turbo.”

Help end homelessness, she urged, by helping to create city that is more equitable, more kind.

Some committed to getting to know the people living in the encampments near her own home, and to help provide water at encampments.

Another said they wanted to fight to “end criminalization of poverty” and to speak out against city laws such as LAMC 41.18, which bans sitting, sleeping and lying on public streets.

St. Matthew’s is the home base of NoHo Home Alliance, which runs a drop-in center, serves meals and engages in outreach. They help get people housed — and to work through important logistical problems, such as replacing lost IDs and offer a location to receive mail.

At the church, Theo Henderson, an unhoused journalist, read a poem.

It expressed his feelings about the “fear and disgust” more often directed at the unhoused than even feelings of compassion.

“It haunts me, how you will remember me,” he recited. “The world watched me die only to be remembered in a lie. Cruelty and disinterest is my sad reward.

“Watch the fear and hate when I move forward.”

Henderson urged the audience to respond with a callback: “Do you see me?”

Behind him, a line of people streamed up to light the candles arranged around the altar of the church, each one creating warmth that those concentrating on the task could feel grow.

“It is a sad but beautiful sight,” she said.