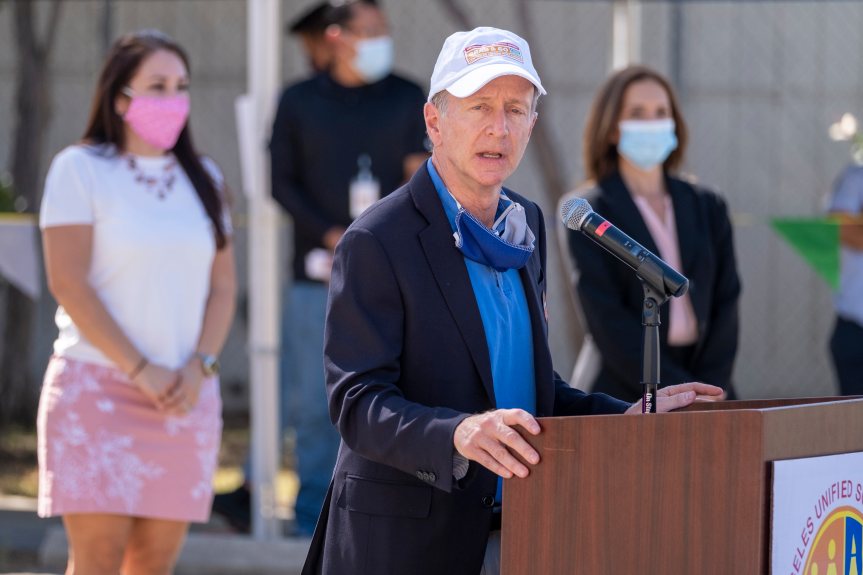 In a more conciliatory tone than the statement he fired off Friday — in which Los Angeles Unified schools chief Austin Beutner accused L.A. City Councilman Joe Buscaino of political grandstanding after the council member suggested looking at legal options to force LAUSD to reopen schools — the superintendent  on Monday, Feb. 8, appealed to “all who care so much about schools” to work toward a common goal.

At the same time, Beutner, who also told city leaders to “stop scapegoating schools” in his remarks last week, called on local and state officials to join him in a 60-day challenge to reopen elementary schools. The comment signaled that the nation’s second-largest school district may not expect a general return of students to campuses for at least two more months.

“Threats of lawsuits, finger pointing and speech making won’t help,” Beutner, who never mentioned Buscaino by name, said during his weekly update. “I call on every state and local official as well as every stakeholder in the school community to join us in the challenge. Let’s roll up our sleeves and get to work. Call it the 60-day challenge to offer every young student the learning opportunity they deserve.”

The superintendent has maintained that three things must happen for schools to reopen: COVID-19 cases must come down in the county, schools must have proper safety protocols in place and staff who work on campuses must be vaccinated.

Beutner made a plea to those with decision-making powers to prioritize vaccinating another 25,000 LAUSD employees who work at preschool and elementary school sites but aren’t currently eligible for inoculation under state and county priority systems. Getting them vaccinated will put the district on a path to reopening elementary schools that serve about 250,000 children, which in turn will help about half a million parents return to work, Beutner said.

“Vaccinate 25,000 people and reopen elementary schools in the nation’s second largest school district. Sounds simple to me,” he said.

Educators are among the next group of California residents eligible to receive the COVID vaccines.

LA County Public Health Director Barbara Ferrer said Monday her department is working with all 80 school districts in the county to provide vaccines to school employees, but noted that supplies from the federal government remain unpredictable.

“We can’t make any commitments for vaccines to any one district until we know how much vaccine we will be getting,” she said.

Although vaccination is one key component to reopening schools, bringing the level of COVID cases is also critical. School districts in LA County have never qualified for full school reopenings because the number of COVID cases in the area have never been low enough to meet state or county reopening standards, and LAUSD officials have complained that state and local decisions to allow venues such as malls and card rooms to resume operations before it’s safe for classrooms to welcome students back only delay schools’ ability to reopen.

Beyond waiting for public health authorities to give the OK for general school reopenings, the district is also still seeking buy-in from United Teachers Los Angeles, the only labor group in LAUSD which hasn’t reached a school reopening agreement with the district. The teachers union has maintained that even if school employees are vaccinated, it still may not be safe to return to campus because students — most of whom would be too young to be vaccinated — could still become infected and transmit the virus to their family members.

More than 80% of LAUSD families are low-income, and many parents have had to go into work throughout the pandemic, putting them at a higher risk of becoming infected with COVID. LAUSD also serves a high number of Black and Latinx families — populations which have been disproportionately impacted by the pandemic.

On Monday, teachers from San Pedro High School, which is located in the district that Buscaino represents, presented the councilman with an open letter expressing concerns over his plan to introduce a motion on Tuesday asking the city attorney to explore legal options to compel LAUSD to reopen schools.

The letter, which stated that school reopenings should include a comprehensive plan to vaccinate not only educators but the families they serve, had been signed by nearly 800 educators, parents and students as of Monday morning, according to Maya Suzuki Daniels, a UTLA chapter leader who teaches at San Pedro High.

Buscaino did not respond to a request for comment.

On Friday, the councilman acknowledged that schools in L.A. County can’t fully reopen yet by law, but that LAUSD can start to provide in-person services to high-needs students, up to 25% of a school’s population.

“They have the authority to do just that,” he said last week. “Why isn’t that happening today?”

As schools nationwide approach nearly a year of campus closures, there’s been mounting pressure for classrooms to reopen.

Last week, the Southern California chapter of the American Academy of Pediatrics called for schools to reopen, and the head of the U.S. Centers for Disease Control and Prevention said it’s OK to reopen schools before teachers are vaccinated — a position which Gov. Gavin Newsom backed.

Some 200 healthcare professionals from LA County also signed an open letter urging schools to reopen as soon as possible, saying that the harm to students’ emotional and mental wellbeing from being kept out of school so long is worse than the potential risk of a viral transmission.

Over the weekend, the San Francisco school district reached a tentative agreement with its teachers union and other employee groups that would allow for in-person instruction even if the county is in the state’s red tier, the second-most restrictive reopening tier, if vaccines are available to staff who would be on site, or if the county advances to the orange tier — which indicates a “moderate” spread of the coronavirus — even if not all staff have been vaccinated.

In Chicago, the teachers union and school district also reached a tentative agreement over the weekend to reopen schools for students in pre-K through the eighth grade, narrowly averting a strike.