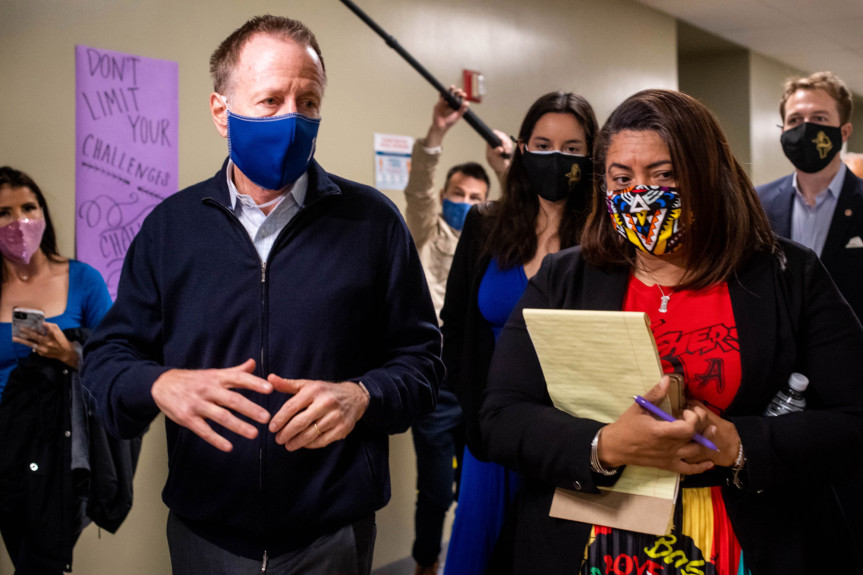 Four parents frustrated by efforts made to date to reopen classrooms in the nation’s second-largest K-12 school system are suing the Los Angeles Unified School District and local teachers union.

Their lawsuit, filed this week in Los Angeles County Superior Court, alleges that LAUSD breached its responsibility to act in the best interest of students by allowing the teachers union to dictate when schools should reopen.

Timothy Snowball, an attorney for the plaintiffs, said in an interview Wednesday, March 31, that UTLA used students as a “bargaining chip” by refusing to have its members return to campuses sooner in order to advance the union’s own agenda. For example, the complaint alleges that during negotiations with the district on reopening schools, the union wanted other issues, such as the defunding of police and single-payer, government-funded health care, to be addressed.

“UTLA used the tragedy of COVID-19 as an excuse to extract concessions based on its preferred personal and ideological policies by holding the education and future of LAUSD’s children hostage,” the complaint states. “UTLA was willing for teachers to remain out of the classroom, and children, including Plaintiffs, to suffer the mental, social, and academic consequences.”

Attorneys for the plaintiffs are part of the Freedom Foundation, which is known for taking on public employee unions throughout the country, and are working on this case pro bono.

A spokeswoman for LAUSD declined to comment on the complaint.

UTLA did not immediately respond to a request for comment. Over the course of the pandemic, UTLA officials, including the president, have insisted that the union’s stance that there should not be a rushed return to schools has been driven by their concern for the health and safety of students and their families, many of whom are people of color and who live in low-income neighborhoods that have been disproportionately impacted by the pandemic.

Although the district and union reached an agreement earlier this month to reopen schools — and students are scheduled to return to the classroom starting in a couple of weeks — Snowball said parents are worried UTLA will renege on the deal “on a whim” and that they want the district to offer in-person instruction full time.

Under the district’s hybrid program, elementary students will be on campus Monday through Friday, but some parents have complained that three hours of in-person instruction with their teachers is not enough. Middle and high school students, meanwhile, will be on campus for just half the week and will continue learning online those days instead of being taught in person by their teachers.

Snowball said his clients want the district to reopen schools full time as soon as possible, citing continued learning loss and harm to students’ mental wellbeing that distance learning has caused. Even though classrooms will reopen soon, Snowball noted that because of the hybrid model, students will continue to learn online for at least part of the time.

The four parents named as plaintiffs — identified in the complaint only by their initials — are alleging that their children have suffered academically and emotionally as a result of the prolonged school closures.

One parent reported that their 11-year-old son used to be socially active and a member of his school’s student council. But since schools closed over a year ago, the student has become depressed, addicted to video games and expressed a desire to commit suicide, according to the complaint.

Another parent has an 11-year-old child with autism who has struggled to remain focused during online learning, has become aggressive and has gained 30 pounds due to a lack of opportunity to exercise.

Citing the state Constitution, the complaint states that California law requires schools to provide at least six months of in-person instruction each year.

The plaintiffs are asking a judge to find that LAUSD has a duty to act in the best interest of students yet “breached this duty by refusing to safely return to in-person instruction according to the demands of UTLA”; that the union had “substantial assistance in” the district’s breach of its duties and that LAUSD is in violation of the state Constitution by failing to provide the required minimum amount of in-person instruction each year.

They also want the judge to issue a permanent injunction, ordering UTLA “to cease aiding and abetting LAUSD’s breach of their fiduciary duties” and to order the union to stop preventing the district from providing in-person instruction.

The plaintiffs are seeking compensatory damages equal to the annual per-pupil cost to educate a student in LAUSD — about $16,000 per child — in order to pay for tuition at another school that provides in-person learning, as well as other damages and the cost of the lawsuit, including attorney fees.