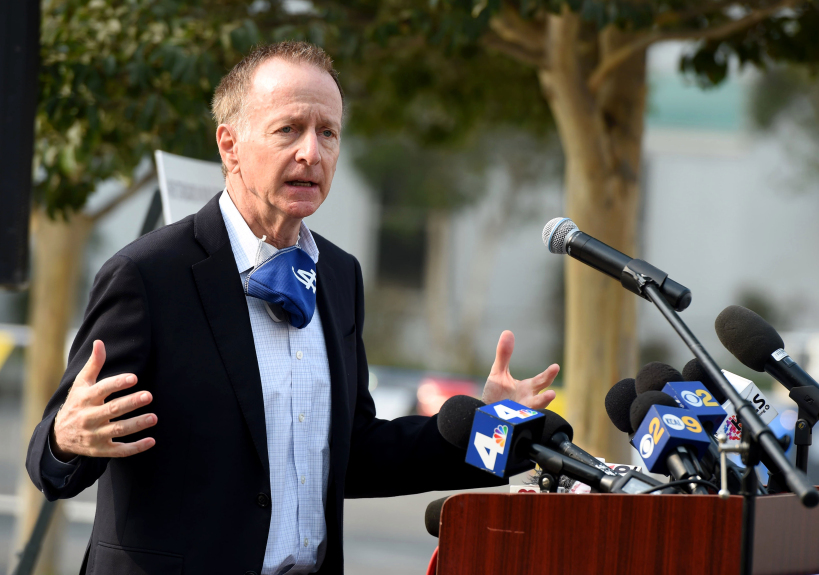 Los Angeles Unified School District Superintendent Austin Beutner called into question Monday, Oct. 19, the priorities of the Los Angeles County Department of Public Health and the Board of Supervisors in choosing to allow certain business sectors to reopen before the vast majority of schools.

As schools largely remain closed, the department allowed a series of openings in recent weeks including at outdoor casino cardrooms, breweries and parks as well as indoor malls and nail salons in accordance with state guidelines while the county was still under the most restrictive Tier 1 category.

At the same time, the county is struggling to bring down its coronavirus case rates, which is preventing it from advancing to Tier 2 and allowing schools to further reopen.

“Here in Los Angeles, it would be helpful to know more about how the virus is being spread,” Beutner said during his weekly address on Monday. “Elected officials at all levels are under lots of pressure to ‘reopen the economy.’ As card rooms, indoor malls and other venues where groups of people can gather are allowed to reopen, one starts to question priorities. If these can open without causing an increase in the spread of the virus, that makes sense. But if these openings are tied to increased cases and that increase in cases is keeping schools closed, I’ve a problem with that.”

Attempting to answer the question Monday, Los Angeles Department of Public Health Director Barbara Ferrer defended the choices made so far, saying the top priority for public officials has always been safety as the county ramped up the reopening of certain school campuses for various students.

The county has already allowed schools to reopen for a limited number of students with special needs. As of last week, 837 schools did so, teaching a combined 17,000 students with 11,000 staff members reporting to campuses currently, 72% of them public schools.

“Every one of those schools gets a site visit and a call from specialists working every day with schools,” Ferrer said. “That includes outbreak management plans… There are positive cases that have occurred at some schools that have reopened. Our team has been there to make sure positive cases don’t turn into huge outbreaks.”

The county also began last week a process for schools to apply for kindergarten through second grade waivers, but they will be limited to just 30 high-need schools per week in L.A. County, a number Beutner found insufficient considering LAUSD has 439 elementary schools and the county in total has 1,297 grade schools.

“Are similar restrictions in place for card rooms and malls?” Beutner asked.

The LAUSD Superintendent’s comments, perhaps the most powerful voice on education in the county, were echoed by Palos Verdes Peninsula Unified School District Superintendent Alex Cherniss who has been an outspoken critic of the public health department before.

Cherniss said the county’s prioritization method based on schools with the highest percentage of students receiving free or reduced cost meals did not make sense. It should be based instead, he said, on transmission data by community.

“Hundreds of thousands of students are in crisis,” Cherniss said. “Schools in regions of Los Angeles County with the lowest COVID positivity rates should be permitted to reopen. This should be the primary metric to consider reopening our schools. The county’s method of prioritizing waiver reopening based on free and reduced meals and not on positivity rates allows for schools in COVID hot spots to reopen and prohibits schools with very limited positivity rates to remain closed.”

Throughout the pandemic, public health officials have repeatedly said that decisions to open or close business sectors would be led by science and evidence. But pressed repeatedly for examples where infections had taken place at, for example, a restaurant, church or gym, officials have been unable to provide many specifics.

“We all need to better understand how these choices are being made,” Beutner said.

Ferrer shed more light Monday on data provided by the thousands of interviews completed by county employees through contact tracing. While roughly a third of all cases and contacts are refusing to provide information or not returning calls, more than 13,000 people who tested positive for the virus were interviewed between Sept. 24 and Oct. 14.

Slightly more than half were in contact with at least one other person, Ferrer said. The vast majority of contacts were in a person’s household. More than 700 were in social settings and 200 at workplaces.

More than half (55%) of those who answered that they knew of a possible exposure had attended an event or gathering where two or more people got sick with 17% at place of worship. More than 3,000 people spent time at a retail setting such as a grocery store, and 1,400 were at outdoor spaces, Ferrer said.

Still, Ferrer said, it was extremely difficult to say exactly where people contracted the virus.

“We’re still struggling around gatherings,” Ferrer said. “There are still people who don’t feel like they need to take precautions for themselves. Most of the precautions are for other people. I also think there’s a false sense of security when we are with people we know.”

Both the county and the state continued to see low numbers of hospitalizations as of Monday despite prediction in September that hospitals would see up to 89% more patients and intensive care units could be overrun.

“We project out with the best models that we have,” said California Health and Human Services Secretary Dr. Mark Ghaly on Monday. “We’re seeing a lot of movement in the numbers across the nation and globe. We are holding our course in California and hoping it keeps us on this strong and steady path.”

The number of patients in the hospital statewide who tested positive for COVID-19 was at 2,241, the lowest since April. In L.A. County there were 722 people reportedly hospitalized as of Monday.

The low number of hospitalizations belied another metric that is holding the county back, which is case rates.

Ten counties, including Los Angeles, currently remain in the state’s most restrictive tier with more than seven cases per 100,000 people per day. L.A. County on Monday reported 923 new cases and one associated death, although lower numbers are often reported on Mondays because of scaled-back weekend record-keeping. A total of 6,877 people have died in L.A. County related to the coronavirus and a total of 289,366 people have tested positive.

Almost 2.9 million people in L.A. County have now been tested for the virus.

Monday’s totals did not include updated figures from Long Beach and Pasadena, which operate their own health departments. Two new cases pushed Pasadena’s total to 2,693; its death toll remained at 129. Long Beach posted a new fatality Monday, bringing the city’s death toll to 255; 118 more coronavirus cases lifted the city’s total to 12,665.