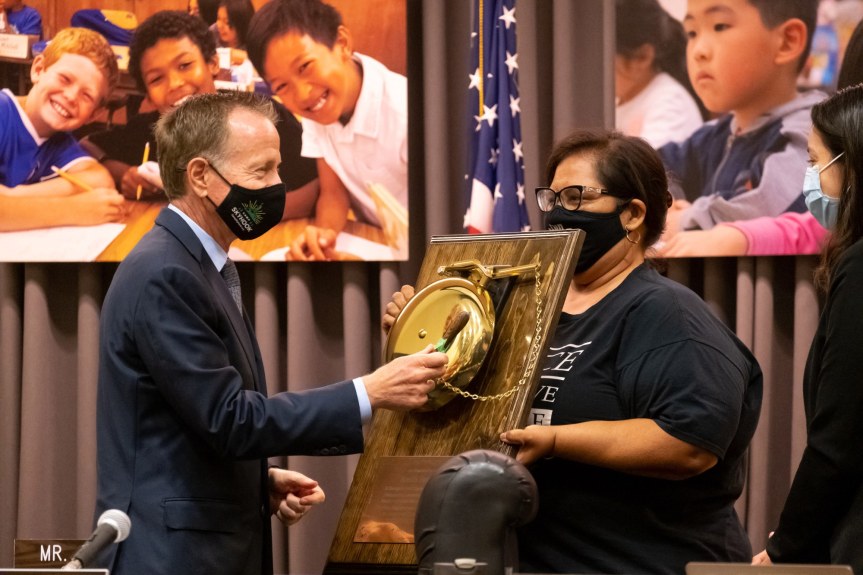 After answering the bell for three years as the chief executive of the Los Angeles Unified School District, departing Superintendent Austin Beutner got a “ringing” endorsement on his performance from the district’s school board during a special presentation at the board’s Tuesday, June 22 meeting.

During a tribute at his last board meeting at the district’s helm, Beutner was presented with a mounted school bell as a memento of his service to the mammoth organization. With LAUSD board member Monica Garcia hoisting the trophy, Beutner was able to give the oversized bell a ceremonial ring, too.

A video was shown during the meeting, featuring messages from students, teachers, administrators and parents, all expressing their thanks for the superintendent’s efforts during his oft-turbulent term.

Beutner dealt with a major labor dispute, curriculum debates and a sweeping pandemic during his turbulent term, but said he kept his focus on improving the lives of the districts students during his tenure.

He said during a recent interview that heading up the nation’s second-largest K-12 system has been one of the most challenging jobs he’s held — but also “the most rewarding.”

After three years on the job — which included 15-hour work days, seven days a week to deal with unprecedented school closures in the face of a global health crisis — Beutner, who celebrated his 61st birthday recently, said he was ready for a break.

On April 21, Beutner informed the school board that he wouldn’t return when his contract is up at the end of June.

“I’ve told the board I’m not going anywhere,” he said last month. “I want to make sure there’s a seamless transition. I’ll be around to help advise whoever my successor is.”

Whoever takes over will oversee the eventual transition from a hybrid model of learning to, presumably, full-time learning in person again, while helping many of the more than half-million students enrolled in LAUSD to recover from learning losses and the trauma they’ve endured throughout the pandemic.