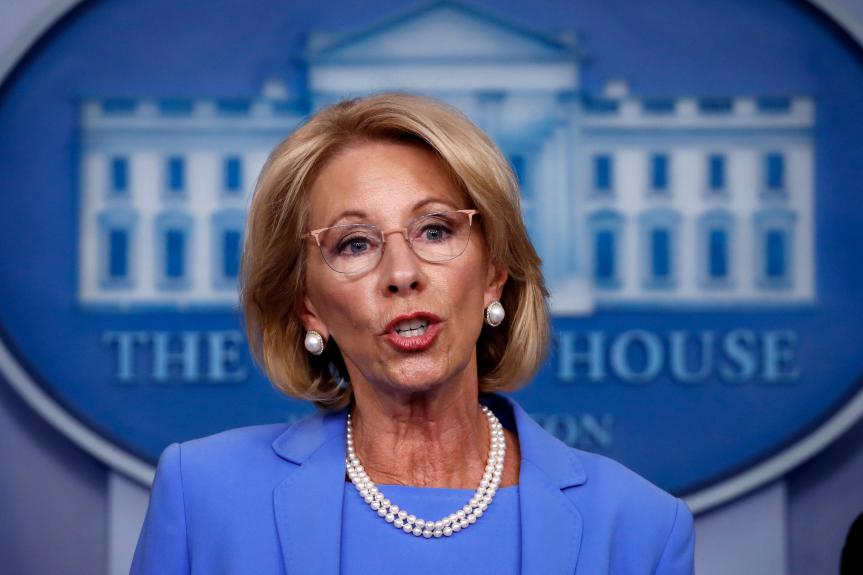 It didn’t take long for district leaders and educators in Los Angeles Unified to respond to the news that U.S. Secretary of Education Betsy DeVos had resigned.

“One of the worst Secretaries of Education in history,” school board President Kelly Gonez tweeted.

“Finally @BetsyDeVosED does something helpful for our public schools” by resigning, tweeted Nick Melvoin, another board member.

Such were the responses late Thursday, Jan. 7, when news first broke about one of the most polarizing figures in President Donald Trump’s administration of the past four years. Teachers unions and advocates of traditional public schools opposed her because of her support of charter schools and voucher programs.

On Friday, the board members continued to pile on their criticisms of DeVos while expressing optimism that the nation’s next schools chief under the Biden administration — presumably Miguel Cardona, current education commissioner in Connecticut — will be a vast improvement to DeVos.

Gonez, who served as an education policy advisor during President Barack Obama’s administration, characterized DeVos’ decision to step down when she did, saying in an email that the education secretary had an opportunity to help invoke the 25th Amendment to remove Trump from office.

“Secretary DeVos’s resignation at the 11th hour of the Trump presidency is a self-serving move, not an act of principle,” Gonez said. “She was in a position to hold Trump accountable through the 25th Amendment, and instead she chose to walk away.”

Melvoin was equally unmoved by DeVos’ decision to step down, saying in a separate interview, “I don’t give these folks any badge of courage for avoiding a sinking ship.”

In her resignation letter, DeVos, who was the second Cabinet member to resign this week, cited Trump’s rhetoric for inciting Wednesday’s mob riot at the Capitol while Congress was in session to certify the election of Joe Biden as the country’s next president. DeVos called it “the inflection point” for her and said that “impressionable children are watching” and “learning from us.”

But neither Gonez nor Melvoin were sorry to see her go, accusing DeVos of stripping civil rights protections from LGBTQ students as well as from campus sexual assault victims during her tenure.

District officials have also opposed the Trump administration’s attempt to wind down the Deferred Action for Childhood Arrivals program, an Obama-era program that gives certain immigrants who arrived to the county as young children work permits and deferment from deportation, immigration policies that separated children from their parents and the administration and its attempt to ask U.S. Census participants about their citizenship status.

With Trump’s days in office winding down, LAUSD board members expressed hope of brighter days ahead.

“I am excited to see an educator, person of color, English learner, and someone with deep experience in the public school system take over at the Department of Education,” Gonez said of Cardona, Biden’s pick to be the secretary of education. Cardona’s first priority should be to support public schools and families during the coronavirus pandemic and to work on reopening schools, Gonez said.

“He should work with the (Centers for Disease Control and Prevention) and others to ensure districts have sufficient resources to support our students, families, and educators at this time as well as science-based guidelines for how and when to reopen,” she stated.

“I know he will be an important voice in ensuring school districts can continue feeding students and families, providing internet connectivity and closing the digital divide, and ensuring learning can continue” during distance learning, she added.

After dealing with the immediate need to reopen schools, Melvoin said he’d like to see the next administration support universal pre-K programs, among other priorities. Beyond that, he’d like the new administration to reimagine how schools might operate differently, such as extended school years, longer school days and wraparound services for students.

And he’s optimistic that when he and others travel to Washington in the future to lobby on behalf of LAUSD, they’ll stand a better chance of being heard.

“We’ll be able to call up the Department of Education and have a real partner who wants to think through some of these innovative things — early education, mental health supports, supporting our DREAMers and financial aid for undocumented students,” he said.