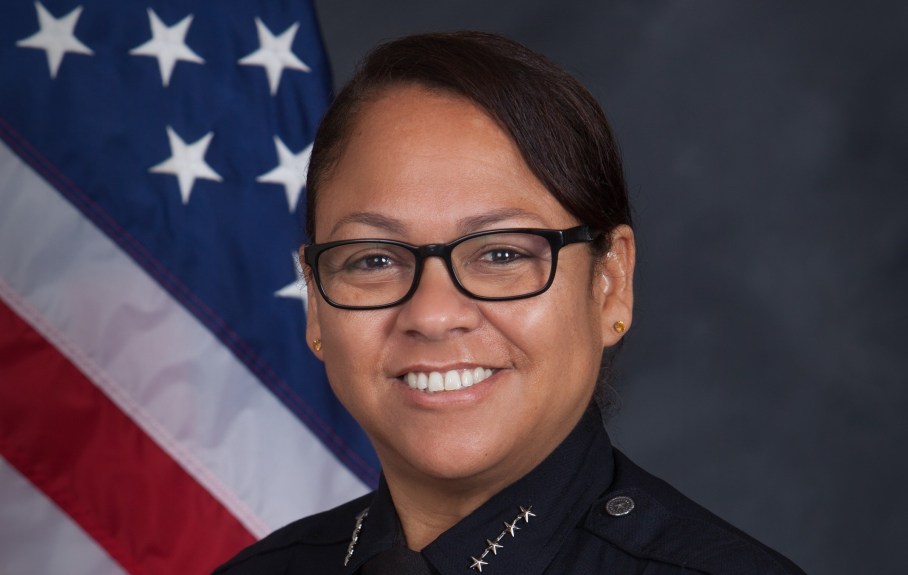 The Los Angeles Unified school board voted unanimously Tuesday, Dec. 8, to hire Leslie Ramirez as the district’s permanent police chief, a position she had on an interim basis since July after her predecessor resigned in protest of a board decision to slash the police department’s budget by $25 million.

A product of Los Angeles Unified, Ramirez graduated from Alexander Hamilton High School. She began her career as a campus officer in 1991 and previously served as a detective, sergeant, lieutenant, adjutant to the police chief and deputy police chief. Of her 29 years in law enforcement, 22 have been spent working for Los Angeles Unified, according to her bio on the district’s website.

“I am honored and privileged to have been selected as Chief of the Los Angeles School Police Department,”  Ramirez said in a statement. “As a proud Los Angeles Unified graduate and first female chief, my appointment sends a powerful message to all those who aspire to lead and serve.”

Outgoing board President Richard Vladovic, in an email, described Ramirez as a “very deserving person, who I feel will do an excellent job.”

Details of the terms and conditions of her employment were not disclosed during the meeting, as the agreement is still being finalized, though school board member Nick Melvoin said in a phone interview that his vote “was contingent upon assurance that she would be paid the same as her male predecessor.”

Ramirez took over the helm of the Los Angeles School Police Department last summer after then-Chief Todd Chamberlain resigned one day after the school board voted 4-3 to slash $25 million, or roughly 35%, from the department’s budget amid pressure from student activists and the teachers union to end police presence on campuses. The campaign was part of a larger, national conversation about defunding police departments stemming from the death of George Floyd, a Black man who stopped breathing after a White officer pressed his knee against Floyd’s neck.

Officials at the time said the cuts to LASPD would result in the loss of approximately 65 officers and the department’s overtime budget, as well as lead to other reduced services. The board’s action also called for removing officers from campuses and taking them out of their uniforms until the board heard back from a task force on policing.

“In the last few months, we began the process of reviewing and evaluating our mission, operations and district objectives,” Ramirez said Tuesday in a statement. “Our focus remains the safety of students, staff and the entire Los Angeles Unified community. The path ahead will bring a time of transition and change as we restructure our department. What remains unchanged is the importance of our role and our mission to maintain the safest educational environments and surroundings throughout the Los Angeles Unified School District.”