Las Virgenes Unified to welcome TK-2 students back to campus 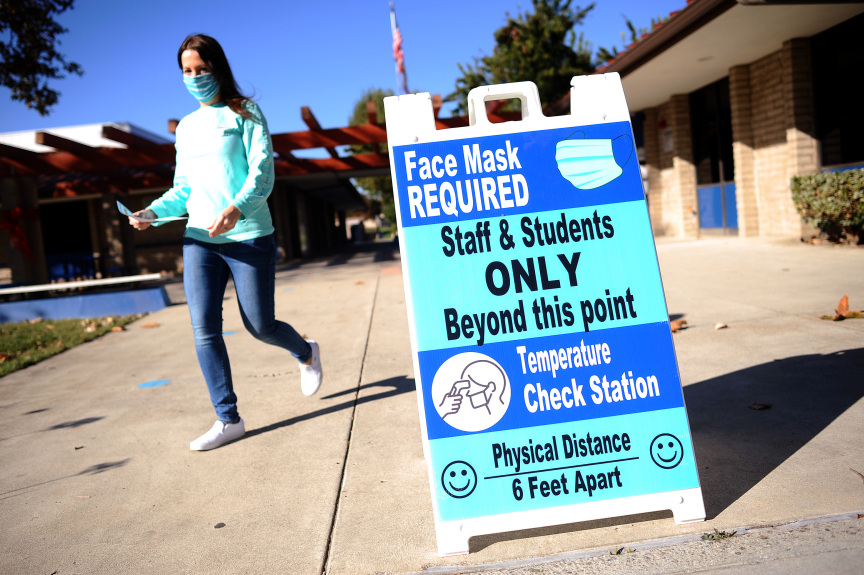 Las Virgenes Unified has become the first public school district in Los Angeles County to be granted waivers for some of its youngest learners to return to school.

All nine of its elementary schools plan to welcome students in transitional kindergarten through the second grade back to campus for half-day sessions starting Nov. 9, the district announced this week.

Twenty-nine schools in the county now have permission to bring its youngest learners back under a waiver program that the county Board of Supervisors approved late last month. So far, two-thirds of the approved schools are private schools. Of the 10 public schools that have received waivers, nine make up the Las Virgenes district. The 10th is Sycamore School, a charter school in Malibu, which also learned of its approval this week.

Families in Las Virgenes are “over the moon excited” about the reopenings, district Superintendent Dan Stepenosky said on Thursday, Oct. 29.

To keep class sizes small, the students who will return to school next month will be split up, with some attending a morning session and others attending an afternoon session Monday through Friday.

In its applications for reopening waivers, the district included letters of support from its teachers union and other employee groups, as well as from its parent organizations. The county initially mandated that schools include the letters of support, though it backed away from that stance last week and now only require applicants to attest that they’ve consulted with their employee groups.

Because Las Virgenes submitted its applications before the mandate was dropped, the district had to round up the letters of support, which Stepenosky said took about 10 days.

As of Wednesday, the county had received 153 applications, including 102 from private schools, 46 from traditional public schools and five from charter schools. The county will approve up to 30 waivers per week, though additional ones may be granted if fewer than 30 waivers were approved in prior weeks.

Stepenosky said in a message to parents that public health officials from the county visited each school site and gave the district “the highest marks for our preparation.” Since last spring, the district has purchased about $1.6 million worth of equipment, including plexiglass, face shields, personal protective equipment and ultraviolet air filters, to ensure a safe reopening of schools, the superintendent said.

But he also acknowledged that not everyone is happy about the reopening, and that the district will work with staff with medical conditions to address their individual situations.

“I think our entire staff wants to come back and miss the kids and want to be with the kids, but I think a big chunk also are worried and stressed,” he said. “There’s a whole spectrum of comfort level.”

The teachers union did not return a message seeking comment. However, its president wrote in a letter of support that was part of the waiver application that the Las Virgenes Educators Association looked forward to working with the district on a new safety compliance committee to ensure the safe return to school.

“With our recently signed Safety Memorandum of Understanding that sets up an essential and influential Safety Compliance Team, LVEA now supports your application for a TK-2 Waiver to return to in-person learning,” president Craig Hochhaus wrote.

While Stepenosky is glad that Las Virgenes can start to provide in-person instruction to its youngest learners, he said the district should have been allowed to reopen much sooner. The average daily COVID-19 case rate for the district is 3.9 cases per 100,000 people, according to the latest data on the county’s Department of Public Health website. That case rate is much lower than the county average, Stepenosky said.

L.A. County is one of the largest counties in the nation, with 80 school districts  including the nation’s second-largest district, Los Angeles Unified. Stepenosky said he appreciates the challenges the county faces in trying to manage such varied communities, but that not allowing any district to at least partially reopen to general education students until now was the wrong approach.

“Treating the county like one giant monolith, I don’t think that’s an effective approach,” Stepenosky said. “There’s wide disparity of case rates across the county.”