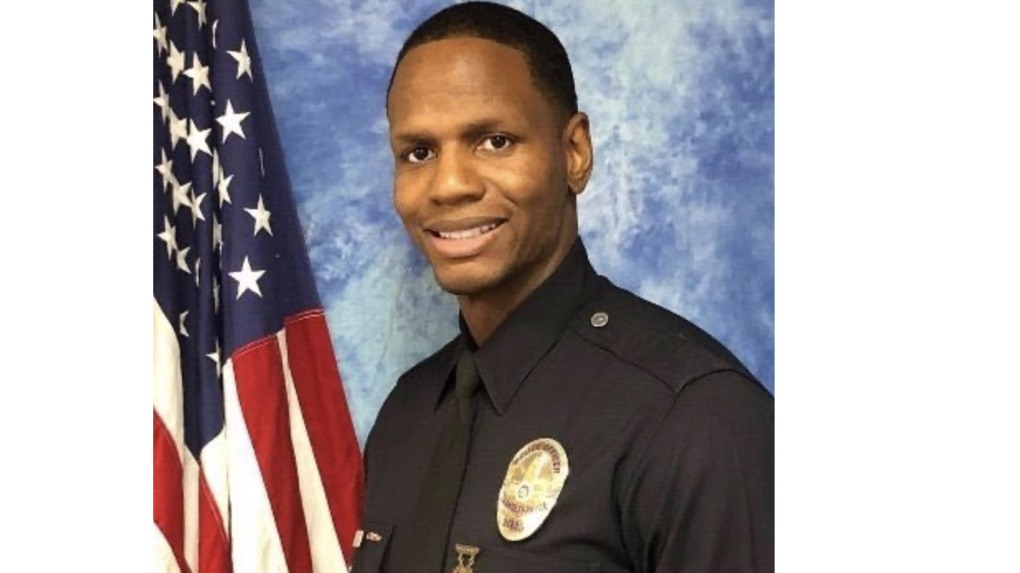 Los Angeles police Officer William Dorsey Jones Jr. saw himself as a bridge-builder, the neighborhood cop who rounded up toys for disadvantaged children, volunteered as a high school football coach and offered words of hope to those considering suicide.

Jones, 42, was labeled by one admirer in a published report as “Officer Good Guy.” Union official Thomas Saggau described Jones as the police officer he’d most like to clone.

Now Jones is at the center of a firestorm, identified Thursday as the officer who fatally shot an assailant and an innocent 14-year-old girl shopping for dresses Dec. 23 at a North Hollywood Burlington store.

With a growing chorus demanding justice for the dead girl’s family, Jones’ attorney said Thursday that the officer followed his training “to a T” despite the tragic outcome.

“He’s truly devastated at the results of the officer-involved shooting, as heartbroken a man as you can imagine,” said attorney Leslie Wilcox of Long Beach. “He was acting the way he was trained to do. It’s hard for him to see it as it is being portrayed.”

Wilcox would not discuss the shooting in detail.

How the shooting is being portrayed by some, following the release of police body-cam footage, is that Jones rushed ahead of his colleagues and fired in haste with a rifle at a fleeing suspect. One stray bullet pierced a wall and entered a dressing room where the girl, Valentina Orellana-Peralta, was hiding with her mother.

Attorney Rahul Ravipudi, representing the mother and sister of the slain girl, said it was obvious from the videos that the shooting was an unreasonable use of force and a breach of policy.

“It’s heartbreaking,” Ravipudi said. “It sounds like (Jones) is certainly not taking accountability or responsibility.”

The California Attorney General’s Office is investigating the shooting, which occurred after police were called to the clothing store because a man with a bicycle lock on a chain was assaulting customers. The suspect, Daniel Elena Lopez, 24, also was killed by Jones, who fired three times.

As the investigation continues, attention turned Thursday toward Jones and his 11-year tenure with the department, where he served as a community relations officer based in North Hollywood. A story in his college newspaper as well as his Twitter account were erased from the internet, but retrieved by Southern California News Group with the Wayback Machine.

The 2020 article in the University of Louisville paper, the U of L, said Jones was a native of Kentucky who left in 2006 to become a police officer, but later returned to the school to graduate with a degree in communications. The story said Jones grew up poor in the west end of Louisville, with his mother working multiple jobs to keep the family housed and fed.

The tweets weaved a tale of a veteran cop with a penchant for motivational phrases, an African American who belonged to both the Thin Blue Line and Black Lives Matter.

“I’m a black man. I’m the father of a black son. I’ve been the victim of racism. I am the LAPD. I have the power and determination to affect CHANGE in the community,” he wrote in one tweet. In another, Jones wrote, “Be better than you were yesterday” — words now haunting in the aftermath of the shooting.

Jones’ attorney said he and his colleagues acted by the book to resolve what he believed was an active shooter situation, before someone else could get hurt.

“This is something he says that he will be living with every day for the rest of his life. He is trying to figure out a process to keep moving forward when he knows her family can’t,” Wilcox said. “He’s just shattered.”

What makes it harder is that he was trying to build a relationship with the youth of his community and wanted to be a force for change, she said. “He thought he could be a bridge.”

In 2020, Jones created a nonprofit called Officers for Change. Its logo: a police cap with a red heart in the middle. Its mission was to help children from low-income areas. That year, Jones’ effort generated toys for 125 kids, the site said.

“I live my life as a black man that reflects honor, integrity, faith and character,” he wrote.

Writing about the terror attacks on 9/11, Jones said: “We remember those who perished that day and the courage, humanity … and bravery of the first responders who ran toward disaster in an attempt to save life and property.”