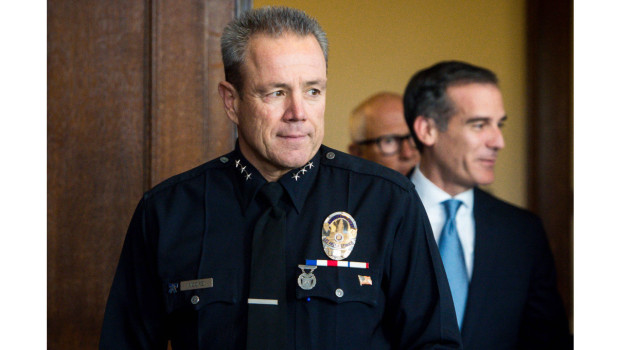 The Los Angeles Police Department officer accused of sharing an image of a mock Valentine’s Day card making light of George Floyd’s death is going before a disciplinary panel and could be fired, the chief said Tuesday, May 18.

Chief Michel Moore said he recommended the officer’s firing when he sent the case to the department’s Board of Rights.

“For removal, yes,” Moore said when L.A. Police Commission President Eileen Decker asked for clarification. The officer’s identity has not been made public by the LAPD.

The chief’s recommendation caps a two-month investigation that involved LAPD officers searching the department’s facilities to see how widely the image had been distributed.

The inquiry was launched in late February after two officers came forward saying a coworker had sent one of them an image of a pink card with Floyd’s face on it and the phrase, “You take my breath away” around Valentine’s Day.

Floyd was killed in May 2020 after Derek Chauvin, while a Minneapolis Police Department officer, kneeled on his neck and left the man unable to breath. Chauvin was convicted last month of murdering Floyd. He has appealed that decision.

An attorney for Floyd’s family members said they were “understandably outraged” by the sharing of the image, and that it showed “callousness and cruelty” toward his grieving family.

The video of Floyd’s death led to massive protests across the country. Los Angeles saw unrest; LAPD has its own frayed history with the city’s Black and Latino communities that continues to play out in city politics and at Police Commission meetings.

Moore has said he was concerned about the image potentially being shared around by LAPD officers and further damaging the community’s trust in the department. The chief said the officers who notified the department said they were disturbed by the image.

Moore also said the image investigation was part of LAPD’s attempt to purge extremists from its ranks.

In revealing the investigation, the chief said LAPD was trying to determine if anyone within the department had created the image. That took investigators to an Instagram account called “Blue Line Mafia,” where the image was originally shared.

Moore told reporters Tuesday that LAPD contacted Instagram about the account’s existence and informed it about the demeaning posts  found on the page. Instagram later took down the account.

The inquiry ended there because no crime had been committed, and LAPD didn’t have a warrant. Still, Moore said the impetus behind the search was because he’s concerned about officers being exposed to and engaging in extremism online.

“Social media gives some of the darkest voices, which would otherwise have no audience and have no ability to communicate their ideas across the entire world, the ability to share false information, hateful rhetoric, prejudice, bigotry — every ill of human existence,” Moore said  Tuesday.

So, too, has the union representing rank-and-file LAPD officers: In a statement in February, the Los Angeles Police Protective League said there should be “zero tolerance” for any officer who shared or created the image.