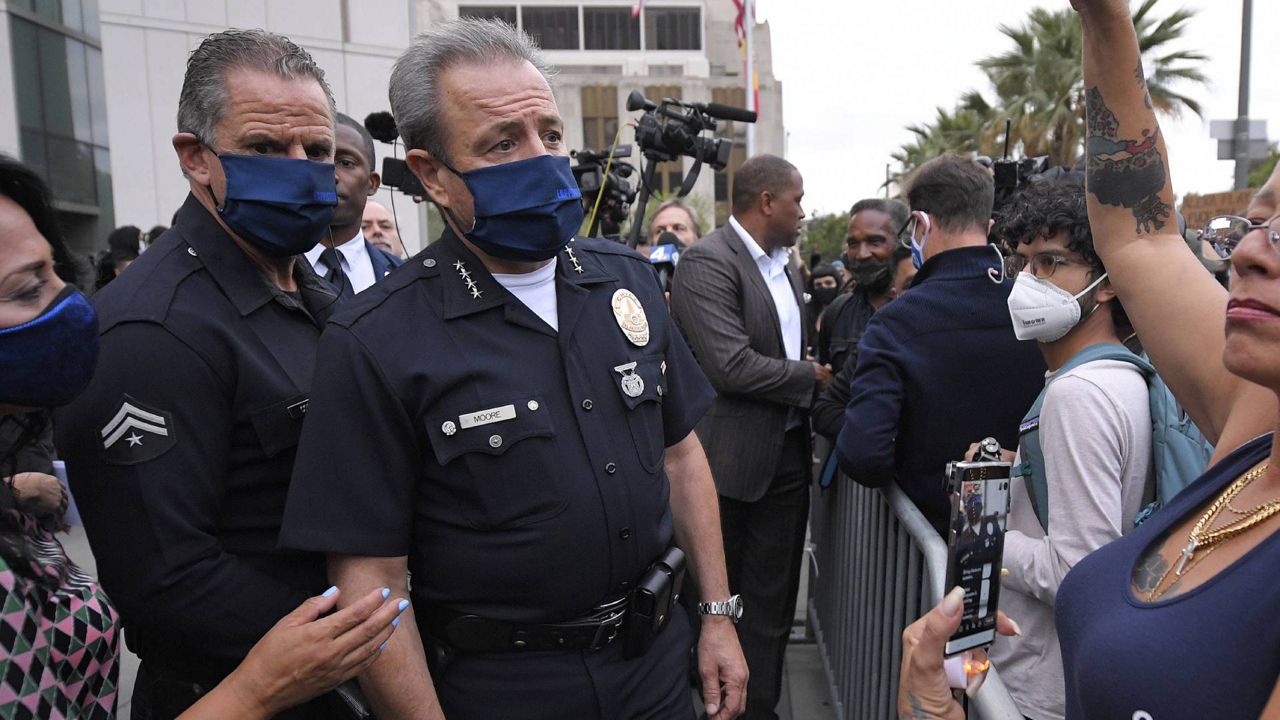 A Los Angeles Police Department officer who was accused of distributing a Valentine’s Day-themed social media post mocking the death of George Floyd was found not guilty by the department’s administrative trial board, his attorney said Tuesday, July 6.

The accused officer, who has not been publicly identified, will not face any discipline after being cleared on Friday by the department’s Board of Rights, which comprises three hearing officers, according to his attorney Leslie Wilcox.

Police Chief Michel Moore had directed the officer to the Board of Rights, in May, and told the Police Commission on May 18 that the recommendation essentially meant the sergeant should be fired. The chief cannot dismiss officers.

“The Department respects the disciplinary process and will direct employees to a board of rights where it is believed that termination is the appropriate penalty,” the LAPD said in a statement Tuesday.

The post that the officer was accused of sharing involved an image of Floyd — who was killed on May 25, 2020 after a Minneapolis police officer knelt on his neck for over eight minutes — which included the words “You take my breath away.” The police union, the Floyd family attorney and various city leaders all decried the post.

“The Board of Rights panel was absolutely correct in exonerating the officer based on the evidence of this case,” the officer’s attorney, Leslie Wilcox, told City News Service in a statement Tuesday. “The officer found the meme offensive, he did not create the meme, nor did he distribute it beyond notifying a commanding officer of its existence.

The department became aware of the photo on Feb. 12, two days before Valentine’s Day, because a group of officers saw it and were “disgusted” by the post, Moore said. The department inspected all stations for any evidence of the image and worked to identify anyone who was involved in the creation or distribution of the image, which was posted on the Blue Line Mafia Instagram page. The page has since been taken down.

In February, while discussing the post, Moore told commissioners that some in the LAPD have “extremist” views.

“We must acknowledge that some portion within our profession and by extension within this department has explicit bias and extremist views,” he said. “This is a similar conclusion that the Department of Defense has reached with its forces as it comes to terms with the members of its own armed forces being inside the Capitol this past January.”

Moore added that he believed the vast majority of the department’s personnel serve Los Angeles with “honor, integrity and compassion.”

The LAPD’s union in February expressed outrage at the post. It did not immediately provide a statement on the not-guilty verdict.

“The Los Angeles Police Protective League repudiates this abhorrent image and anyone associated with its creation, dissemination, or passive observation of it,” the union said in February.

“If that image was created, ‘liked,’ or shared by a member of the LAPD, the chief of police must act swiftly to hold those individuals accountable,” the union’s statement continued. “There must be zero tolerance for this behavior in our profession, and any police officer who feels the need to be part of any online group that engages in, promotes, and/or celebrates this type of activity should quickly rethink their career choice because they clearly don’t have the judgment, nor temperament, to be a member of law enforcement.”