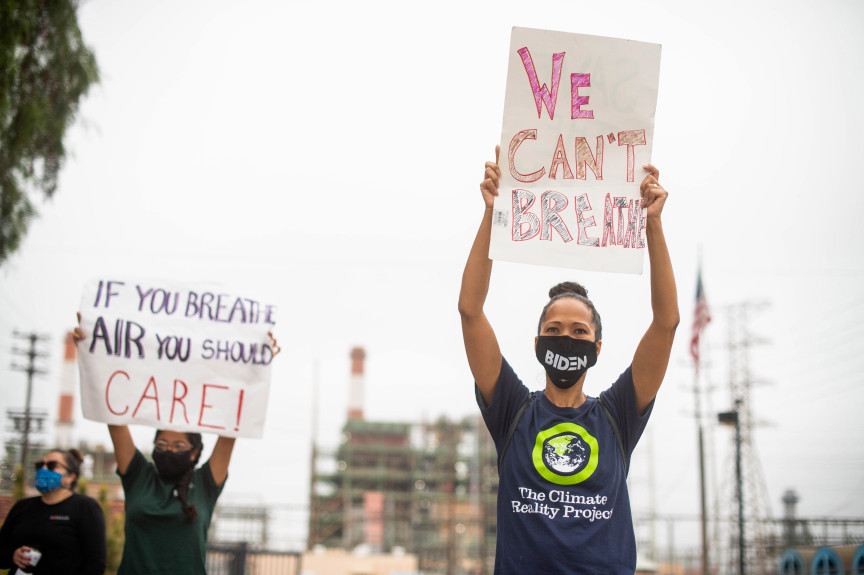 The Los Angeles Department of Water and Power on Tuesday, Sept. 8, formally acknowledged a failure to notify the public about a methane leak at its Valley Generation Plant — a leak officials knew about for at least a year before coming to light, hitting the agency’s board and the public off-guard.

The department pledged a full fix to the leak, increased methane monitoring and quicker and more transparent communication with the public about such issues.

But the measures were met with a skepticism by advocates and community members, mindful of generations of what they say has been a lack of environmental justice and accountability in a densely packed, blue-collar L.A. community of color.

“We have an obligation to keep our neighbors informed of the developments at the plant and absolutely should have done so,” Department General Manager Marty Adams said from the dais at the first DWP commission meeting since it came to light that officials at the plant had known about the leaks but had not repaired them until September. “This is an oversight in communication on our part, but not because we did not want to be honest.”

Powered by natural gas, the plant serves electricity to 460,000 residents, and officials say it has emerged as a vital L.A. electricity generator in peak demand periods, while other of the department’s sites and transmission lines are revamped for cleaner-burning fuel capacity — in accordance with the city’s and the state’s green-energy goals.

In recent days, it was a vital power generator as the region sweltered under a blanket of record heat, officials said Tuesday.

But the station’s ramped-up role in L.A.’s power system kept it from fully going offline in order for crews to fix two compressors at the heart of methane leaks that date back at least to August of last year, officials said.

Those emissions — detected first in August 2019 and most recently in August 2020 — were no surprise to DWP officials at the plant after Jet Propulsion Laboratory flyovers spotted them.

But officials did not notify the public nor the board until an Aug. 25 meeting, prompting a terse call for a formal reckoning of what happened — a reckoning that came Tuesday in the DWP commissioners’ meeting.

“While we truly didn’t feel our employees or any of the public were at risk, we also understand that we had a responsibility that we didn’t fulfill,” said Andy Kendall, senior assistant general manager for power systems at the DWP.

Officials said that it was known that the compressors — which pressurize the gas (methane is a byproduct of the production of natural gas) —  were wearing down prematurely.

“But we found that none of our employees were at any health or safety risk. We used our employees basically as a proxy for the community — so they decided not to notify the community,” he said, adding that employees wear methane detection monitors that test for danger thresholds and that by late August, LADWP worked with the SoCal Gas Co. to raise the incoming pressure of gas, which allowed one of the compressors to be taken offline to repair but to keep the plant up and running.

“The wearable monitors did not not alert for any dangerous levels,” officials said.

Ultimately, by Sept. 5, a temporary fix came, with a permanent fix coming by November, officials said.

Nancy Sutley, the department’s chief sustainability officer, characterized the emissions as confined to the internal footprint of the plant, “not near the boundary of the facility” and distant from the closest residential neighborhood a little more than a mile away.

Officials said the methane leakage has gone from 150 kg/hour to between 3 and 6 kg/per hour. They noted that “incidental fugitive emissions” are inherent in natural gas compressors, and have characterized them as “incidental.”

Still, stemming from the episode, the department will work with the South Coast Air Quality Management District on a monitoring system around the Valley Generating Plant’s 125 acres, which operates with schools and residential neighborhoods not far away; develop an air quality monitoring public data base, with real-time updates; issue a policy that “proactively identifies and repairs” methane leaks quickly; and monitor “fugitive emissions.”

But despite the breakdown, residents say they were dealt a blow to their sense of trust.

For months, local group Pacoima Beautiful has been meeting with the LADWP with a goal of seeing the generations-old plant, which employs 300 people, transformed into a renewable energy facility, in line with L.A.’s goal of being powered by 55% renewable energy by 2025 and 100% by 2045.

Just last December, the group met with LADWP officials at a local school to talk it out — and there was no word of the leaks.

That’s why Veronica Padilla-Campos was incredulous on Tuesday, and she and her fellow advocates marched outside of the plant on Sheldon Street in Sun Valley. With its trademark giant stacks — their red and white-colored stripes weathered by the elements — reaching high into the air above them, they joined L.A. City Council President Nury Martinez and Rep. Tony Cardenas, both who represent the area.

Padilla-Campos couched the leaks in the context of years of environmental pollution in the area.

Cardenas and Martinez, along with local Assemblywoman Luz Rivas have all formally demanded answers on the leak — which conjured up not-so-distant memories of the 2015 Aliso Canyon natural gas blowout, which ultimately spewed about 100,000 metric tons of methane into the air, according to the California Air Resources Board.

“We know the harmful effects caused by such gas leaks and the health risks it poses for the residents in the surrounding communities as well as the effects on the climate crisis,” Cardenas said, bewildered, along with Padilla-Campos at why only recently had the repairs been ordered.

In a neighborhood near the station, where two schools sit side-by-side, Padilla-Campos reflected with her fellow demonstrators on a community they know well — and a power station they grew up with.

They worried about potential health effects from the leaks. One reported recent dizziness and wondered if it was related. Another said a resident was complaining of recent headaches. Another had constant sniffles. It started to sound like similar complaints in the wake of the Aliso Canyon leak.

Officials were quick to point out that methane is highly flammable and is a potent greenhouse gas, accounting for 10% of greenhouse emissions in 2017, according to the EPA.

But they said less about health effects.

According to the National Institutes of Health, exposure to high levels of methane can cause effects such as headaches and dizziness, vomiting, weakness, loss of coordination and even consciousness.

DWP officials said levels were not high enough to affect workers at the plant or nearby residents.

That wasn’t enough for Andres Ramirez: policy director at Pacoima Beautiful, who said this was a moment for transparency.

“That moment was not met,” he said.