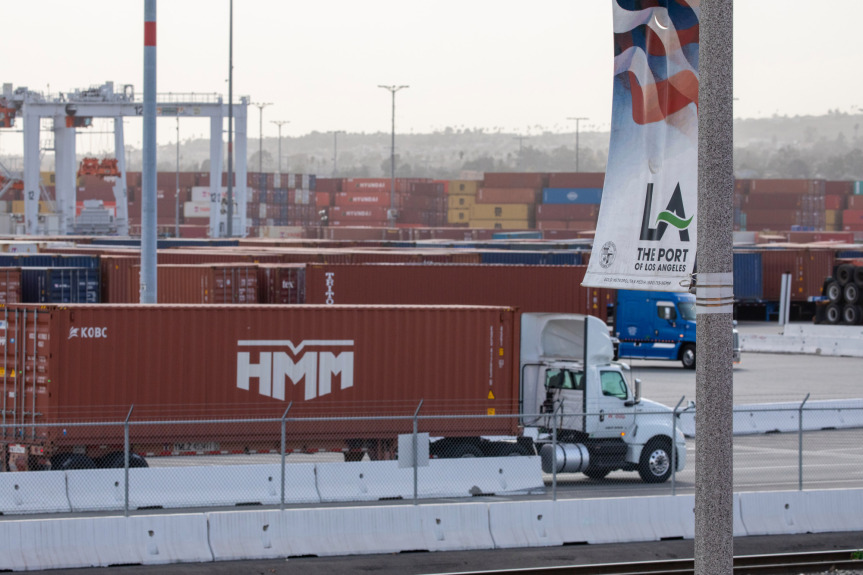 Plans at the Ports of Los Angeles and Long Beach to charge a $10 truck fee to go into a fund that would pay for a zero-emissions transition is steaming toward implementation. But one question still lingers when it comes to possible unintended consequences: Will it backfire on port truckers.

“I think we made a mistake,” Renwick said, referring to the March 2020 vote by both ports to institute the fee on cargo owners. “The goals of this are great, cleaning the air is vitally important. But, end of the day, I believe we’re enacting a system where we’re taxing $70 million to $90 million from 11,000 to 16,000 of America’s working poor.”

The concern, which has been repeatedly expressed by other commissioners and drivers themselves in the past, is that the fees will be passed on to the truckers.

“I don’t think anyone wants to oppress people,” Renwick said at the regular harbor commission meeting on Thursday, May 20, where the board approved the process to begin putting the collection infrastructure in place. “This is just an observation, but I don’t think anyone cares about these people.”

He asked fellow board members to delay approving a motion to give PortCheck, the company approved for the work, the go-ahead to begin the months-long process of setting up the Clean Truck Fund rate collection service for both the Ports of Los Angeles and Long Beach.

Specifically, Renwick wanted to wait until an ongoing port survey was completed at the end of summer that would provide more information about the owner-operator drivers who pick up and delivery cargo to the port hubs.

The survey, being undertaken by the Port of Los Angeles, is expected to provide information about how much drivers earn and other demographic information. Some 17,000 truckers serve the Ports of Los Angeles and Long Beach.

Renwick’s effort, though, didn’t succeed. The motion to move forward with getting the collection software in place was approved 4 to 1.

The Port of Long Beach commission unanimously approved the same motion on April 26, with little discussion.

Janna Sidley, the Port of Los Angeles’ attorney, said the collection agreement is specifically with the cargo owners and does not include anything outside of that deal.

“Hypothetically, (someone could) call a trucking company and say, ‘If you want my business, you’ll eat this cost,’” Sidley said. “I have no idea if that happens or if it doesn’t happen.”

The motion approved will allow the company to move forward in building the software collection system, a process that will take about seven months.

Factoring in later approvals that also will be needed from marine terminals and the Federal Maritime Commission, the system could be in place late this year or early 2022, said Heather Tomley, managing director of Planning and Environmental Affairs for the Port of Long Beach.

The program would put about $40 million apiece in each ports’ coffers every year for three years, money that would be used to reinvest in cleaner trucks.

Environmentalists at the time lobbied for a higher fee, saying the $10 per 20-foot equivalent unit, the universal cargo measurement used — which amounts to $20 for a typical load of a 40-foot container — was too low. The ports have a goal of reaching zero-emissions for trucks by 2035.

Approving the motion this week, said board members who supported the measure, would only allow the system to start being built. A separate vote will be required to actually enact the tariff at a later date.

“I’m hesitant to delay this because if the results of the (trucker) study don’t come out until the end of summer, it puts everything back,” said Jaime Lee, Los Angeles board president. “None of us wants to clean the air on the backs of these drivers.”

Gene Seroka, the Port of L.A.’s executive director, said that the fee could still be stopped at a later date — even with Thursday’s approval.

“This is an extremely complex equation on how to get newer, cleaner equipment into the hands of drivers,” Seroka said. “Today is simply (approving) the mechanism for the collection and dispersion of that $10 fee that both commissions voted on over a year ago, no more, no less.”

The trucking survey, Seroka said, “may not tell us to stop, but it may tell us to pivot to make sure we’re not impacting those who have been impacted in the past.”

But drivers also must maintain their trucks and many do not receive paid sick time or vacation pay.

Renwick, for his part, said that while the port and harbor commission did a lot of analysis before approving the $10 fee, officials didn’t have information on how it might hurt truck drivers.

“I don’t see why we think (cargo owners) won’t push it back onto truck drivers,” Renwick said, “because they push everything else back.

“I think,” he added, “we’re making a huge mistake that we’ll regret.”